The Volkswagen Type 122 is a four-cylinder air cooled gasoline engine from Volkswagen with 1,192 cm 3 capacity, which was built from 1950 to 1991.This was in vehicles such as the VW Beetle , the VW T1 and the VW Karmann Ghia Type 14 uses, as well as industrial engine available, such as in portable pumps for fire brigades, in combines, in trolleybus and as a compressor drive in Zementsilofahrzeugen.

VW 122 is a four-stroke - gasoline engine with four cylinders in boxer arrangement and air cooling . It is based essentially on the 1131 cm 3 -Motor of type 1 , from which extend through a larger hole is different from 77 mm. The piston stroke is 64 mm, thus, the 1192 cm yield 3 capacity . Looking from the exhaust side of the engine, so there is cylinder 1 front right, cylinder 2 rear right, cylinder 3 front left and cylinder 4 rear left. The firing order is 1-4-3-2. Depending on carburetor , fuel, compression ratioand regulator setting , the motor provides between 18 and 25 kW.  A technically very similar engine is the Type 126, whose displacement 1584 cm 3 is.

The crankcase of the engine from a magnesium alloy cast,  and 1968 were the alloys AZ91 and AZ81 used thereafter AS41 and AS21, by Norsk Hydro and Dow Chemical had been developed in collaboration with the University of Hannover. The diameter of the stud bolts of the crankcase was reduced from 1975 from 10 to 8 mm. Two individual cast ironcylinders  lie side by side and share a cylinder head made of an aluminum alloy. Also made of aluminum alloy produced pistons have steel inserts (Autothermikkolben) and transfer the power via connecting rods on the crankshaft . The steel forged connecting rods have an I-shaft; The big end of the ball is just divided. The die-forged crankshaft without counterweights is stored for four times, and has burning hardened bearing pin.

The crankshaft drives via spur gears a camshaft located in the crankcase , which actuates two valves per cylinder via plungers, bumpers and rocker arms . The inlet valve plate has a diameter of 31.5 mm, the outlet valve is slightly smaller at 30 mm.The air-fuel mixture is from a downdraft carburetor of the type Solex 28 PCI or in the performance engines by a Solex 28 PICTconditioned before it flows through the valves in the cylinders. The throttlein the carburetor is actuated by the throttle cable; for stationary engines, a speed governor driven by a Synchroflex timing belt; , there is the motor with both centrifugal governor as well as with a pneumatic rev.  The intake air is cleaned by an oil bath air filter. The Standardzündsystem the engine is a magneto system , but it is also a battery ignition available. Manufacturer of the spark plugs were Bosch and Beru . The flywheel of the engine also functions as a contact surface for the friction linings of the clutch . It is provided with the toothing for the starter . In addition, the engine can also be started with a hand crank. 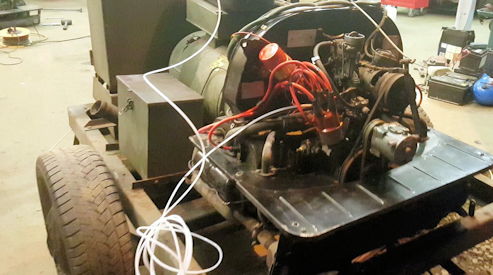 Below, the engine oil viscosity classes are listed as a function of the outside temperature.

The engine has a pressure circulation lubrication . The oil is sucked by a driven by the camshaft gear pump from the oil sump and thereby roughly cleaned over an oil screen in the crankcase. Then the oil flows through an oil cooler to the lubrication points of the engine. An oil pressure valve opens when the viscosity of the oil (for example due to low temperatures) is too high to bypass the oil cooler. As a result, the oil heats up and the viscosity decreases. The oil circuit summarizes 2.5 liters.

The engine is cooled by a radial cooling fan driven by a V-belt from the crankshaft . The fan is mounted on the armature shaft of the alternator equipped with permanently lubricated ball bearings. In versions without alternator, the fan shaft has antifriction bearings, which can be relubricated via grease nipples. The cooling air is sucked in by the fan through an opening in the front of the blower housing and fed via baffles to the ribbed cylinders. The tension of the fan belt can be adjusted on the upper pulley with shims.  The amount of cooling air is controlled by a thermostatically controlled throttle ring in the fan housing.