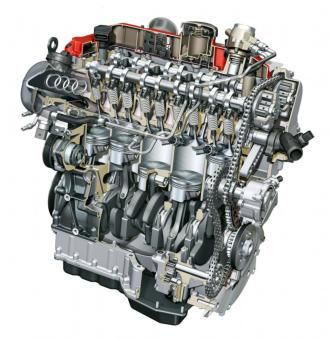 Turbocharged Direct Injection or TDI  is a design of turbodiesel engines, which feature turbocharging and cylinder-direct fuel injection, developed and produced by the Volkswagen Group These TDI engines are widely used in all mainstream Volkswagen Group marques of passenger cars and light commercial vehicles produced by the company (particularly those sold in Europe). They are also used as marine engines - Volkswagen Marine, and Volkswagen Industrial Motor applications.

In many countries, TDI is a registered trademark of Volkswagen AG.

The TDI engine uses direct injection where a fuel injector sprays atomised fuel directly into the main combustion chamber of each cylinder, rather than the pre-combustion chamber prevalent in older diesels which used indirect injection. The engine also uses forced induction by way of a turbocharger to increase the amount of air which is able to enter the engine cylinders, and most TDI engines also feature an intercooler to lower the temperature (and therefore increase the density) of the 'charged', or compressed air from the turbo, thereby increasing the amount of fuel that can be injected and combusted. These, in combination, allow for greater engine efficiency, and therefore greater power outputs (from a more complete combustion process compared to indirect injection), while also decreasing emissions and providing more torque than the non-turbo and non-direct injection petrol engined counterpart from VAG.

Similar technology has been used by other automotive companies, but "TDI" specifically refers to these Volkswagen Group engines. Naturally aspirated direct-injection diesel engines (those without a turbocharger) made by Volkswagen Group use the Suction Diesel Injection (SDI) label.

Because these engines are relatively low displacement and quite compact they have a low surface area. The resulting reduced surface area of the direct injection diesel engine reduces heat losses, and thereby increases engine efficiency, at the expense of slightly increased combustion noise. A direct injection engine is also easier to start when cold, due to more efficient placing and usage of glowplugs.

Direct injection turbodiesel engines are frequent winners of various prizes in the International Engine of the Year Awards. In 1999 in particular, six out of twelve categories were won by direct injection engines: three were Volkswagen, two were BMW, and one Audi. Notably that year, the Volkswagen Group 1.2 TDI 3L beat the Toyota Prius to win "Best Fuel Economy" in its class. The TDI engine has won "Green Car of the Year award" in the years 2009 (Volkswagen Jetta TDI clean diesel) and 2010 (Audi A3 TDI clean diesel) beating other various electric cars.

The first passenger car to be powered by direct injection was the 1986 Fiat Croma 2.0 TD i.d. (Turbo Diesel iniezione diretta pump was developed by Bosch in accordance to the Fiat's engineers specifications). The first Volkswagen Group TDI engine was the Audi-developed 2.5 litre R5 TDI – an inline five-cylinder engine (R5), introduced in the Audi 100 in 1989– and this variant is still used today in Volkswagen Marine applications. The TDI arrangement has been enhanced through various stages of development – by improving the efficiency of the turbocharger, increasing the pressure at which fuel can be injected, and more precisely timing when the injection of fuel takes place. There have been a few major 'generations', starting with what are known as "VE", and "VP" (German: VerteilerPumpe) engineswhich use a distributor-type injection pump. In 2000, the Pumpe Düse (PD, variously translated "pump nozzle", "unit injector", "pump injector") TDI enginebegan to appear in Europe, eventually coming to North America a few years later.

The Pumpe Düse design was a reaction to the development of high-pressure common rail fuel injection systems by competitors - an attempt by Volkswagen Group to create an in-house technology of comparable performance that would not require any royalties to be paid. While Pumpe Düse engines had a significantly higher injection pressure than older engines, they are slightly less refined when compared to the very latest common rail and, with the original solenoid-operated unit injectors, weren't able to control injection timing as precisely (a major factor in improving emissions) Some current PD TDI engines now use piezoelectric unit injectors, allowing far greater control of injection timing and fuel delivery. From the 2009 model year onwards, TDI engines using the common rail (CR) technique, again with piezoelectric injectors, are now used in various Volkswagen Group models. The CR engines are available in many sizes, including 1.2, 1.6, 2.0, 2.7, 3.0, 4.2 and 6.0 litres, with outputs from 55 to 370 kW (75 to 500 PS) from these engines

A motor racing version of the common rail TDI engine made an impact in March 2006 when it was used in the Le Mans Prototype (LMP) Audi R10 TDI, and made its debut win in the 12 Hours of Sebring race.This victory was followed three months later by another one in the 24 Hours of Le Mans race, becoming the first diesel-powered car to win these endurance races.Fuel economy was a significant factor, as the car did not have to refuel as often as petrol engined race cars in the raceThe car was fueled with a special synthetic V-Power diesel from Shell. The Audi R10, R15 and R18 TDIs have won at Le Mans 5 times in 6 years, from 2006 to 2011, with only the 2009 race being won by Peugeot's 908 HDi FAP, which is also a diesel powered car.

In 2008, SEAT – with the León Mk2 TDI at Donington Park in England - became the first manufacturer to win a round of the British Touring Car Championship (BTCC) in a diesel-powered car. Jason Plato won race 1 of the weekend and Darren Turner won race 3.

The fuels recommended for TDI engines includes diesel fuel (also known as petrodiesel), or B5, B20, or B99 biodiesel.

A 2007 Volkswagen Jetta Mk5 with a 1.9 TDI engine and a five-speed manual transmission achieves 5.2 litres per 100 kilometres (54 mpg-imp; 45 mpg-US) on the European combined-cycle test (an US EPA test of the same vehicle would achieve around 34 MPG), while a six-speed direct-shift gearbox (DSG) automatic version reaches 5.9 litres per 100 kilometres (48 mpg-imp; 40 mpg-US).

Newer TDI engines, with higher injection pressures, are less forgiving about poor-quality fuel than their 1980s ancestors. Volkswagen Group's warranty does not cover damage due to bad fuel (diesel or bio), and has in the past recommended that only mixtures up to 5% biodiesel (B5) be used. Volkswagen Group has recently permitted mixes up to B20, and has recommended B5 be used in place of 100% petroleum-based diesel because of biodiesel's improved lubricating properties 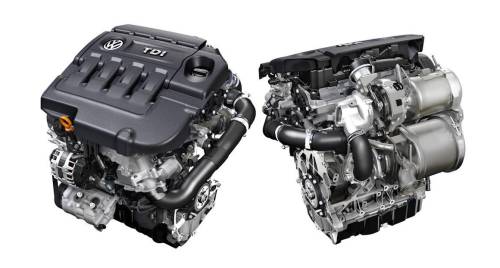