Automotive manufacturer Berlin-Mariendorf Germany from 1921 to 1931 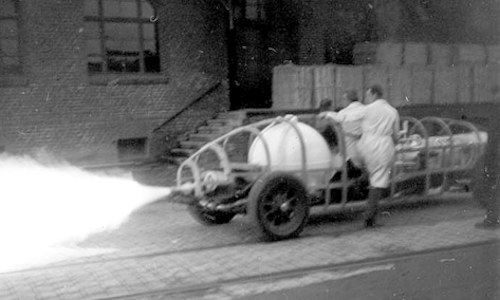 The Heylandt Society for Apparatus mbH was a German manufacturer of oxygen generation systems and vessels for liquid gases. After the First World War , the company also temporarily produced electrically powered trucks.

Company founder and namesake was Paul Heylandt,inspired by the experiments of Carl Linde , while working as a mechanic with the liquefaction of oxygen .After two short-lived start-ups in Hanover and Hamburg Paul Heylandt took over in 1919 the company for apparatus engineering AR Ahrendt & Co mbH, in which he was previously involved as a partner and their seat on Burggrafenstraße in Berlin- Mariendorf . Heylandt Gesellschaft für Apparatebau supplied liquid oxygen and produced equipment for the production of nitrogen and oxygen .

Around 1921, Heylandt built electrically powered five-ton lorries. In the 1920s, Heylandt became a leader in tank construction for liquid gases and produced systems for liquefying oxygen under high pressure. In 1929, the expanding company moved its business to Berlin-Britz , Gradestraße 91-107, where previously the opto-mechanical institution CF Voth & Co. had its headquarters. With the participation of Heylandt, the public limited company for industrial gas utilization was founded here around 1931 as a group company.

At the beginning of 1930, the rocket scientist Max Valier was given the opportunity to develop a liquid rocket engine at Heylandt in Britz. He was assisted by the Heylandt development engineers Alfons Pietsch , Walter Riedel and Arthur Rudolph , who built the rocket motor in a test vehicle called "hellhound" after Valier's accidental death and thus successfully carried out test rides at the Tempelhofer Feld in early May 1931 .

In October 1931, Heylandt began a collaboration with the army testing station, at the beginning of 1932 a liquid rocket engine was created, which was used there until about 1937 for testing purposes.