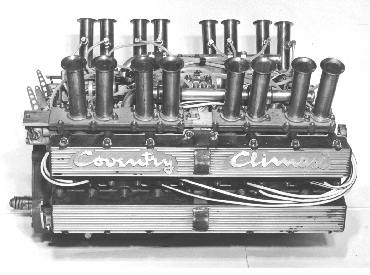 The FW was designed in response to the British Government's Defence Ministry (MoD) requisition outline issued in 1950, specifying a water pump and gasoline engine combination to deliver 350 Gallons of water per minute at 100 psi, with 35 to 40 bhp at the weight of 350 pounds or less. The successful bid by a portable pump driven by the 38 bhp FW mounted in a steel pipe frame resulted in a 5000 unit supply contract in 1952.

By 1956, 1460 cc FWB was adapted back to a higher output fire pump engine as FWBP with good results, and led to the realisation that the newer 35 hp general purpose engine specification by the government (including for Search Lights and Generator Sets) could be met with a smaller displacement engine. This resulted in the development of SOHC 654 cc (2.35" bore x 2.25" stroke) FWM in 1957, which basically was a smaller and lighter version of FWP with many detail differences that reflect the improvements and cost-cutting as well as weight saving measures found in the development of FWA, FWB and FWE. The differences include:

It is common to refer to FWM as "Feather Weight Marine", however, three facts need to be considered with regard to this naming. First, a number of American made small cars called 'Crosmobile' were imported to England in the 1940s and 1950s with uniquely light and compact 44ci SOHC 4 cylinder engines cosmetically similar to the FW series. This brand of cars were made and sold as 'Crosley' in the US, with its engines designed, patented (US Patent Number 2341488 in 1944) and licensed by Lloyd M. Taylor of California. This Crosley engine was successfully developed into various marine configurations, and became known as Peek Wildcat and Beaver inboards, as well as Homelite 55 outboard until 1966 and Fisher-Pierce Bearcat 55 outboard engine thereafter . This engine with cast iron block 5 main bearing format was developed to become the DOHC Bandini 750 (63.5 x 59.0mm) in Italy, which has no relation to the 3 main bearing aluminium block FW or FWM.

Secondly, the aforementioned Fisher-Pierce imported 1460 cc FWB to make into Bearcat 85 outboard.  As the boat maker had its own 55 hp engine, this contract was not on FWM, and this is an event after the 1966 purchase of Homelite business by Fisher-Pierce, which is long after the creation and naming of FWM.

Lastly, one of the first contracts given to Coventry Climax on FWM was for Defence Medical Supply Centre as an electric generator unit . These three facts may indicate that the 'M' in the type name was not for 'Marine' as widely believed, but was for 'Medical', despite some seemingly reliable sources claiming FWM was successful as a marine engine.

FWM was then developed into automotive engine as FWMA of 742 cc with larger 2.45" bore and 2.4" stroke in 1959. Several versions of FWMD Diesel utility engines (including a marine version, again, much later than the birth of FWM) followed, and then a chain-driven DOHC 2 valves per cylinder crossflow cylinder head was developed and became the FWMC, succeeding FWC as the all-out racing engine for the 750cc class. FWMC became known for the unusually loud and high-pitched exhaust note when installed in a specially made super-light version of Lotus Elite ran by UDT Laystall at 1961 Le Mans 24 Hours. It was this 4 cylinder DOHC FWMC that was used as the basis to develop the successful FWMV V8.

However, coinciding with the promotion of Peter Windsor Smith as the Chief Engineer (reporting to Walter Hassan) in 1960, Coventry Climax reverted (as in OC and JM engines) to using Metric system for specifying piston and crankshaft sizes, so FWMV was born with 63mm (2.4803") bore and 60mm (2.3622") stroke, ending up having almost no parts interchangeability to FWMC despite having an extremely similar design .

To streamline the production, the 63mm x 60mm sizes were later applied back to the 4 cylinder engine to form the 748cc FWMB with the same cylinder head as the FWMA.

The 1.5-litre FWMV V8, developed from FWMC using a crossplane crankshaft, was designed in 1960 and ran for the first time in May 1961. It produced 174 bhp (130 kW) from 11.5:1 compression ratio and made its debut on Cooper T58 at 1961 German GP in August. Initial developments resulted in 181 bhp (135 kW) at 8500rpm soon after, but Jack Brabham at Cooper and Stirling Moss at Rob Walker Racing Team suffered over-heating problems while enjoying a great amount of power for the rest of the season.

The problem was diagnosed to originate in the thermal expansion rate of the cylinder sleeve causing the Cooper Ring in between the block and the head to leak. With this problem solved in the Mk.II 186 bhp version, having a larger 1.35" intake valves (1.30" previously), FWMV started to score GP victories, ending the 1962 season with 3 wins for Lotus, 1 win for Cooper, 5 second places and 4 third places, in addition to 7 pole positions and 6 fastest laps.

For 1963, Coventry Climax was able to convince Lucas to supply the cogged belt driven fuel injection system originally developed for BRM with then-unique sliding throttle plates with four round intake bores cut out. With the larger bore (from 63mm to 68mm) and shorter stroke (60mm to 51.5mm) compared to Mk.II, notable changes include the increase in conrod length (from 4.2" to 5.1" center to center, with a shorter piston crown height) and the switch from crossplane to flatplane crankshaft, which surprisingly did not increase vibration in the higher RPM range because the longer conrod length counteracted the increase in secondary vibration inherent in flatplane design.

The flatplane crank was adopted partly due to Rob Walker's proposed successor to the 4WD Ferguson P99 Formula 1 having a front engine layout, which could not accommodate exhaust pipes that merge with pipes from exhaust ports on the opposing banks on crossplane arrangement, but this project did not materialise. Later, such elaborate crossplane exhaust system became known as "bundle of snakes" on Ford GT40, but was a feature of FWMV Mk.I and Mk.II.

Except for these two one-off 4 valve engines with characteristic ribbed cam covers, all the FWMVs used in 1965 season were 2 valve Mk.5 or earlier versions with various levels of upgrade. This was because Coventry Climax had started the FWMW flat-16 project, which was finally announced at the beginning of 1965, and had more than a handful in things needed to be developed or solved, so the 4 valve configuration on FWMV did not get completely developed nor did reach a series production. However, Jim Clark was able to win 6 championship races (3 with Mk.6), 6 pole positions and 6 fastest laps to become the 1965 World Champion.

At the end of the 1965 season, the failure of FWMW project left Coventry Climax with no 3 Litre successor to FWMW for the next season, so a 2 Litre version of FWMV was assembled using Mk.4 bore (72.40mm) and Mk.II stroke (60.00mm) and was used by Lotus (also used by Joakim Bonnier on a Brabham chassis) in 1966 with no success.

By the middle of 1962 season, Peter Windsor Smith and Walter Hassan were convinced that the only viable route to higher specific power was through higher revs, and the decision was made on developing a 1.5-Litre flat-16 designated the FWMW, partly in light of Harry Mundy's experiences on the screaming 1.5-Litre supercharged British Racing Motors V16 (BRM V16) in the past. Design work started in 1963, and a prototype was running on the bench in late 1964 with two flatplane flat-8 cranks (not a boxer arrangement, but rather like a 180 degree V8 with shared crank pins) shrunk-fit to the central spur gear at 90 degrees phase shift to each other.

Work on this project continued through the later years of the 1.5 L formula with Lotus and Brabham the likely recipients. The packaging was successful in making the engine fairly compact at 30.9" long (only 1" longer than FWMV Mk.4) and 22.6" wide, but there were a number of design issues still to solve before the formula ran out. The engine had not only shown no power advantage over the V8 despite its much higher rev limit, it had a number of design issues that would either have taken a major rework to solve or at least resulted in the need for complete engine rebuilds after 3 hours of running.

The largest problem was torsional vibration on the crankshaft from the outset, at one time necessitating a ban on using below 4000rpm on the bench, that often caused the conjoined cranks to shear itself off the central spur gear resulting in the engine becoming two aphasic flat-8s, or the parallel quill shaft (driven at 0.8 times the crank speed, located below crank, which in turn drives the flywheel and ancillaries) overheated by the vibration and disintegrated.

This unique central power-take-off system using the parallel shaft was meant to lessen the anticipated torsional vibration of the long crankshaft, however, the self-destructing vibration appeared no matter what they changed in firing order, crank counter-weight configuration or crankshaft weight distribution.

As a result, Coventry Climax could not derive revenues from the project, and was further forced to develop a 2-Litre version of FWMV so that Lotus, who built one Lotus 33 chassis specifically for FWMW, who also were counting on using FWMW's anticipated 3-Litre successor, could avoid missing the first races of the 1966 season. Not the old 4 cylinder FPF nor the 8 cylinder FWMV could be enlarged to 3 Litres, and the 11 years old 2.5-Litre FPE parts had been sold off in the entirety and were in the hands of Paul Emery, who was in the process of enlarging FPE to 3-Litres as described in the above FPE section.

Partly because of this project's grand scale failure, and partly because of Jaguar's take over in 1963, Coventry Climax could not develop a 3-Litre successor to FWMW, and announced the withdrawal from F1 engine business, with its reputation and the long standing relationship with Lotus seriously tarnished.

The F1 engines were as follows (bore and stroke figures are unified in inches on Metric designs for comparison):