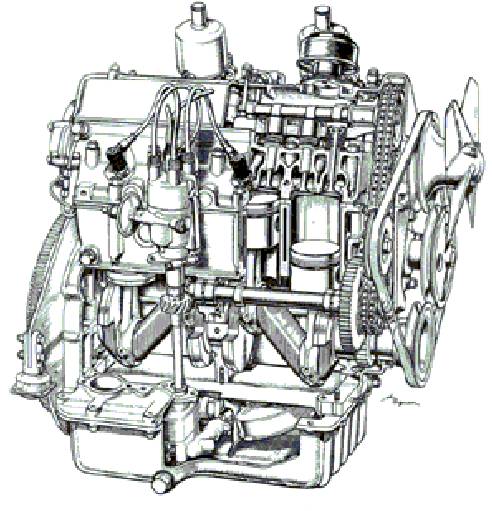 Within the complicated corporate lineage, the reputation of Coventry Climax as the top-rate engine designer/builder is largely credited to Walter Hassan and Harry Mundy, who designed and developed the Feather Weight (FW) together. The following design aspects are credited to these two people, except the last two items, in which Peter Windsor Smith played a considerable role in place of Harry Mundy who left the firm in 1955 and returned in 1963.

The FW 38 hp 1020 cc straight-4 SOHC was designed by Walter Hassan and Harry Mundy as the motive unit for a portable service firepump which was supplied to the government under three contracts totaling over 150,000 units. This engine was revolutionary in its lightness, with the bare weight of 180 pounds, combined with the maintenance-free valve adjustment using shims under overhead camshaft.

In 1953 it was adapted for automotive racing as the 1098 cc FWA retaining the cast crank 3 main bearing construction of FW but with distributor ignition in place of magneto, different camshaft and a higher 9.8:1 compression ratio. With a bore of 2.85 inches and a stroke of 2.625 inches it initially produced 71 hp (53 kW) and was first used at Le Mans in 1954 by Kieft Cars. After the FWA was introduced, FW was renamed to FWP (Pump).

The larger bore (3 inches) and longer stroke (3.15 inches) 1460 cc FWB engine followed, it retained the FWA head but had a forged steel crank and produced a nominal 108 bhp (81 kW). The most significant of the series was the FWE which used the FWB bore size and the FWA stroke for a displacement of 1216 cc. In exchange for a 1000 unit purchase agreement signed by Colin Chapman, it was specifically designed with forged steel crank for Lotus Elite but became a firm favourite with a number of sports car racing firms for its racing durability and high power-to-weight ratio.

Other FW variants included a short-stroke (1.78 inches) steel crank version of the FWA named the 744 cc FWC, as used by Dan Gurney early in his career in US club racing. The objective of this engine was for Lotus to campaign for the 750 cc Le Mans Index of Performance prize in 1957, three engines were made for this purpose and they successfully won the prize. Lotus also campaigned FWC at Le Mans in 1958.

In 1966-67, Fisher-Pierce of America imported an 85 hp version of FWB with twin-carburetors to be mounted vertically in their outboard marine unit. This boat engine came out to the market as Bearcat 85.