The company was started in 1903 as Lee Stroyer, but two years later, following the departure of Stroyer, it was relocated to Paynes Lane, Coventry, and renamed to Coventry-Simplex by H. Pelham Lee, a former Daimler employee, who saw a need for competition in the nascent piston engine market.

Hundreds of Coventry-Simplex engines were manufactured during World War I to be used in generating sets for searchlights. In 1917 the company was renamed to Coventry Climax and moved to East Street, Coventry. 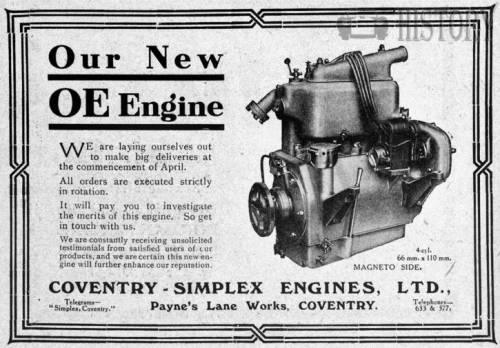 Throughout the 1920s and 1930s they supplied engines to many companies manufacturing light-cars such as Abbey, AJS, Albatross, Ashton-Evans, Bayliss-Thomas, Clyno, Crossley, Crouch, GWK, Marendaz, Morgan, Triumph, Swift, and Standard. In the 1920s the company moved to Friars Road, Coventry and in the late 1930s they also acquired the ex-Riley premises in Widdrington Road, Coventry. In the early 1930s the company also supplied engines for buses.

With the closure of Swift in 1931, the company was left with a stock of engines that were converted to drive electric generators, giving the company an entry into a new field. The economic problems of the 1930s hit the business hard and Leonard Pelham Lee, who had taken over from his father, diversified into the production of water-pumping equipment and the "Godiva" was born.

Going into the war, Coventry Climax used their marine diesel experience to further develop and build the Armstrong Whitworth supercharged H30 multifuel engine for military use. This has been fitted as an auxiliary engine in the British Chieftain and Challenger battle tanks and Rapier anti aircraft missile systems.

In the late 1940s, the company shifted away from automobile engines and into other markets, including marine diesels, fire pumps, and forklift trucks. In 1946, the ET199 was announced, which the company claimed was the first British-produced forklift truck. The ET199 was designed to carry a 4,000 lb (1,800 kg) load with a 24-inch (610 mm) load centre, and with a 9 ft (2.7 m) lift height.

In 1950, Harry Mundy (previously of Alvis, ERA, Morris and BRM) and Walter Hassan (previously employed by Bentley, ERA and Jaguar) joined Coventry Climax, and a new lightweight all-aluminium overhead camshaft engine was developed in response to the government's ambitious requisition outline asking for a portable fire pump that is capable of pumping double the amount of water specified in the previous outline, with half the weight.

This was designated the FW, for "Feather Weight". The engine was displayed at the Motor Show in London and attracted attention from the motor racing fraternity for its very high "Horsepower per Pound of weight". With strong persuasions at the Show including those by Cyril Kieft (who had Stirling Moss as a F3 driver) and a young Colin Chapman, Lee concluded that success in competition could lead to more customers for the company and so the team designed the FWA, a Feather Weight engine for 'A'utomobiles.

The first Coventry Climax racing engine appeared at the 1954 24 Hours of Le Mans in the front of one of two Kieft 1100 sports racers, but both cars (one with a MG engine) failed to finish the race for problems unrelated to engine. The FWA became popular in sportscar racing and was followed by Mark II and then by the FWB which had a capacity of nearly 1.5-litres. The new Formula Two regulations suited the 1.5-litre engine and it quickly became the engine to have in F2 racing. The following year, the first Climax engines began to appear in Formula One in the back of Cooper chassis.

Initially, these were FWBs but the FPF engine followed. Stirling Moss scored the company's first Formula One victory in Argentina in 1958, using a 2-litre version of the engine. In general terms, however, the engines were not powerful enough to compete with the 2.5-litre machinery and it was not until the 2.5-litre version of the FPF arrived in 1959 that Jack Brabham was able to win the World Championship in a Cooper-Climax. At the same time, the company produced the FWE engine for Lotus Elite and this enjoyed considerable success in sports car racing, with a series of class wins at the Le Mans event in the early 1960s.

In 1961, there was a new 1.5-litre formula and the FPF engine was given a new lease of life, although the company began work on a V8 engine, designated the FWMV, and this began winning races in 1962 with Jim Clark. There would be a total of 22 Grand Prix victories before 1966 with crossplane, flatplane, 2 valve and 4 valve versions of FWMV. When the new 3-litre formula was introduced, Coventry Climax decided not to build engines for the new formula, withdrew from racing after the disastrous FWMW project, with the exception of the new 2-Litre version of FWMV.

Also in the early 1960s, Coventry Climax was approached by Rootes to mass-produce FWMA for use in a compact family car project called Apex with all aluminium alloy over head cam engine combined with full-syncromesh aluminium transaxle. This combination was considered very radical at the time, especially the syncromesh on all forward gears had been declared 'impossible' by Alec Issigonis of the BMC Mini fame. The adoption to mass-production was successful, and the project came out to the market as 875cc Hillman Imp totaling over 400,000 units made by 1976 including the later 998cc version.

The company was purchased by Jaguar Cars in 1963, which itself merged with the British Motor Corporation (BMC) in 1966 to form British Motor Holdings (BMH).

In May, 1964, the Royal Automobile Club presented the Dewar Trophy, which is given at the recommendation of RAC's Technical and Engineering Committee for the most outstanding British achievement in the automotive field, to Leonard Pelham Lee. The citation reads: "Awarded to Coventry Climax Engines Ltd. for the design, development and production of engines which have brought British cars to the forefront in the field of Grand Prix racing."

History of this trophy dates back to 1906. The last time Dewar Trophy was awarded before 1964, the recipient was Alec Issigonis for BMC in 1959 on the design and production of ADO15 Mini, who once was a Junior Engineer at Coventry Climax.

In the early 1970s the fire pump business was sold back into private ownership, and the Godiva Fire Pumps company was formed in Warwick. In 1977 Coventry Climax acquired the Warrington forklift truck business of Rubery Owen Conveyancer, renaming it to Climax Conveyancer.

1982 saw the sell-off by BL of the Coventry Climax forklift truck business back into private ownership, to Coventry Climax Holdings Limited. Sir Emmanuel Kaye, also chairman and a major shareholder of Lansing Bagnall at the time, formed the company, independent of his other interests for the purpose of acquiring Coventry Climax.

In 1986 Coventry Climax went into receivership and was acquired by Cronin Tubular. In 1990, a further change of ownership came with the engine business being sold to Horstman Defence Systems of Bath, Somerset, thus breaking the link with Coventry. Kalmar Industries acquired the forklift truck interests of Coventry Climax in 1985. The company traded as "Kalmar Climax" for a few years, but is now trading as Kalmar Industries Ltd. 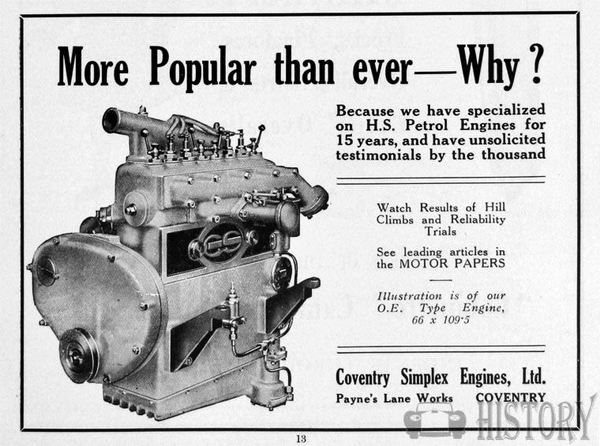