The V10 TDI engine is a 10-cylinder, water-cooled and supercharged 90 ° V engine with an aluminum engine block. The bearing bridge is cast in cast iron. In order to absorb the forces that occur, the block and the bearing bridge are crossed by tie rods made of steel. The liners use a plasma coating. The forged and cracked connecting rods are connected to the pistons via a trapezoidal connecting rod eye and a trapezoidal and brass-reinforced piston pin boss. The cylinder head uses the cross-flow principle. The fuel injection takes place by means of a pump-nozzle system and two-valve technology. Both the ancillaries and the two overhead camshafts are driven by spur gears. To reduce vibration, the engine has a balance shaft, which also serves as the drive shaft for the oil pump. To dampen vibrations, a vibration damper is additionally fitted, which is filled with silicone oil. The camshaft is forged and has bolted counterweights made of tungsten. The Hubzapfenversatz is 18 ° and is required due to the four-stroke principle. The spur gear drive has 15 helical gears whose gear angle is 15 °. To compensate for temperature-related play in the gear drive, there are bracket joints with differential gears, which automatically adjust their position to the engine temperature. As with the 2.5-liter engine, the power steering pump and air conditioning compressor are combined and driven by the wheel drive. The oil filter module is placed in the V-space of the engine. In it are oil filter housing, oil filler neck and the oil cooler. The oil sump, built from two cast aluminum parts, is mounted below the engine and contains the oil pump on the engine end in the oil sump. She works according to the duocentric principle. Each cylinder bank of the engine has its own Bosch EDC 16 control unit. The exhaust manifolds pass the exhaust gas through two VTG turbochargers, with each cylinder bank having its own loader. 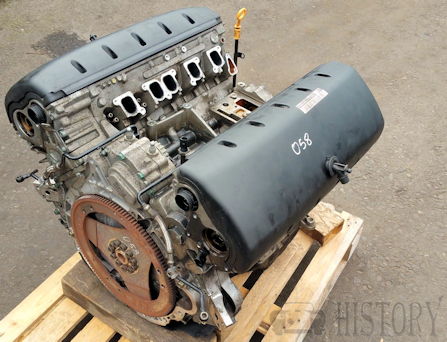