The drop-forged steel, six-throw crankshaft runs in seven main bearings; as opposite of wider angle V6 engines which have only four main bearings. The connecting rod bearing journals are offset 22° to one another. Two overhead camshafts (OHCs) operate the automatic hydraulic valve lifters which, in turn, open and close the 39.0 millimetres (1.54 in) intake valves and 34.3 millimetres (1.35 in) exhaust valves. Since the two 'rows' of pistons and cylinders share a single cylinder head and head gasket, the piston crown (or top surface) is tilted. Intake and exhaust valves need different camshafts to vary valve overlap (they may be coaxial like in some 90° V8).

Because of the cylinder arrangement in the VR6 - with two rows of combustion chambers within the same cylinder head, the intake and exhaust ports between the two rows of cylinders are of varying lengths. Without compensation, these varying port lengths would result in the two rows of cylinders producing different amounts of power at a particular engine RPM. Depending on the specific generation of VR6, the difference in port lengths are compensated for by specific tuning of the intake manifold, the camshaft overlap and lift profile, or a combination thereof.

The fuel injectors, operated by the Bosch Motronic engine control unit (ECU) system, are mounted behind the bend of the intake manifolds. VR6 engines also use an additional auxiliary electric pump to circulate the engine coolant whilst the engine is running, and also during the cooling fan 'after-run' cycle, in addition to the belt-driven main water pump.

The centerline of the cylinders are also offset from the centerline of the crankshaft by 12.5 millimetres (0.49 in). To accommodate the offset cylinder placement and narrow "Vee" design, the connecting rod bearing journals are offset 22° to each other. This also allows the use of a 120° firing interval between cylinders. The firing order is: 1, 5, 3, 6, 2, 4.

The Volkswagen Group VR6 engine was introduced in Europe by Volkswagen in 1991, in the Passat and Corrado; and in North America the following year. The Passat, Passat Variant (estate/wagon), and U.S.-specification Corrado used the original 2.8 litre design; the European-specification Corrado and the 4WD Passat Syncro received a 2.9-litre version with 140 kilowatts (190 PS; 188 bhp). This version also had a free flowing 6 centimetres (2.4 in) (2.5 in) catalytic converter, sharper camshafts, 4-bar (58 psi) fuel pressure regulator, enlarged inlet manifold, and larger throttle body.It was also sold to Mercedes Benz for use in their vans, and designated as M104.900.

The 2.9-litre engine, as destined for the Corrado, was originally designed to benefit from a dual-tract variable-length inlet manifold - called the VSR, and made by Pierburg for Volkswagen Motorsport. This gave extra low-down torque, but was deleted before production on cost grounds, and was instead offered as an aftermarket option. This design was later sold to Schrick, who redesigned it and offered it as the Schrick VGI ("Variable Geometry Intake").

In 1992, with the introduction of the Volkswagen Golf Mk3, a six-cylinder engine was available for the first time in a lower-midsize segment hatchback in Europe. North America waited until 1994 to receive this engine; at the same time, the European model started to use the 2.9-litre in the VR6 Syncro model. The corresponding Vento/Jetta VR6 versions appeared in the same years.

Further modifications were added to the design in 1999, with the introduction of the 24-valve 2.8-litre VR6. This engine produced 150 kilowatts (204 PS; 201 bhp), and 265 newton metres (195 lbf·ft) of torque. The new version was not available in the Passat (as it was incompatible with the then-current generation's longitudinal engine layout), but was introduced as the range-topper in the Golf and Bora for European markets under engine codes AQP and AUE from 1999. The VR6 name was dropped as a commercial designation, and the 4WD system (now renamed 4motion) became standard on the V6 (VR6) in Europe. The corresponding multi-valve V5 was only released in 2001, with a 20 PS power increase, to 125 kilowatts (170 PS; 168 bhp). The multi-valve V6 (VR6) was introduced in North America in 2001 aboard the T4 Eurovan, producing 150 kilowatts (204 PS; 201 bhp), and in the GTI in 2002 (where it retained the VR6 name).

In 1999, an updated 12-valve VR6 model was released for the North American market A4-platform Golf Mk4/GTI/Jetta product line. This new VR6 improved performance via updated camshafts, variable geometry intake manifold, an increased compression ratio of 10.5:1, and updated emissions equipment. Power increased to 130 kilowatts (177 PS; 174 bhp) at 5,800 rpm, while torque increased to 245 newton metres (181 lbf·ft) at 3,200 rpm. This engine option was available from 1999.5—2002, when it was replaced by the revised 24-valve engine, engine code BDE, at the same time as the European market also introduced this revised engine.

The then range-topping 3.2-litre VR6 was later used in the current Audi A3 and the Mk5 Golf R32.

In 2005, the European market version of Volkswagen's sixth generation Passat, now with a transverse engine layout, went on sale with a revised version of the 3.2-litre VR6 as its top-spec engine. For North America, the Passat received a new 3.6-litre VR6 with a narrower 10.6 degree cylinder angle, producing 206 kilowatts (280 PS; 276 bhp). These revised 3.2 and 3.6 feature Fuel Stratified Injection (FSI). This new 3.2 FSI VR6 develops 184 kilowatts (250 PS; 247 bhp) at 6,250 rpm, and 330 newton metres (243 lbf·ft)at 3,000 rpm. The introduction of the Passat VR6 also marked the first time a VR6 powered vehicle was made available in North America before Europe.

The first generation Porsche Cayenne base model is powered by a 3.2-liter VR6 engine producing 250 hp (190 kW); modifications in the exhaust manifold allow power to peak at 6700 rpm. This is the same 3.2-liter motor found on a Volkswagen Touareg and Volkswagen R32. 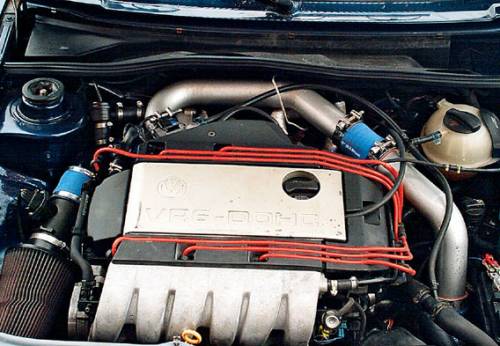