The first generation (1997–2000) began as the wagon version of the Volvo S70 (a renamed Volvo 850, which was itself available in sedan and station wagon configurations). The V70 was available only as a front and all-wheel drive station wagon, the latter marketed initially as the Cross Country XC and subsequently as the XC70.

The original V70 was a development of the Volvo 850 estate car. The 850's square edges became more rounded. Other changes included a revised grille, colour-coded bumpers, clear indicator lenses, and a new dashboard. Trim level packages for the V70 included:

T5 and R models are the series high-performance models with the only real difference being the added body kit of the "R". The T5 was equipped with a sport-tuned high pressure turbocharged 2.0 a 2.3 or a 2.4  litre engine with maximum boost pressure set at 10.5 pounds per square inch (72 kPa), and 'turbine' alloy wheels, whereas the LT models had a low pressure turbocharged 2.4 litre engine with maximum boost pressure at 6 to 7 pounds per square inch (41 to 48 kPa). The R was fitted with a full factory fitted body kit (chin spoiler and rear spoiler, anthracite alloy wheels) a range of unique colors.

Phase 3: were produced from May 1999 till June 2000 (UK T to W reg). They were only available with the larger B5244T2 (2435cc) engine (19T turbo 265 bhp/400 N·m) and five-speed adaptive automatic gearbox. These also use the Bosch Motronic ME7 engine management system, drive-by-wire and VVT. These cars were fitted with twin tail pipes (first time Volvo fitted twin exhaust system), WHIPS system, and larger side SIPS airbags for head protection, and larger vented rear brake discs. (0–62 6.3 155 mph). 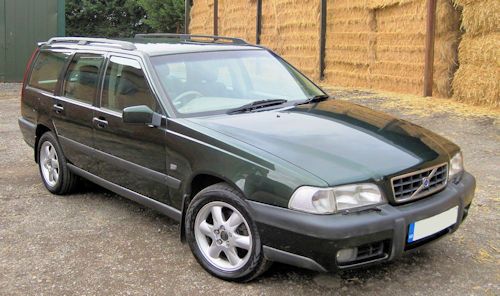 Latest generation of Road Traffic Information Satellite Navigation used on the Phase III's, this is the same CD based system used by Volvo up until 2003 and on the C70 until 2005.

Roof rails were changed now the same as V70XC.

Trim and specification levels remained virtually unchanged throughout the 3 phases. Trim was Leather and Alcantara in either Beige or Grey/Black with aluminium trim on the dash and console (dark wood was an option on P1 and P2 cars). On P1 cars, the steering wheel was also leather/alcantara, but phase 2 and 3 had a thicker rimmed leather only wheel. Phase II and III had blue engine covers. Phase 3 cars had the option of contrasting grey/beige trim. These cars were virtually "fully loaded" with very few options available (mainly pro-logic (£600), 6 CD boot mounted changer (£600), RTI-Satellite Pop-up Navigation System (£2500)) as they cost £37,000 when new. 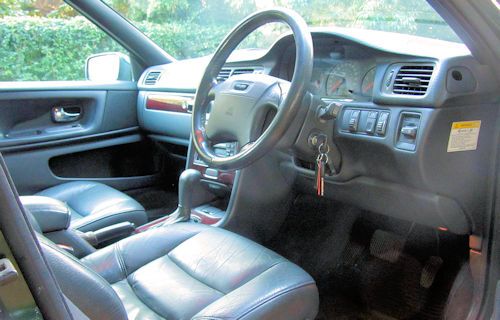 All phases were available with either 16" or 17" roadwheels in either silver or anthracite with a temporary spare wheel. The 17" wheels were £100 more expensive.

The Insurance Institute for Highway Safety (IIHS) granted the 850/S70 their highest rating of "good" for front crash protection. Rear crash protection was rated as "good". 1999 and newer, prevents whiplash by a seatback hinge mechanism that is standard equipment. There were no side impact tests conducted on behalf of the IIHS for the Volvo V70.