With styling by Peter Horbury, the second generation (1999-2007) shared major mechanical and styling commonality with the Volvo S60 sedan, and used the P2 platform with a 4 cm increase in width and height, a 5 cm longer wheelbase, a slightly shorter overall length than its predecessor, and a slightly increased interior cargo volume. As with its predecessor, the second generation was also offered with an all-wheel drive variant which was initially marketed as the V70 XC, later as the XC70.

Volvo released the redesigned V70 to most markets at the end of 1999 and for the 2000 model year in North America. Based on the then-new P2 platform, the second generation shared major mechanical and styling commonality with the Volvo S60 sedan, offered frontal area of 2.23 m2 and a coefficient of drag of .30. The new generation featured adhesively bonded construction (vs. spot-welded) in key areas, with Volvo claiming the new body to be 70 per cent more rigid than the predecessor. Critical aspects of the design for the second generation were completed before Ford acquired Volvo in 1999.

The interior featured raised seating in the second row, a hard point on the passenger’s side of the center console to provide support for a range of optional accessories (e.g., an optional shopping bag holder) rear-seat table, waste basket and cargo net integrated into the rear seat backs. Standard interior features included a coat hook integrated into the side of the front passenger's headrest, glove compartment with pen holder and toll card, configurable center console and rear seating with a two position backrests — one position favoring cargo and the other favoring comfort. 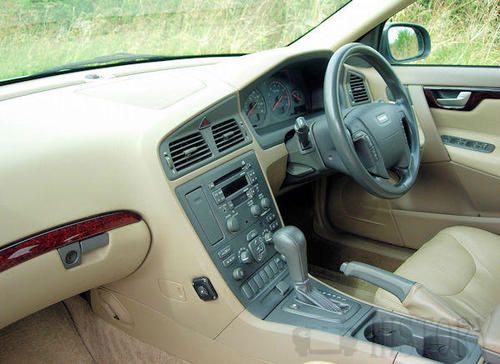 At its introduction, the second generation V70 XC received a major upgrade to its suspension a ground clearance of 8.2 in (210 mm).

All P2 platform Volvos received a minor facelift across all markets for the 2005 model year, with changes to the front fascia, tail lamps, center console, electrical system and some engines. Production of the second generation V70 ended with model year 2007.

The second generation V70 was styled by British designer Peter Horbury, who said "the design challenge involved marrying sports car style at the front with the necessary limitations of a wagon back."  More specifically, he described the concept as the "front end of a Jaguar E-Type married to the back end of a Ford Transit v 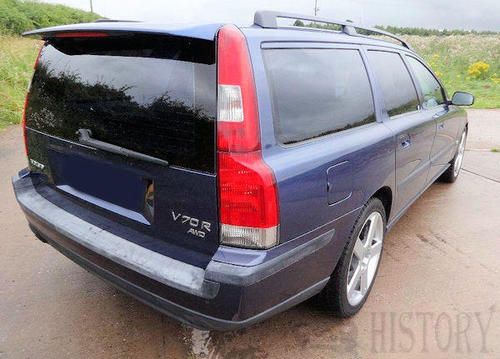 As with the previous generation, Volvo offered a high performance, all-wheel drive variant, the V70R, using a 2.5L Turbocharged I5 engine in high performance tune produces 300 metric horsepower (221 kW; 296 hp) and 400 newton metres (295 lbf·ft) of torque. The V70R is equipped with Volvo's 4C multi-mode suspension developed in conjunction with suspension experts Öhlins—allowing the driver to vary the car's handling depending on driving style and conditions. The V70R AWD has also larger Brembo brakes to provide high performance braking capabilities in line with its high performance characteristics.

In a 2006 article titled The Manwagon, The Wall Street Journal linked the V70R to a trend "to lure speed-crazy guys with kids," saying "car makers are trying to transform the dowdy old family hauler into something new," and that "consumer research had unearthed a surprising number of family men who thought wagons could be cool, if only they had more guts."

In the US market the V70 was available in front or all-wheel drive (AWD) versions with either a Geartronic five-speed automatic transmission or a five-speed manual transmission (only offered in the US on the 2.4 and T5 versions). As before, there is an AWD-only off-road version with raised suspension, plastic body cladding and an interior grab handle. This version previously known as the V70 XC (Cross Country) through model year 2002 was later renamed to XC70 starting with the 2003 model year in keeping with Volvo's XC90.

Also following on from the previous generation was the use of five-cylinder, 20 valve inline transverse-mounted engines. The US range included a naturally aspirated 2.4 litre engine, a 2.5 low pressure turbocharged engine and a 2.3 litre (later 2.4) high-pressure turbo "T5" engine. 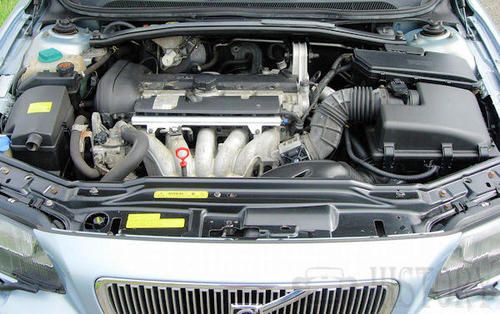 The Insurance Institute for Highway Safety (IIHS) evaluated the Volvo S60 (sedan variant). The S60 was granted the IIHS's highest rating of "good" in front and rear tests. The S60 was awarded the Institute's second highest rating of "acceptable" in the side test. However, an improvement in the driver dummy's pelvis/leg rating from "marginal" to "acceptable" would yield an overall "good" rating in the side test. 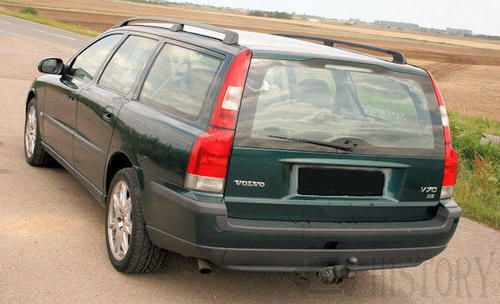