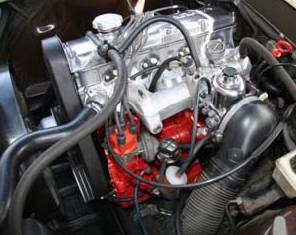 The Volvo B21 was a slant straight-4 engine first used in the Volvo 200 series, meant to replace the B20. The B21 and all derived engines are often referred to as red block engines for the red paint applied to the block. The primary differences when compared to the B20 was the switch to a SOHC in place of the older pushrod configuration, and an aluminum crossflow cylinder head versus the iron head of the B20.

Initially the overhead camshaft versions were offered as optional equipment on the 240, becoming standard in all markets by the 1976 model year. The overhead camshaft motors were available in displacements of 2.0 (B19 and B200), 2.1 (B21), and eventually 2.3 (B23 and B230) litres. The B21 featured an 80 mm (3.1 in) stroke, and 92 mm (3.6 in) bore. In the US, the B21's power output ranged anywhere between 98 hp (73 kW) and 107 hp (73 to 80 kW), based on variations in the compression ratio and was typically supplied with a B or M camshaft.
The engines are tilted approx 15 degrees to left (exhaust side) to make room for the more complicated injection systems. B19 and B21 blocks can be identified by water plugs on one side of the block. The B23 blocks have them on both sides. The camshaft is driven by a toothed belt that is driven off the front of the crankshaft. The belt turns the intermediate shaft as well, which in turn drives the oil pump, distributor (on 240 engines and BXX 700/900 series engines) and the fuel pump of carburetor models.

In 1981 the B21FT, a B21F with a turbo, was introduced with a compression ratio of 7.5:1 mated with a Garrett T3 turbocharger and a T camshaft. Additional turbo variants, not offered in the US market, were the B19ET and the B21ET, based on the B19E and B21E respectively. The turbocharger increased power output to 127 hp (91 kW) for the B21FT, and 157 hp (115 kW) for the B21ET. Also new for the 1981 model year was the B23, with a displacement of 2.3 litres (80 mm stroke and 96 mm (3.8 in) bore). Aside from the increased bore size, the engine is identical to the B21. Volvo used a slightly different mold for the turbo engines to cast a boss for the turbo oil return line. Because a turbocharged engine has a higher operating temperature they used sodium filled exhaust valves and a thermostat controlled oil cooler (air/oil model).

In 1983 the B23 was introduced to the American market. Also introduced in 1983, the "intercooler boost system" (IBS) was introduced for the B21FT motors. The IBS kit consisted of an intercooler, appropriate ducting, a new fan shroud, new oil cooler lines and mounting brackets, and optionally an automatic transmission kit. IBS raised the output of the B21FT to 162 hp (121 kW), slightly more than the non intercooled European market B21ET's 157 hp (117 kW).

Midway through the 1984 model year, the "intercooler boost system" became standard on American 240 Turbos. Additionally a bigger clutch and a stepped flywheel were included.

In 1985 a revised, "low friction" design was introduced, dubbed the B200 and B230 (depending on displacement). Several components had design changes, longer rods (152 mm c-c, 7 mm (0.3 in) longer), pistons with a lower compression height, lower friction bearings (smaller in size), a crankshaft with 8 counterweights (instead of 4 on the older Bxx engines) and a heavy harmonic balancer in the crank pulley. 1989 saw an upgrade to the crankshaft, with a relocated axial thrust bearing back to the number 5 journal, bigger main bearings, rods were enlarged to 13 mm (0.5 in) from 9 mm (0.4 in) in 1990. Also introduced in 1989 were 16 valve, twin-cam variants of the B200 and B230, dubbed the B204 and B234 respectively. The B204 was also available in turbo form in some markets (such as Italy) where large displacement motors were taxed heavily. It came in two versions: The B204GT turbo motor operates with a lead resistant lambda probe and generates approximately 200 hp (149 kW). The B204FT has a catalytic converter and generates 185 hp (138 kW). Both were the first redblocks standard equipped with oil squirters for piston cooling. Crankshaft, conrods and pistons all forged. Exhaust valves were sodium filled for cooler operation. It has smaller valves and stiffer valve springs than n/a 16V. Crank torque is 290 N·m (210 lb·ft) at 2950 rpm for the GT, and 280 N·m (210 lb·ft) for the FT. Other differences from the normal 16V redblock engine are that it uses a remote mounted oil filter (Away from block on exhaust side engine mount) and a windage tray.

The 1,986 cc 136 PS (100 kW) B19ET was sold in certain markets where engines of over 2 litre displacement were heavily taxed, such as Italy. The engine has the same stroke as all other redblocks, the smaller displacement is the result of a smaller bore (88.9 x 80.0 mm). It is a very robust engine with forged pistons  The B19 later turned into the B200 low friction engine.

The B23ET and B23FT motors were offered for two years only in the 1983 and 1984 Volvo 700 and 200 series. Both the B23ET and B23FT are somewhat unique in the 700 series as they were the only turbo motors offered in the 700 series with a block mounted distributor, forged pistons and a forged crankshaft. The B23ET was the only redblock known to be equipped with a small coolant passage version of the higher flowing 405 cylinder head, the FT had to make do with normal 398 head. As these motors predate the low-friction B200 and B230 turbos and are equipped with forged pistons and crank, they are often considered one of the most robust Volvo turbo motors.

Introduced in 1989 for the 740 GLE (and later used in the 940/960), The 16-Valve Redblock motors were offered in both a 2.0 litre Turbo (B204FT/GT) and a 2.3 litre 154 hp Naturally aspirated version (B234F). The head was designed for Volvo by Porsche. In addition to the 16 Valve head, these motors were equipped with twin counter rotating external balance shafts and the engine block itself differs from the 8V redblock. The block differed from the standard B230 in that the auxiliary shaft (used to drive the oil pump and distributor on models that had block mounted distributors) was replaced with an external oil pump. The 16-Valve head was itself a completely new design for Volvo: The head was of a multi-piece design featuring a separate cam carrier and lower section. The later "white block" motors can trace their head design back to the two-piece setup found in the B204 and B234. The 2.0 litre turbo variant was introduced for European markets with tax structures tied to engine displacement such as Italy. Unique to the B204 turbo was an exhaust gas pyrometer which was used to detect excessively high exhaust temperatures. When excessively high exhaust temperatures were detected, the fuel injection computer would richen the mixture. It has a forged crankshaft, cast pistons, and 13 mm (0.5 in) connecting rods.

Although a powerful engine for its time, the 16 Valve engine can experience some problems that can be solved easily. One of the few problems is oil pump gear problems leading to broken timing belts. The oil pump gear itself can fail around the mounting flange, or, more often, the weak 8.8(grade 5) grade bolt holding the gear can break. It is strongly recommended to use a 10.9 (grade 8) grade bolt when replacing the oil pump gear. Another cause for timing belt failure is improperly adjusting the timing belt on engines with a manual tensioner (1989 to very early 1990 models only) or improperly adjusting the balance shaft belt. Because this is an interference engine, damage will occur if the timing belt fails. Another common occurrence is that the balance shaft's oil seals are prone to leak on older engines. New replacement sealings tend to start leaking again due to 'worn in irregularities' on the shaft itself. Many people have removed the balance shaft belt or the balance shaft assemblies altogether to prevent belt failure and/or leakage. The balance shafts are only there to lessen vibration for a smooth idle, and removing them will not harm the engine. Once all the common problems are solved, the 16 Valve engines are just as reliable as their SOHC counterparts.

The recommended timing belt interval for these engines is every 50,000 miles, or earlier if the engine is modified. It is also recommended to replace the crank and camshaft seals at every interval and to thoroughly inspect the tensioner and idler pulleys for wear.

Volvo Penta sold the OHC redblocks as marine engines as well, just like the older OHV engines. Depending on the model the displacement was 2127 (as B21), 2316 cc (same as B23/B230 automotive) or 2490 cc. The engines with 2490 cc displacement, identified as the Volvo Penta AQ151 (8 valve) and AQ171 (dohc 16 valve) models, got a forged crankshaft with a longer stroke (86 mm stroke) together with pistons with a 3 mm (0.1 in) lower compression height. The 2490 cc blocks still had B230 cast in the block. Penta used both the 8 valve and 16 valve cylinder heads. Both the 8V and 16V variants used the same engine block series, the 16V versions didn't use the different block like the automotive B2x4 with balance shafts.

The B21, and related red block motors, were named using the following convention: B##X or B##VX. Where B stands for "bensin" (gasoline), ## stands for the displacement in decilitres, and X is an appropriate suffix. On the later low-friction motors, V denotes SOHC configuration (0) or DOHC configuration (4, for 4 valves per cylinder).

The following suffixes were commonly used by Volvo: