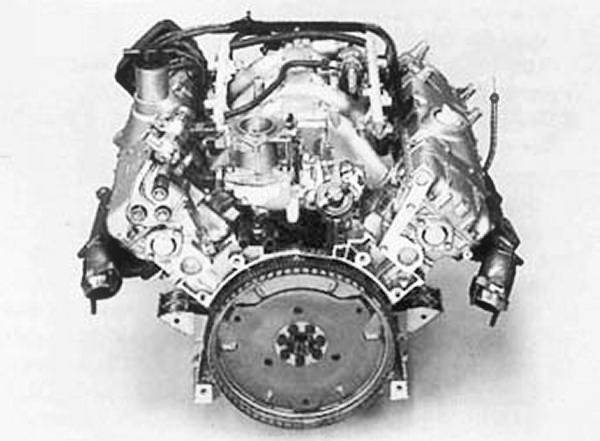 The PRV engine is an automobile petrol V6 engine that was developed jointly by Peugeot, Renault and Volvo Cars – and sold from 1974 to 1998. It was gradually replaced after 1994 by another joint PSA-Renault design, known as the ES engine at PSA and the L engine at Renault. It is designed and manufactured by the company "Française de Mécanique" for PSA, Renault and Volvo.

In 1966, Peugeot and Renault entered a cooperative agreement to manufacture common components. The first joint subsidiary, La Française de Mécanique (also called Compagnie Française de Mécanique or simply FM) was launched in 1969. The FM factory was built in Douvrin near Lens in northern France. The PRV engines are sometimes referred to as "Douvrin" engines, though that name is more commonly applied to a family of straight-4s produced at the same time.

In 1971, Volvo joined Peugeot and Renault in the creation of the PRV company, a public limited company (plc) in which each of the three manufacturers owned an equal portion. The company originally planned to build V8 engines, although these were later scrapped in favor of a smaller and more fuel-efficient V6.

The PRV engine could be seen as a V8 with two missing cylinders, having a 90 degree angle between cylinder banks, rather than the customary 60, but with crankpins being 120 degrees apart. The Maserati V6 of the Citroën SM followed a remarkably similar pattern of development.

The 1973 energy crisis, and taxes levied against engine displacement greater than 2.8 litres made large V8 engines somewhat undesirable, and expanded the market for smaller displacement engines.

Additionally, Renault needed a V6 engine to fit in its new model, the Renault 30. Renault's internal designation for the PRV was Z-Type.

Machinery for assembling the engines arrived at Douvrin in early June 1973, and buildings for producing the engines were finished in January 1974. The first PRV engines were officially introduced on 3 October 1974 in the Volvo 264. Adoption was swift, and the PRV V6 had been sold in at least five different models by the end of 1975.

While Renault were working forced induction into the PRV, Peugeot and Citroen developed their own 24 valve engines as an option in the 605 and XM respectively. The compression remained the same as the Renault 12v, but the pistons differed, as did some of the timing gear, and the heads were re-engineered to allow easier maintenance (the camshaft being fitted from the opposite end for example). This engine was however extremely expensive, and suffered cam wear problems. This was due to the exhaust valves sharing a single lobe, while each inlet valve had its own lobe. This was at least partially solved by the use of ceramic followers as one of a succession of recalls.

Meanwhile, French supercar manufacturer Venturi had been developing their own versions of the PRV. The most powerful versions they built were in the Atlantique 300 at 207 kilowatts (281 PS; 278 bhp) from a single turbocharged 3.0 L 12v, and they successfully raced at the 24 Hours of Le Mans with the 600LM with a twin turbocharged 24v 3.0 litre, pushing out over 450 kilowatts (610 PS; 600 bhp) in race spec, and the road-going spin-off, the 400GT managed 300 kilowatts (408 PS; 402 bhp). This used the low compression bottom end common to the Renault turbo engines, coupled to 24 valve cylinder heads with bespoke rockers and tappets.

Peugeot too allowed a small group of engineers to create a team for endurance racing, and after a few years the team grew to be called WM Peugeot. The ultimate version of the car used a low compression 3.0 litre bottom end coupled to bespoke twin-cam heads. It is the only DOHC PRV. This car still holds the top speed record at 24 Hours of Le Mans set in 1988. By taping over the engine cooling intakes to improve aerodynamics, the team managed to push the car to 407 kilometres per hour (253 mph) on the 5 kilometres (3.1 mi) straight before the engine was destroyed.

Volvo began to withdraw from the PRV consortium in the late 1980s, shifting its powerplant reliance onto in-house inline engines. Peugeot, Renault and Citroën continued using the PRV until 1997.

The original engineering work done on the V8 engine can still be seen in the resulting V6 engine: its cylinder banks are arranged at 90°, instead of the much more common 60°. V8 engines nearly universally feature 90° configurations, because this allows for a natural firing order. V6 engines, on the other hand, are generally arranged at 60° (again because of timing), but can be built as 90° engines, with either staggered timing or split crankshaft journals. 90° V6 engines are shorter and wider than 60° engines, allowing lower engine bay hood/bonnet profiles.