The vehicles are technically based on the VW Passat B6 and are the successor of the Sharan I  and Seat Alhambra I. Both are produced in the Auto Europa plant in the Portuguese Palmela .The world premiere took place at the Geneva Motor Show 2010.

The model was designed by Walter Maria de Silva and Klaus Bischoff and is very similar to the Touran GP2 . Both inside and outside, stylistic elements of the Touareg can be seen. In contrast to its predecessor, the Sharan II has sliding doors that can be operated manually or electric at extra cost.Sharan II and Alhambra II are offered as five-seater (2: 3) and optional as seven-seater (2: 3: 2). The seats of the rear two rows are unlike the predecessor not expandable or retrofittable, but they can easily be sunk. By the model year 2016, the Sharan II was also optionally available as a six-seater (2: 2: 2). The standard equipment includes u. a. seven airbags , ESP , a hill start assist, electrically adjustable and heated mirrors, an electric parking brake , electric windows, air conditioning and a CD radio. For a surcharge. Three-zone climate control, navigation system, driver assistance systems or a panoramic sunroof available. 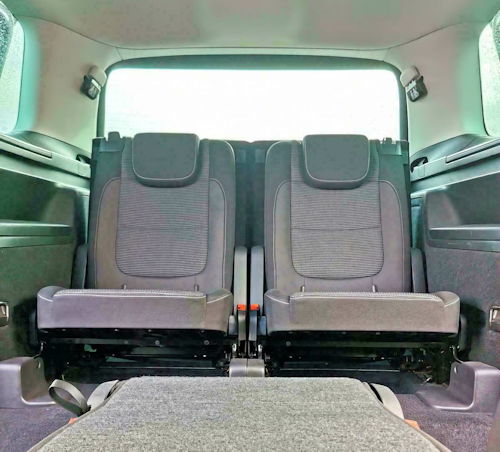 The vehicle offers compared to the predecessors of the same name by 22 centimeters longer platform. As a result, the trunk holds without a third row of seats 809 to 2430 liters. With third rows of seats, the volume is 267 to 2297 liters.

The trunk of the 5-seater version forms even after folding the 2nd row of seats no flat continuous surface. There are flat storage spaces underneath the loading area, which affects the permissible load distribution.

In the Euro NCAP crash test in November 2010, the VW Sharan got 34 points in occupant protection, 36 points in child protection and 16 points in pedestrian protection.

The special models of the VW Sharan are each based on the Comfortline equipment. The standard equipment usually includes 17 "alloy wheels, automatic air conditioning, heated front seats, multifunction steering wheel and fog lights, as well as sliding doors and / or luggage compartment door with electric opening and closing.They are each offered for one calendar year and bear the name Style (2011), Match (2011). 2012), Life (2013), Cup (2014), Beach and Ocean (both 2015), Allstar (2016) SOUND (2017), JOIN (2018) and IQ Drive (2019).

The range has been long running so many changes over the years.

For the model year 2011, the optional extras have been added such as park assist , adaptive chassis control and keyless start system.

To optimize fuel consumption, a start-stop system and brake energy recovery contribute. Another technical detail is an adaptive chassis control, called the Volkswagen Dynamic Chassis Control (DCC). The power transmission takes place via a six-speed manual transmission or a six-speed dual-clutch transmission . Since 2011, a four-wheel drive version is available.

For the 2012 model year, the Sharan got an additional storage compartment in the overhead console. The instrument cluster has been extended by an electronic parking brake indicator. In addition, the radio and navigation systems have been visually and technically revised. The special equipment has been supplemented by four-wheel drive, lane departure warning , traffic sign recognition and 18 "alloy wheels.For the 2012 model year, license plate lighting was also converted to LED .

For model year 2013, the front seats were equipped with new safety-optimized headrests. In addition, the luggage compartment flap got an ambient lighting. Optionally, DAB + reception and an electrical closing aid for the sliding doors have been available since then .

For the model year 2016, Sharan and Alhambra were mainly technically revised. The engines now all meet the Euro 6 standard and consume up to 15% less with partially increased engine power. A multi-collision brake is part of the standard equipment, an optional city emergency braking system, blind spot and lane change assistant and automatic distance control are available. The radio and navigation devices correspond to the current generation from the Golf VII and optionally enable smartphone integration with CarPlay , Android Auto or MirrorLink, The redesigned models are visually recognizable on the inside with new decors and steering wheels and on the outside with new LED tail lights. In the Alhambra, the radiator grille blades are now arranged horizontally instead of vertically.

For the 2017 model year, the medium wave reception for radios and navigation systems accounted for. The refrigerant in the air conditioner was changed from R134a to R1234yf and the automatic air conditioning was equipped with an allergen filter. The Sharan is only available as a 5- or 7-seater, the 6-seater option is eliminated. 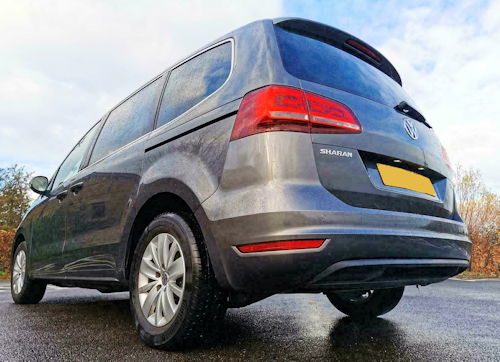