The VW T4 is a vans or minibus of the Volkswagen Commercial Vehicles brand . With the introduction of the T4 (VW internal model designation: type 70) in August 1990 - a completely new construction - went after 34 years also in the Volkswagen factory Hanover (since 1995 seat of Volkswagen commercial vehicles) the era of the rear engine and rear wheel drive to end. In 2003, the newly constructed successor VW T5 came on the market.

The T4 was the first van model from VW, which was available with two different body lengths and wheelbases. The new drive concept with transversely mounted in- line engine (later also VR engines ) and front-wheel drive enabled a continuous loading area. In 1992, the T4 was voted Van of the Year .

The wheels were suspended individually : on the front on double wishbones with torsion bar suspension , on the rear on semi-trailing arms with coil springs, which allowed a deep load compartment floor. The T4 had a rack and pinion steering . There was a power steering from the beginning with the vans with five-cylinder engines , with Caravelle GL and Multivan and from 1995 standard on all models. The four-cylinder models were still equipped with 14 "wheels at the market launch. At the rear axle there were drum brakes until the end of 1995. In the models without anti-lock braking system , the brake system was, as usual since the T2, with a load-dependent Brake regulator equipped to prevent overbraking the rear wheels in all loading conditions. An automatic transmission was only with five-cylinder engines and air conditioning only with engines from 2 liters capacity available.

In addition to the truck as a truck, which was used primarily by companies and authorities, especially the Multivan enjoyed great popularity, because he offered with the interior (folding table, bed, single seats in the second row) a lot of comfort for travel, but cars -like dimensions and was so handy in everyday life. In the US only this version - there with much better equipment than Eurovan called - version exported.

The T4 was available with two different wheelbases (2920 mm and 3320 mm)Unlike the earlier models T2 and T3 with rear engine, the flatbed truck had no lockable compartment "vault" under the loading area. The small storage space in the closed body between engine and cab was available in smaller version also in the double cabin of the T3 and was offered for the T4 by some accessories suppliers for retrofitting. 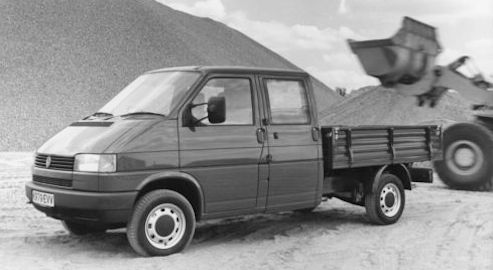 The T4 was offered in the following variants:

The T4 at the end of 1995, a "Great Product Upgrade" (GP), a proper name of VW for model maintenance . At Multivan, Caravelle and California, the front body was extended by eight inches. The hitherto rectangular radiator grille received in those upscale variants the then typical "happy face" VW, at the same time the headlights of the long front end car were designed by a wedge-shaped taper dynamic and complemented with white instead of yellow flashing lights. VW wanted to differentiate the car versions externally from the transporter variants, which retained the previous face unchanged until the end of production. Like all T4 but also the simple transporter got new, more elastic bumpers, from behind through now two rear fog lights easily recognizable (of which in Germany and in many other countries, for legal reasons, only the left actually contained a light unit).

The GP also included numerous technical changes. So all wheels had a new design and disc brakes now also on the rear axles. All diesel engine variants had an exhaust system with downwardly directed twin tailpipes and the variants with gasoline engine rear-oriented tailpipe. In the interior, new switches on the dashboard moved in, the dials, seat covers and interior trim were changed.

Along with the great upgrading of the product, VW introduced the TDI engine in the T4, a five-cylinder diesel engine with a displacement of 2.5 liters , which had its debut in 1990 in the Audi 100 with 88 kW (120 hp), but in the T4 75 kW (102 hp) ) was throttled. With the introduction of the long front end car, it was also possible for the first time to install the 2.8-liter VR6 engine with 103 kW (140 hp) - once again throttled compared to the passenger car version. Both new engines were recognizable by TDI or VR6 logos in the grille and at the rear, the VR6 had always additionally 16 "wheels and the grille slats painted in body color.

Finally, in 1998, the most powerful diesel engine , an uprated variant of the TDI engine with 151 kW (151 hp), externally recognizable by a red "I" in the lettering, 16 "wheels and only available with a long front end, at the same time became a lower-power version The TDI with 65 kW (88 hp) was subsequently supplied with a blue "I" in the lettering, while the 1.9 l four-cylinder turbo diesel remained a conventional vortex chamber engine until the end of production, recognizable by the manual cold-start train on the driver's seat. Also, the 2.4 l five-cylinder naturally aspirated diesel was not switched to SDI technology, but remained slightly throttled to 55 kW (75 hp) and provided with oxidation catalyst in the program. The last new release in 2000 replaced a strengthened version of the VR6 engine with 150 kW (204 hp) the previous engine, marked by a word V6 with red "6".

Over its construction period the T4 with different engine versions was delivered. The gasoline engines were all open-looking and had ex works intake manifold injection or carburettor . The diesel engines had vortex chamber injection, they were available with or without turbocharger. Later, there were also turbo charged diesel engines with direct injection (TDI).

The gasoline engines were available at the start of construction in various displacement variants - as a four-cylinder with 1.8 or 2.0 liters displacement and a 2.5-liter five-cylinder engine. The version with 1.8 liters and 49 kW was the only one that was equipped with a carburetor, all other gasoline engines had injection. The carburetor engine was offered from 1990 to 1992 as engine code PD . During this period, VW produced not only the model T4 but also the predecessor model T3. The engine was installed in 2020 vehicles altogether and is thus the least engine variant built.

The 2.0-liter gasoline engine with intake manifold injection, however, was installed in virtually unchanged form from the start of production in 1990 until the end of production in 2003 (engine code AAC with 62 kW), producing about 110,000 units and thus more than 50 times as many vehicles.

The five-cylinder engine, however, 81 kW, from August 1996, the power of these engines was increased to 85 kW. Of these engines, there were a total of six different versions, three each with 81 kW and three with 85 kW. The latter engines were available exclusively in the facelift version, as these were introduced a few months after the facelift.

Also with the facelift of 1996, the 2.8-liter VR6 engine with 103 kW in the T4 was introduced. From 2000, this engine was offered in an uprated version with 150 kW engine power. This most powerful T4 engine could only be ordered with an automatic transmission .

Until 1996, the diesel variants of the VW T4 were available exclusively with vortex chamber diesel engines. The weakest engine was a 1.9-liter diesel engine with 44 kW, which was installed in 144,720 vehicles. He was taken out of the program for model maintenance in December 1995.

The turbocharged version of this engine, offered since 1992 (engine code: ABL), produced 50 kW of power. It was with the setting of the 1X engine to the end of production, the smallest diesel engine of the T4 series, similar to the AAC in gasoline engines.

As a five-cylinder had the vortex chamber diesel in T4 2.4 liter displacement. The engines are considered the most durable in the VW T4. They were available in two versions: The 57 kW engine with the code AAB built to September 1998 was installed in 432,060 vehicles and is thus the most common T4 engine. In the last months of production, this engine could only be ordered in combination with all-wheel drive. His successor, the AJA, produced 55 kW, was factory-equipped with an oxidation catalyst , ran 74,460 times and was available until the end of production in June 2003.

In contrast to other models of Volkswagen commercial vehicles (VW LT and Caddy ), the T4 was never available with SDI engine (direct injection turbocharged).

From 1995, the popular turbodiesel direct injection engines (TDI) VW were also installed in the T4. The TDI was the T4 only as a 2.5 TDI. He had therefore just as 2461 cm 3 displacement as it did the five-cylinder gasoline engines in T4.

In 1998, a power reduced version with 65 kW power and the engine code AJT came on the market. Unlike all other TDI engines on the VW T4, this variant was not equipped with a charge air cooler. In the model lettering had the TDI lettering in these vehicles a blue "I". Another variant of this engine was marketed from 2001 under the engine code AYY, both remained until the production stop in the offer.

For the Syncro variants, which had a worse exhaust classification than the ordinary TDI, was also offered from 2001, a 75 kW engine with the code AXL. These engines were in spite of the engine power also 75 kW derived versions of the 111 kW engine. The AXL engines were not consistently installed in the T4 TDI Syncro, but merely supplemented the engine range. The ACV engine was thus installed in larger numbers in the T4 TDI than the AXL. Since the AXL engines require more space, the AXL Syncros were installed exclusively in T4 versions with a long front end (formerly called "Caravelle front").

The most powerful TDI engine with 111 kW was in fact only installed in the Caravelle and Multivan versions of the T4. All affected vehicles have a long front end. 18,990 vehicles built from 1998 to 2001 had the engine code AHY, while 28,950 vehicles produced between 2000 and 2003 have the code AXG.

A 1.9 TDI, however, has never existed in the VW T4, but only in the VW Transporter T5. Vehicles on the used car market offered as such are either mislabeled models with ABL engine (1.9 TD) or vehicles in which the owners will eventually replace the originally installed engine with 1.9 TDI engines from other VW models to have. 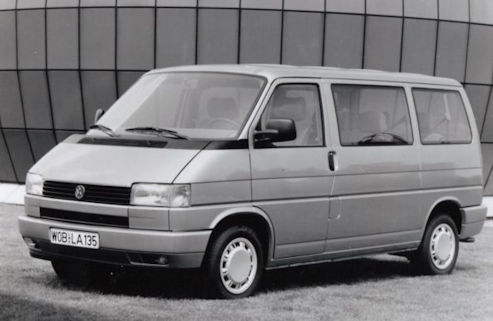