The VW Golf VII is the seventh series of the VW Golf .Volkswagen officially launched the Golf VII on September 4, 2012. The Golf VII became the European Car of the Year 2013 .Stars in the Euro-NCAP - crash test in 2012 5 out of 5.

Production started in early August 2012.  On April 9, 2013, the production of the starting GTI in the Volkswagen plant in Wolfsburg .

The production of the estate version Golf VII Variant began in April 2013  at the Zwickau plant in Zwickau and is delivered since the end of July 2013.

The Golf VII and the Audi A3 8V are the first two models of the Volkswagen Group based on the MQB platform . MQB stands for Modular Cross Modular ; the platform has been used since 2012 on new transverse engine models. Volkswagen developed the modular system to have more variability than the platform concept .  The internal combustion engines provide up to 228 kW (310 hp) in the Gulf R. All three or four-cylinder engines are new developments. The current diesel engines with 1.6 or 2.0 liters meet theEmission standard Euro 6 . There is also a gas-powered 1.4-liter turbo engine with 81 kW (110 hp), a plug-in hybrid with 1.4-liter gasoline engine (Golf GTE) and an electric car (e-Golf).

The Golf VII is 4.26 meters long and therefore 5.6 inches longer than its predecessor.  The air resistance could also be reduced by reducing the height (about 2.5 cm) by 14%.

VW stated in 2012, the curb weight of the Golf VII compared to the Golf VI (depending on the type) to have reduced by up to 100 kilograms.  In fact, the tare weight of the entry-level gasoline engine has fallen by 24 kg due to the use of high-strength steel grades, that of the 1.6 TDI BlueMotion Technology by 23 kg and that of the 2.0 TDI BlueMotion Technology by 11 kg. The luggage volume has increased according to VW by 30 to 380 liters; with folded rear seats, it is 1270 liters (Golf VI: 1305 liters). The ADAC measured with its measuring method, a 45 liter lower luggage volume than in the Golf VI. The fuel tank is now 5 liters smaller than before; he holds 50 liters or 55 liters in the four-wheel drive version.The external appearance was developed under the direction of Marc Lichte and Philipp Römers. For the interior Thomasz Bachorski was responsible for the lamps Andreu Sola.

The basic "Trendline" of the Golf includes an automatic start stop feature , a braking energy recovery system , a five-inch touchscreen screen in the center console, air conditioning and a multi-collision brake . This brakes the car after a first collision so that it still remains steerable, but at the same time is delayed so much that a second impact is mitigated or prevented as possible. In the diesel engines 1.6 TDI and 2.0 TDI, both with manual transmission, a  4Motion drive can be ordered.With the "Comfortline" and "Highline" further extras are added. The higher lines can be ordered with various optional extras, which are not available for the "Trendline". The models GTD, GTI Performance, R and GTE have their own equipment lines, which are located above the "Highline".

In addition to the multi-collision brake, a tire pressure monitoring system is one of the standard driver assistance systems.An emergency brake assistant is available, which as a precaution tightens the safety belts of the front seats during emergency braking and closes the windows and sunroof . A city ​​emergency brake function detects potential collisions and automatically initiates emergency braking at speeds below 30 km / h. In addition, glare-free high beam , a lane departure warning , an adaptive cruise control (ACC), an Attention Assist , a traffic sign recognition and a high-beam automatic available.

For all new orders since 2015 VW provides a manufacturer's warranty of 2 years without mileage limitation.  With special equipment, which differ in the maximum total mileage of 100,000 or 150,000 kilometers and in the charge, the manufacturer's guarantee of 2 to 5 years can be extended. 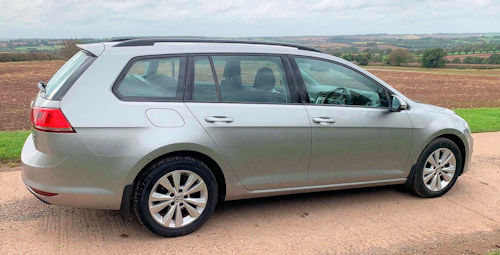 The Comfortline equipment has been combined with otherwise optional equipment features, which functionally and visually reach almost the highline level.

Golf V and Golf VI had a multi-link rear suspension . Such a construction is installed in the Golf VII from a motor power of 90 kW (122 hp). For vehicles with a weaker engine - as in the case of the Golf IV  - a torsion beam axle is installed. It is more compact, lighter and cheaper to manufacture. 36 percent of the body of the Golf VII are made of high-strength or ultra-high-strength steels.

Since February 2014, the model is available as an electric car e-Golf. It has three different driving modes: Normal, Eco and Eco +. In them, the power of the electric motor and the maximum speed are limited differently. In addition, it offers a regenerative braking (recuperation), the effect of which can be changed in three stages. The range to NEDC driving cycle is 190 kilometers, according to factory specifications 130 to 190 kilometers.  The quick-charging capability via CCS is subject to additional charge.

In August 2014, appeared with the Golf GTE a plug-in hybrid version with combustion engine and electric motor (before its debut as Golf Twin-Drive referred to ). According to the NEDC driving cycle , the electric range is 50 kilometers and the total range is 939 kilometers.

The Golf GTE, which is based on the GTI, uses a plug-in hybrid drive . The combined maximum power is 150 kW (204 hp). The vehicle can be used both as a hybrid and purely electrically. The electric range is up to 50 km.

Externally, the models differ in the blue design of the GTI red trim elements (lettering on the back, ribbon on the radiator grille) and the C-shaped daytime running lights on the front. The connection for the charging cable is located behind the brand logo in the radiator grille . The technical basis is identical to the 2013 presented Audi A3 e-tron .

The traction battery has a mass of 310 kg and consists of 27 modules with a total of 264 lithium-ion battery cells from the supplier Panasonic / Sanyo . Each cell has a carrier capacity of 25 Ah, the cell voltage is 3.67 V. The interconnection of three parallel branches with 88 cells in series results in a nominal voltage of 323 V and an energy of 24.2 kWh, of which 21.2 kWh is usable. The traction battery is not actively cooled (passive cooling by wind).

The interior of the e-Golf is air-conditioned as standard with an electric air-conditioning compressor and high-voltage heating with a maximum output of 5.5 kW. Since no waste heat from an internal combustion engine can be used to heat the interior, PTC heating elements heat a coolant, which transfers the heat via a heat exchanger to the interior.

As an option, a heat pump , a heated windscreen and the CCS DC 50 kW quick-charging capability are available for the e-Golf .  Through the heat pump, the power loss of the power electronics and of the electric machine can be utilized for the heating of the interior can be increased whereby the range compared to the pure high-voltage heating.As part of the facelift at the end of 2016, the e-Golf was also redesigned. The electric machine now 100 kW (136 hp) at 3300 rpm . The lithium-ion cells of the battery come from the supplier Samsung and their carrier capacity has been increased to 37 Ah, which increases the energy of the battery to 35.8 kWh.  The mass of the battery is kg at 318th Deliveries of the revised e-Golf started in 2017. Apart from Wolfsburg, the e-Golf has also been produced since April 3, 2017 in the Transparent Factory in Dresden.Visually, the e-Golf differs only slightly from the Golf with combustion engine. Like all Volkswagens electric and hybrid vehicles , the front is adorned with C-shaped daytime running lights. The upper part of the radiator grille has a blue trim and is closed for improved aerodynamics. The newly introduced model came to a c w value of 0.281.  The magnesium wheels are extremely light, aerodynamically optimized and the design of the wheels of the XL1 ajar.The basic equipment of the e-Golf is significantly more extensive than the engine-powered golf models. It is based on the "Comfortline" equipment line. Automatic climate control and Volkswagen's infotainment system are standard in every e-Golf. 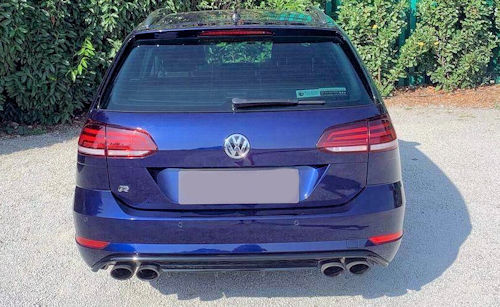