The Volkswagen Golf Mk6 (or VW Typ 5K) is the successor to the Mk5, and was unveiled at the Paris Auto Show in October 2008. Volkswagen released pictures and information on 6 August 2008, prior to the official unveiling. The vehicle was released to the European market in the winter of 2008. Major investments have been made in production efficiency, with a claimed productivity improvement at launch of nearly 20% in comparison with the previous model, and further gains planned for the next twelve months. Although billed as the Mk6, the new model was in effect a thoroughly re-engineered facelift of the previous model.

Like its predecessor, the Mk6 Golf is based on the Volkswagen Group A5 (PQ35) platform. Effectively it is a reskin of the Mk5 rather than an all-new design, it was developed with engineering improvements to shorten the previous model's excessive assembly time, and answered criticisms of that model's cheapened interior quality compared to that of the 1997 Mk4. 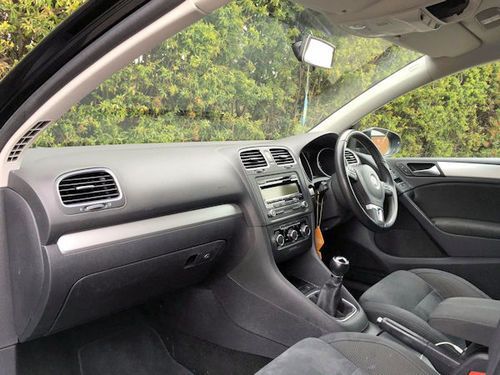 Improvements in equipment level on the domestic market Golfs include, for the first time in a Golf, the inclusion of air conditioning as standard.Additionally, dual-zone climate control is included in the Autobahn trim for North America.

The company is talking confidently about launching in Germany during 2009 a BlueMotion low emissions Golf and, in more general terms of possible alternative fuel versions later.

Available engines for North American Golf include the 2.5 L I5 engine from the previous Mk5 Rabbit and Mk5 Jetta and the 2.0-litre TDI. GTI version features the 2.0-litre TSI.

With safety features such as seven standard airbags, (up to nine in Europe, up to eight in the US) and standard Electronic Stability Programme (ESP), the Golf Mk6 has been awarded a five-star rating by the Euro NCAP crash test agency

The new Volkswagen Golf Cabriolet was presented at the 2011 Geneva International Motor Show, Volkswagen calls the new model "a new chapter of a global success story". The four-seater has a soft top with an electro-hydraulic drive that opens the Golf's top in 9.5 seconds. The top can also be opened or closed during driving at speeds of up to 30 km/h (19 mph). After a nine years without a convertible Golf, This will be the first Cabriolet model under the Golf family since 2002.

The new VW Golf Cabriolet's styling follows that of its hard-top three-door counterpart, but it differs somewhat with a new rear section, lower profile roof line and more swept-back angle of its front windscreen frame. Bi-xenon headlights are an option. Unlike the regular Golf, the Cabriolet has LED rear lights, which are only available for the R and GTI versions of the hardtop. Safety features include the automatically deploying roll-over bar, front airbags, side head/thorax airbags, knee airbag for the driver and ESP.

There are six turbocharged direct-injection engines whose power outputs range from 77 kW (105 PS; 103 hp) to 155 kW (211 PS; 208 hp). Four of the petrol engines (TSI) and one diesel (TDI) are available with the DSG dual-clutch gearbox; while three of the engines are available with energy-saving BlueMotion Technology.

In February 2012, Volkswagen announced that it would build a Cabriolet version of the GTI, powered by a 2.0-liter four-cylinder engine.

A facelifted variant Mk5 Golf Variant model was introduced in 2010 as the Mk6, despite carrying the front fascia, interior styling, and the drive line from the new Golf, the underpinnings are based on its fifth generation predecessor. It is sold in the USA as the Jetta Sportwagen, in Mexico and Canada as the Golf Wagon and in South America as the Jetta Variant or Vento Variant.

Volkswagen developed the Twin Drive system with eight German partners, and is planning a trial fleet of 20 Golfs outfitted with the system in 2010.

The production version was expected to be based on new Mk6 Golf, featuring a 1.5 L turbodiesel engine and electric motor, with estimated arrival date of 2015.

The vehicle was unveiled at GTI Meet at Wörthersee.

There was much speculation about this vehicle, with uncertainly surrounding its name. Golf R20 was the most common name used prior to the Frankfurt Motor Show.Once finally unveiled by Volkswagen at the Frankfurt IAA, on 15 September 2009, it was confirmed the R32 replacement would simply be called the Golf R.

In the United States and Canada, the car was sold as the Volkswagen Golf when it arrived in showrooms in October 2009, dropping the "Rabbit" badge that was used for the Golf Mk5. The wagon, a restyled version of the Mk5 and the only Golf model made in Mexico, is sold in Canada as "Golf Wagon", but in the United States retains the "Jetta SportWagen" designation (while wearing Golf front sheetmetal). North American Golfs will carry over the same engines as the Mk5 (the same 2.5L five-cylinder from the Mk5, the 2.0TDI and the 2.0T) and, while the GTI and TDI continue to offer the six-speed manual transmission: the 2.5 L will re-use the five-speed manual (automatic will be a six-speed tiptronic). The new Golf is also available in Mexico but for the time being only in the wagon configuration that is marketed as Golf Sportwagen that became available in early October replacing the Bora Sportwagen with the new Golf's front end.

To commemorate the 35th Anniversary of the Golf GTI, Volkswagen Motorsport enters the 2011 24 Hours Nürburgring with the “Golf24”. This Golf is equipped with a 2,500 cc five-cylinder turbo engine with 324 kW (440 PS) and 540 Nm, permanent 4WD and a sequential six-speed gearbox In the third VLN race of 2011, the Golf24 finished sixth overall, with its best lap only nine seconds slower than the fastest race lap, which was clocked by a Ferrari 458. For the 24 Hours, the team hopes for rain, and jokingly considered to wet the track by aerial firefighting. Eventually, though, neither of the three Golf24's finished the race, with one of them suffering a pit-entry accident and another blowing a gearbox. When the gearbox of the remaining Golf24 started overheating, VW decided to retire it to find out the cause of the gearbox trouble.