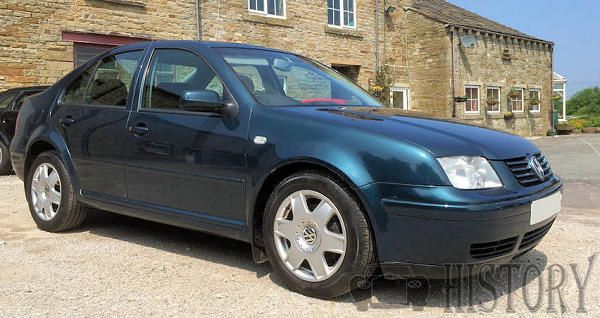 Production of the fourth generation car began in July 1999. Carrying on the wind nomenclature, the car was known as the Volkswagen Bora

in much of the world. Bora is a winter wind which blows intermittently over the coast of the Adriatic Sea, as well as in parts of Greece, Russia, Turkey, and in the Sliven region of Bulgaria. In North America and South Africa, the Jetta moniker was again kept on due to the continued popularity of the car in those markets.

The Mk4 debuted shortly after its larger sibling, the Passat, with which it shared many styling cues. The rounded shape and arched roofline served as the new Volkswagen styling trademark, abandoning traditional sharp creases for more curved corners. A distinguishing feature of the Mk4 is its Whiptenna, a trademark for the antenna on the rear end of the roof, which claims to incur less drag than traditional antennas due to its short length and leeward position. For the first time, the rear passenger doors differed from those of a 5-door Golf. The car was also offered as an estate/wagon (whose rear doors are also non-interchangeable with the others). New on this generation were some advanced options such as rain sensor controlled windshield wipers and automatic climate control. However, these were expensive extras and many buyers did not specify them on their cars; as a result the used market is full of sparsely equipped models.

Although slightly shorter overall than the Mark 3, the fourth generation saw the wheelbase extended slightly. Some powertrain options were carried over. Nevertheless, two new internal combustion engines were offered, the 1.8-litre turbo 4-cylinder (often referred to as the 1.8 20vT), and the VR5 (a 5-cylinder derivative of the VR6 engine). The suspension setup remained much as before. However, it was softened considerably in most models to give a comfortable ride, which was met with some criticism as it was still quite hard in comparison with rivals such from French makers.

In 2002, a new range of "Pumpe-Düse" Unit Injector diesel engines were offered. This new design employed advanced unit injectors, along with additional electronics and emissions equipment to meet new air emissions standards in Europe and North America, and is considerably more complex than the older diesel engines previously offered. To accomplish the task of producing sufficient power while meeting emissions standards, the "PD" technology injects fuel directly into the combustion chamber at pressures up to an incredibly high 2,050 bar (30,000 psi).The purpose of the high pressure is to promote fine atomisation of the fuel which supports more complete combustion. To reduce noise, the engine employs a "pilot injection" system which injects a small amount of fuel prior to the main injection. All of the new generation of diesel engines require a special motor oil which meets Volkswagen oil specification 505.01 (or newer). Serious damage to the engine, particularly the camshaft and injectors will result if oil not meeting this standard is used. 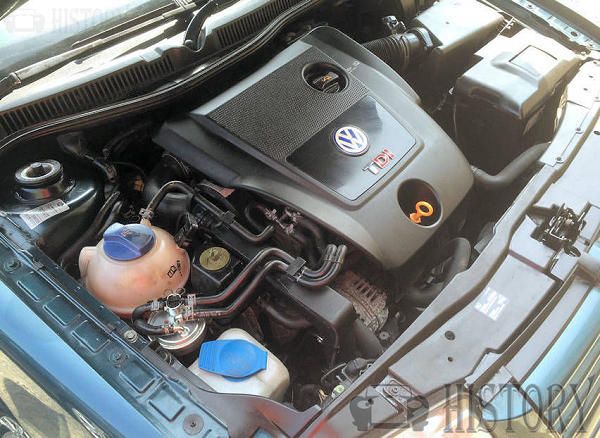 Safety on the fourth generation cars was a high priority for Volkswagen. The car was built using such advanced processes as highly mechanised presses, improved measuring techniques, and laser welding of the roof. In crash tests, the fourth generation car received very good marks. In the New Car Assessment Program tests conducted by the National Highway Traffic Safety Administration, the car received five out of five stars for both driver and passenger protection in a 56 km/h (35 mph) frontal impact.New side impact tests at 62 km/h (38.5 mph) awarded the car four out of five stars for both driver and rear seat passenger protection. Side curtain airbags became standard in the 2001 model year. In the more severe 64 km/h (40 mph) offset test conducted by the Insurance Institute for Highway Safety, the Mark 4 was awarded the highest score of "Good". Injury, collision, and theft losses were low for a car of its class.

Critics usually found the fourth generation acceptable. The car was praised for its adequate handling as well as a moderately comfortable ride. Other reviewers noted the car to be an ugly and somewhat expensive choice in the compact car segment, some simply referred to it as a Golf with a boot (trunk) on the back added as a last minute addition. Some complaints were made that the back seats lacked adequate room for two adults. Some found the seat cushioning too firm. The interior was praised for the high level of fit, but is quite bland, sparsely equipped, and uninspiring New in this generation was Volkswagen's signature blue and red instrument lighting which became standard in all models in 1999. The climate controls were placed low on the console. The recirculation mode cannot be turned on when air is vented to the windshield, and if the driver changes the climate control to vent air to the windshield, an internal mechanism would turn off the recirculation mode. The power outlet is recessed next to the ash tray and is covered with two flaps, one of which is shared with the ash tray. Retractable cup holders were placed directly above the stereo, obscuring vision of the stereo display and allowing beverages to spill on the stereo, gear selector, and other sensitive components during erratic vehicle movements. The flimsy plastic construction of the retractable cup holder is likely to fail with normal use Rear passengers have a pair of retractable cup holders located under the cylindrical ash tray on the center console. These problems were rectified in 2003 for the US market by placing two recessed cup holders in tandem in the center console and another behind the arm rest pedestal for rear passengers. The driver must raise the arm rest to access the center cup holder, and a large beverage occupying the front cup holder obstructs the driver's ability to pull the hand brake. European cars were given a redesigned retractable cup holder in front.

The earlier models have a few quality control issues, as a number of owners reported windows falling into the doors, electrical problems, and emissions system defects. The fourth generation takes approximately 52 hours per vehicle to assemble in the Puebla factory. 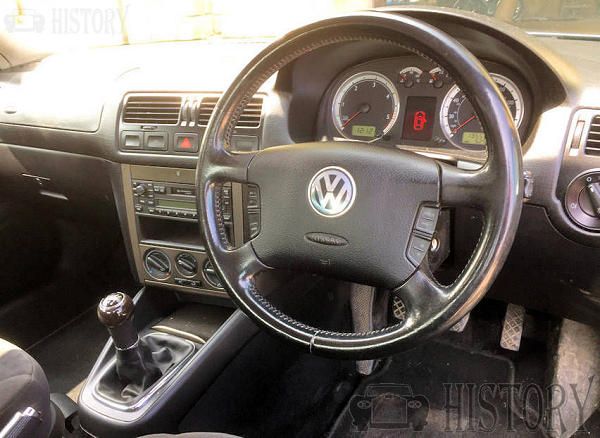 Volkswagen introduced an estate/station wagon version of the fourth generation car in January 2001 at the Los Angeles Auto Show.This was the first time an "A" platform Volkswagen was available in North America with that body style. Although the saloon/sedan was built in a number of locations, all Jetta estate models were built in the Wolfsburg plant. In back, 963 litres (34 ft3) of space was available in the cargo compartment. When the rear seats were folded, the car could hold 1473 litres (52 ft3). Like the saloon/sedan, the estate/wagon received high marks from most reviewers. They noted that the cargo area was large and useful. Additionally, the interior kept its top quality fit and finish, although the rear seat was still a bit small.

In Europe, the estate version was sometimes sold as part of the Golf line, either in addition to or instead of the Bora. Other than different front bumpers, fenders, headlights, and hood, the cars were identical. In some countries were sold both Golf and Bora Variant.

As of 2009, the fourth generation car is still sold in addition to the newer Mark 5, due to higher pricing of the fifth generation in some countries such as Colombia, China, Canada, Dominican Republic, Mexico, Brazil and Argentina. Like its second generation predecessor, the Mark 4 continues to be manufactured and marketed in China by Volkswagen Group's joint venture partner FAW-Volkswagen China.

In China, the car received a facelift in the summer of 2006, with a Passat Mk5 lookalike face. A hatchback version (i.e. the Golf) is also produced, but is badged as the Bora HS. The model available in Mexico, Canada, Brazil and Argentina for 2008 was likewise facelifted with the same design found in China. There is also a heavily modified Jetta called Volkswagen Lavida for the Chinese market.

In October 2006, Volkswagen re-released the fourth generation car in Canada (for the 2007 model year) as the City Jetta. The move was made to allow Volkswagen to be more competitive with the rest of the compact class as the fifth generation Jetta had moved upscale versus much of the competition. In 2008, the car was restyled to bring its looks up to date with the rest of the Volkswagen lineup. The only engine available is the 2.0-litre 8-valve SOHC 86 kilowatts (117 PS; 115 bhp) gasoline four-cylinder with an available six-speed tiptronic (with Sport mode) that was added as an option in 2008. In 2009, both model names were changed to Jetta City and Golf City. The Jetta City (since 2010MY) and Golf City (since 2011MY) are now both discontinued. The City Jetta is built alongside the fifth generation in the Puebla Assembly Plant.

In Mexico, the 4th generation Jetta has been Volkswagen's most successful model for years, peaking in June 2009 on the top 1 and being fourth as of October 2009, just below Nissan's Tsuru (Sentra B13), Chevrolet's Chevy (Opel Corsa B) and the Brazilian Volkswagen Gol. Nevertheless, it is the best-selling compact car in the country. Volkswagen decided to keep sales along with the Bora (Jetta V, which is the fifth best seller) with the tagline Why do we want a Jetta? Because the heart gives no reasons. In October 2010, the name "Jetta" was dropped, and the simpler name "Clásico" (Spanish for "classic") was chosen, suggesting this model may still be offered for years to come.

The Chinese model received further modifications in 2009, marketed as the New Bora with the wheelbase increased to 2,610 millimetres (102.8 in). 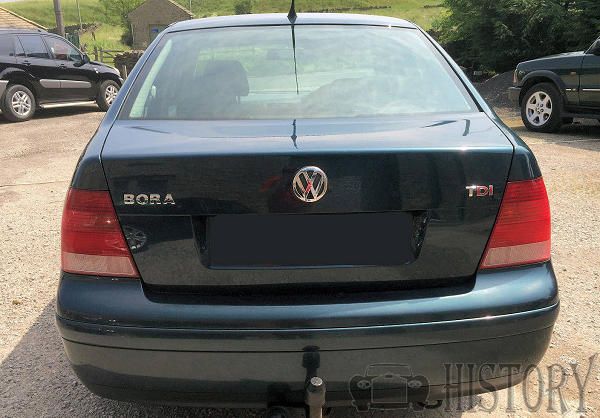