The second-generation Volkswagen Golf (also known as the Typ 19E until the 1991 model year, and Typ 1G thereafter) was launched in Europe at the Frankfurt Motor Show in September 1983. It debuted in 1984 in the UK, and it was introduced as a 1985 model in the US. It featured a larger bodyshell, and a wider range of engine options, including a GTD turbodiesel (in Euro markets, later using the 1.6 "umwelt" (ECO) diesel engine), a DOHC 1781 cc (1.8) 16-valve version of the straight-four GTI (as well as the tried and tested 1781cc (1.8) 8v GTI), the supercharged 8v "G60" with front- and four-wheel drive options, and a racing homologated variant of this, the "Rallye Golf". This model was meant to come to the US as well (badged as "Rallye GTI"), and prototypes were made, but it did not come to be.

During the life of the Golf 2, there were a number of external style revisions. Notable changes to the looks of the Golf 2 included the removal of quarterlight windows in the front doors, and the introduction of larger grill slats with the August 1987 facelift. The most notable was the introduction of so-called "Big Bumpers", which were introduced in the European market with an August 1989 facelift. They were available in the US from August 1989 as well, as part of the "Wolfsburg Edition" package. They were not standardized until January, 1990. 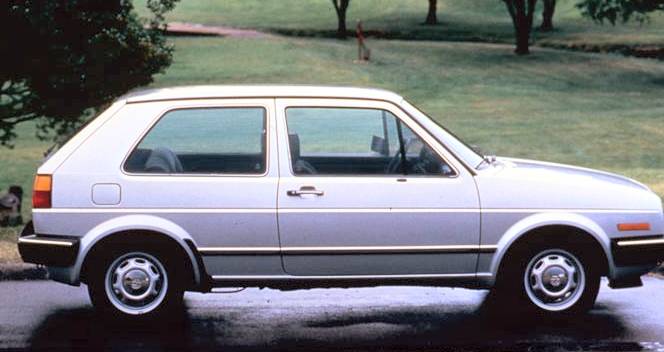 This Golf was marketed for the first time with that name in the United States and Canada. The Rabbit name used on the Mk1 was meant to give a car a cuddly image, but with the eighties redesign of the car, Carl Hahn, the former Volkswagen of America president who was now chairman of the whole company, dictated that Volkswagen model names be standardised globally. James Fuller, head of the Volkswagen brand in North America, concurred in using the Golf name to stress the car's Teutonic character. The GTI body kit became available on a non-injection Golf and was sold as the "Driver" trim level in Europe. While the GTI remained a trim level in the Golf lineup in Europe, in some markets, it was (and continues to be) marketed as a separate model line.

Volkswagen also produced their model in Yugoslavia, in a factory at Vogosca near Sarajevo, called Tvornica Automobila Sarajevo - TAS. The MK2 was produced from 1985 with a yearly production of 25,000 units until the war in 1990. This model was produced only for the six Yugoslav republics, with a rear badge Jx (which stands for less equipment than C and Cl), C and CL and TAS badge on the front grill. Engines were 1.3 (carburetor), 1.6 petrol and 1.6 diesel. 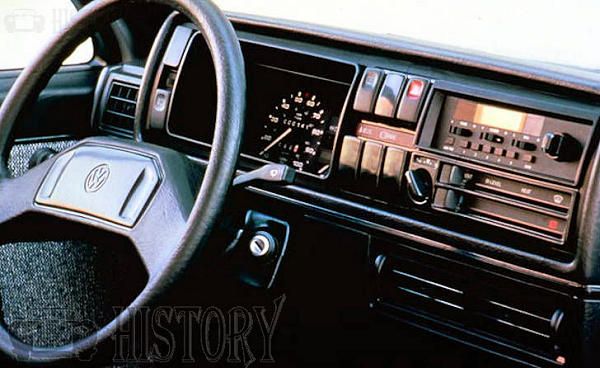 The Golf Mk2 was available as a 3- and 5-door hatchback. Its sedan sister car (available as a 4- and a 2-door model) was again called Jetta. No cabriolet version was developed from the Mk2; instead, the Mk1-based convertible continued to be produced, with minor changes.

New base engine was a 1.05 litre inline four; other engine offerings included 1.3, 1.6 and 1.8 litre petrol fours and 1.6 litre naturally aspirated or turbocharged diesel engines. In North America, all Golf Mk2s had 1.8 liter petrol or 1.6 diesel engines (the GTI, while not a Golf model in North America, also had a 2.0 liter model).

In February 1986, Volkswagen presented the first Golf with four-wheel drive. This Golf Syncro was available with the 1.8 engine only (90 PS (66 kW; 89 hp), later 98 PS (72 kW; 97 hp)). Its 4WD system had been developed in collaboration with Steyr-Daimler-Puch of Austria, and featured a viscous coupling and flexible partition of torque between front and rear axle. Due to its high price (in 1986, a Syncro cost about 30% more than an equivalent front wheel drive mode) the model remained rare; from 1986 to 1989, for instance, just 26,000 Syncros were built.

In 1989, the Rallye Golf appeared as a rallye "homologation special". Distinguishable by its box-flared wheel arches (similar to the Audi quattro, BMW E30 M3 and Lancia Delta Integrale) and rectangular projector headlamps, this model featured Syncro four-wheel drive, a cable shifted transmission and a G-supercharger 1763 cc (less than the typical 1.8L 1781 cc to meet the engine displacement rules) version of the injected 8 valve G60 1.8 liter engine.

None were officially sold in the USA. Two were brought over officially for testing and when the Pan-Am Lockerbie Scotland bombing occurred the Volkswagen of America (VWOA) official that was in favor of selling them died, so did the hope of these being sold in the USA.

Based on the Rallye Golf, a very limited edition Golf Mk2 variant exists, combining all of the high-line options available at the time. Designed and hand-built by the Volkswagen Motorsport division; only 71 of these "Golf Limited" models were produced. The exclusive feature package included a G60 supercharged version of the 16-valve GTI engine, mated to a sports transmission and Syncro four-wheel drive mechanism. All of these special edition models came in gunmetal grey, with five doors (except two examples built with three doors), BBS RM wheels in 6.5Jx15", US bumpers, a plain two-headlight grille with a unique blue detail, black VW logo, Hella tinted taillights, motorsport badges and a special numbered plaque. It is rumored that two examples were built with air conditioning. In 1989, these cars cost in the region of DM 68,500 each and were primarily sold to VAG executives and management, although a few are known to exist in Britain as of 2005. These cars produced 210 PS (154 kW; 207 hp) 252 N·m (186 lb·ft) and 0–100 km/h (0-62 mph) in 7.2 seconds, making them the most powerful VW Golfs ever produced until VW released the Mk4 R32 with 241 PS (177 kW; 238 hp) in 2003

There was also a version called Golf Country (3,000 cars), designed for light off-road driving. It had more suspension travel, four-wheel drive, bullbars (generally over a single headlight grill), a skid plate for protecting the engine area, and a spare wheel mounted externally on the back.

In Europe, it was offered with the acclaimed 114 bhp (85 kW) 1.8 8v petrol engine. There were also: 160 "Country Allround"; 558 " Country - Chrompaket" with Chrome bullbars and beige leather interior; and 50 "Country GTI" for VW-staff. The Golf Country was particularly popular in Alpine regions in central Europe.

In 1984 Volkswagen, in cooperation with RWE, released the second generation 'Gold citySTROMer, an electric version of the Mk2 Golf. It was the first electric Volkswagen to enter serial production as the Mk1 citySTROMER was only a prototype vehicle. The Mk2 citySTROMer had a range of approximately 31 mi (50 km) and used 16 gel-electrolyte batteries mounted under the cargo area and rear seats. Just 100 Mk2 citySTROMers were produced and sold for 45,000DM (~US$34,000) until production ceased in 1985. The citySTROMer name was continued in later models; the Jetta citySTROMer and the Mk3 Golf citySTROMer

As with the North American Rabbit, the second-generation Golf was produced for North America in Pennsylvania. When sales in North America failed to live up to expectations and with increasing productions costs, the Westmoreland Assembly Plant was closed in July 1988. Subsequent Golfs sold in North America came from the Puebla assembly plant, in Mexico. The Mk2 Golf was discontinued in Europe in 1991, but Mexican-made Mk2 models remained available in North America for another year.

In its first year on sale in North America, 1985, the Golf 2 maintained sealed-beam square headlights, while the GTI bore flush headlights (from the Jetta). All Golfs gained the flush "aerolamps" in 1987 after a design freshening to move it more upscale in the wake of the introduction of the Brazilian-built Fox (Voyage in Brazil) in North America. This is also the reasoning for the model being called "Golf GL", while virtually no equipment changes occurred. The 1985 U.S. models are easy to distinguish from subsequent models due to the absence of a high-mounted brakelight; these became required of all cars sold in the U.S. for 1986.

The GTI was Motor Trend magazine's Car of the Year for 1985, as well as VWVortex's "Best Golf of all time". The Mk2 GTI failed to make the same waves as the Mk1, and failed to win back the Golf GTI's fanbase which had adopted the Peugeot 205 GTI. In North America, where Peugeot did not sell the 205 in any guise, Volkswagen faced tough competition from the Honda Civic S (later Si)

In its first year on sale in the U.S., Golf sales were eight percent below those of the 1984 Rabbit. Sales of the all-new 1985 Jetta, by contrast, skyrocketed compared with the 1984 model. In 1986, the Jetta became VW's bestseller in North America, a position it has held ever since. 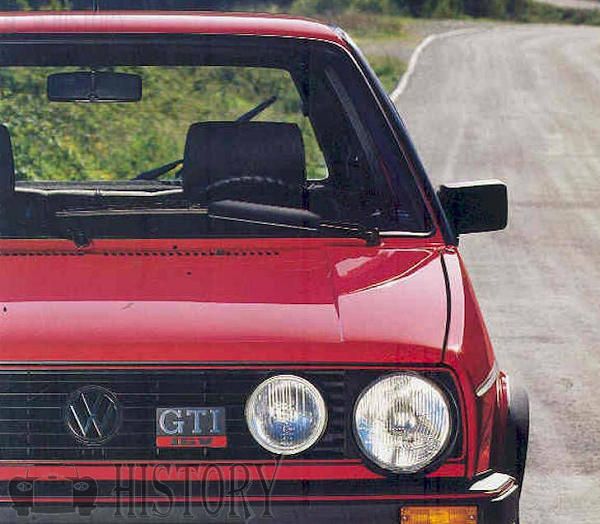 As with the Mk1, there was a "warm hatch" version known as the Golf GT. Introduced in 1987, it featured the GTI's exterior styling, namely the red stripe exterior trim, and wheelarch spoilers but with a standard 1.8 L engine, available in an automatic and with 4 doors (unlike the GTI). It only lasted for a few years, but with the reintroduction of the GTI in 1989 (the GTI 16v was produced continuously from 1987–1992), this model bore the concept. Year by year, the GTI with the 8 valve engine lost its GTI-like features, getting standard Golf brakes in 1990, suspension in 1991, losing the MFA computer, and finally being optional with an automatic, a first in GTI history. All GTI models got the European quad-headlight grille with the upgrade to big bumpers in 1990.

In Japan, all models were available as CLI and GLI, with the GTI edition also available.

Sales in the UK were strong; though it never quite made the top 10 for sales in any of the eight years in sale, it came close. In 1990, it was the UK's 12th most popular car with almost 50,000 sales. As of 2012, over 20 years after the Mk2 Golf's demise, it is still a very common sight on British roads and is being recognized by many as a growing classic, quite unlike many other similar-sized cars of its generation, such as the Austin Maestro.

Due to the small size of these cars, availability, and the current relatively low price, the Golf Mk2 is popular with enthusiasts and has its own dedicated UK club, the 'VW Golf MK2 Owners Club'. Modifications such as engine transplants are very common, the most popular being 2.8l or 2.9l VR6 from VW Golf Mk3's, 1.8T's from VW Golf Mk4's, the cheaper options being the 2.0l GTI (both 8v and 16v) from the Volkswagen Golf Mk3. 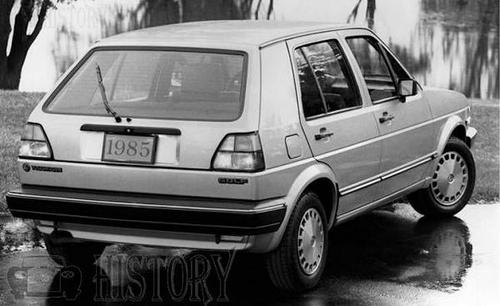