In May 1974,Volkswagen presented the first-generation Golf as a modern front-wheel-drive, hatchback replacement for the Volkswagen Beetle.

Like its predecessor the Volkswagen Beetle, the Volkswagen Golf Mk1 has proven to be influential. In continuous production since 1974, the Golf was one of the first widely successful front-wheel drive hatchbacks. In the USA, the Morris Mini, Honda N360 and Fiat 128 saw only limited success, but it was the Rabbit, along with the Honda Civic that sparked another generation of European-derived front-wheel drive American compacts, such as the Dodge Omni, Plymouth Horizon, Ford Escort and Chevrolet Cavalier in the 1980s, just as the Beetle inspired Falcon and Corvair in 1960s and subcompact Vega and Pinto in the 1970s.

The solution arrived with Auto Union. They had attracted a small following with their technologically advanced Audi front wheel drive medium sedans. Volkswagen had acquired the Ingolstadt-based company in 1964 from Daimler-Benz. Audi's expertise in water-cooled engines and front-wheel drive would be essential in developing a new generation of Volkswagens. The Audi technology in the Golf would regain for Volkswagen the engineering lead over rear drive cars that Ferdinand Porsche had bestowed on the original Beetle over its large conventional peers. The small Golf had to succeed in replacing the high volume Volkswagen sedan. The upmarket Dasher/Passat would be VW's first front wheel drive car, and it was relatively well received for its lower volume market. The Golf would adopt an efficient "two-box" layout with a steep hatch rather than a formal trunk, which would be later added in the Jetta. The water-cooled engine would be mounted transversely in the front. Work on the Golf began in 1969, shortly after Kurt Lotz became head of Volkswagen. 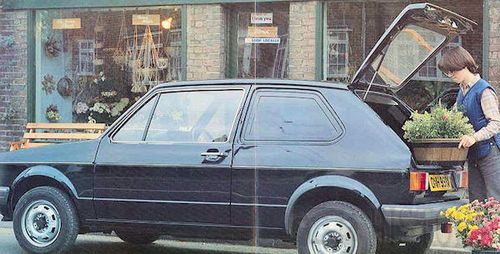 The first Golf (VW internal designation Typ 17) began production in 1974, although it was marketed in the United States and Canada from 1975 to 1984 as the Volkswagen Rabbit and in Mexico as the Volkswagen Caribe. It was a water-cooled, front wheel drive design in a hatchback body style. It featured firmly sprung and damped, independent Macpherson strut front suspension and semi-independent Twist-beam rear suspension, that gave crisp handling and good roadholding, without being too uncomfortable.

The Golf was designed by Italian automobile architect / designer Giorgetto Giugiaro, of the ItalDesign design studio. Giugiaro had also designed the Alfasud and the Lotus Esprit Mk1.The car changed little before being replaced (in Europe) by the Mark 2 version in 1984. However, air conditioning became available as an option on the domestic market in August 1975.The possibility to retrofit the installation, together with a larger battery, was offered to existing owners. 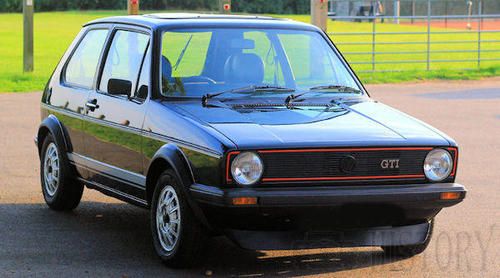 In 1975 a sports-oriented variant of the Volkswagen Golf, called the Golf GTI was introduced in March of that year at the Frankfurt Motor Show

The idea behind was rather straightforward - take a basic-transportation economy car and give it a high-performance package, making it practical and sporty. It was one of the first small cars to adopt mechanical fuel injection. In 2004, Sports Car International declared the Golf Mk1 GTI to be the 3rd best car of the 1980s.

There was a minor facelift in 1980 which saw the adoption of larger rear lamp clusters (more in line with Giugiaro's original concepts), moulded black plastic bumpers, a new dashboard with a more modern-looking instrument display featuring LED warning lights, and for US versions rectangular headlights. carrying capacity: 992 1b, 450 kg - 4-dr. 937 1b, 425 kg.

Contrary to popular myth, the Mk1 Golf GTI was not the first hot hatch by "quite a margin" The Renault 5 Alpine (called Gordini in the UK) comfortably predates the GTI, and is actually slightly faster than the Mk1 Golf GTI, managing 0-60 mph in the same 9.6 seconds "or so"as the first 1600 GTI, but squeezing out a further 2 mph (3.2 km/h) over the Golf. Nevertheless, the Golf GTI was perhaps the first hot hatch with mass market appeal, and many other manufacturers since have created special sports models of their regular volume-selling small hatchbacks.

The convertible version, named the Golf Cabriolet (or Typ 155) in Europe and Canada ("Rabbit Convertible" in America originally and renamed in 1985 to "Cabriolet"), was sold from 1980 to 1993. It had a reinforced body, transverse roll bar, and a high level of trim, and kept the pre-1980 style of rear lamp clusters. The Mk1 Cabriolet is of unibody construction built entirely at the factory of Karmann, from stamping to final assembly; Volkswagen supplied the engine, suspension, interior, etc. for Karmann to install. The vinyl or cloth tops were heavily insulated and manually - or beginning in 1991, electrically - operated, with a heated glass rear window.

The body of the Cabriolet did not change through the entire production run except for a larger fuel tank and smaller spare tyre introduced in the 1984 model year. In an attempt by Volkswagen to keep the car's styling current, all Cabriolets from 1988 on were fitted with a "Clipper" kit out of the factory, featuring smooth body-coloured bumpers, wheelarch extensions, and side skirts.

There were a few special editions of the Cabriolet including the Etienne Aigner, Carat, CC, Wolfsburg, and Best Seller editions. One of them was produced in Italy using Golf II Country engine and transmission by ACM, called "Golf Country Cabrio" and sold as "Biagini Passo".

From 1984 to 2009, Volkswagen of South Africa manufactured two variants of the Mk1 Golf, the five-door Citi Golf and the Volkswagen Caddy pickup.

On September 22, 2006 in order to celebrate the continued success of the Mk1 based Citi Golf in South Africa, Volkswagen SA announced the limited edition Citi R which is powered by a 90 kW (120 hp/123 PS) 1.8L fuel injected engine with a five-speed manual transmission as well as a GTI trademark red outlined front grill.

There was a special version, named LX with 1.1L engine, which produced more power than the 1.3L engine. This version had a tuned GTI-like front grill, four front headlights, spoiler, alloy wheels and Recaro seats.

The 2007 VW South Africa Citi Golf range starts with a standard Citi Golf, in either 1.4 or 1.6 litre fuel injected models. Many variants of the standard version are/were available with different extras packages, which included the Citi Rhythm, Citi.com and so on. The range topper is the CitiRox, also available in 1.4i and 1.6i, made as sportier versions of the standard Citi to replace the previous sports version, Velociti and Citi Life. The later Citi Golfs produced feature modern features, such as a new dashboard adapted from a Škoda Fabia, and minor body "facelifts" such as revised tail-light clusters. 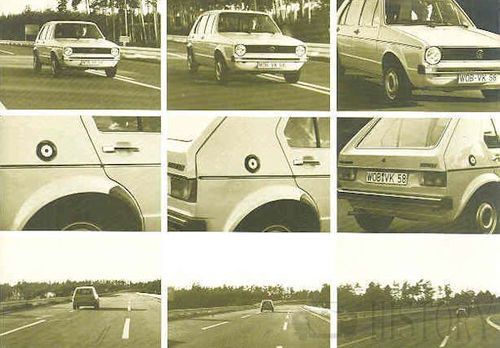 In 1978, Volkswagen began producing the North American "Rabbit" version of the Mk1 Golf at its Westmoreland plant. Former Chevrolet engineer James McLernon was chosen to run the factory, which was built to lower the cost of the Rabbit in North America by producing it locally. Unfortunately, McLernon tried to "Americanize" the Golf/Rabbit (Volkswagen executive Werner Schmidt referred to the act as "Malibuing" the car) by softening the suspension and using cheaper materials for the interior.VW purists in America and company executives in Germany were displeased, and for the 1983 model year the Pennsylvania plant went back to using stiffer shocks and suspension with higher-quality interior trim.The plant also began producing the GTI for the North American market. ('Rabbits' were built in Pennsylvania until 1984). The first Volkswagen Caddy pick-up, based on the Mk1 Golf, was also created at the Pennsylvania plant.

The Volkswagen Rabbit GTI, the North American version of the high-performance Golf GTI, debuted in Canada in 1979 and the United States in 1983. Assembled from parts made in Mexico, Canada, Germany and the U.S. in Volkswagen's Westmoreland assembly plant, it had the same Mk1 chassis, and the same A1 body type as the Mk1 Golf GTI that had been on sale in Europe since 1976, with a few exceptions. Key distinct features of the Rabbit GTI were its squared front end styling, and its alloy "snowflake" wheels. The interior came in red or blue felt and leatherette trim. The squared styling of the front end, particularly the wraparound direction indicator lights, gave it added safety and slight improvement in performance. Under the hood, the engine was a JH 1.8 litre 4-cylinder gasoline engine that ran on unleaded fuel. The JH 1.8l was transversely mounted, and it would peak in stock condition at 90 hp (67 kW), delivered through a close-ratio five-speed manual transmission. Claims for gas mileage of near-perfectly tuned Rabbit GTIs range between 25 mpg-US (9.4 L/100 km; 30 mpg-imp) and 30 mpg-US (7.8 L/100 km; 36 mpg-imp). 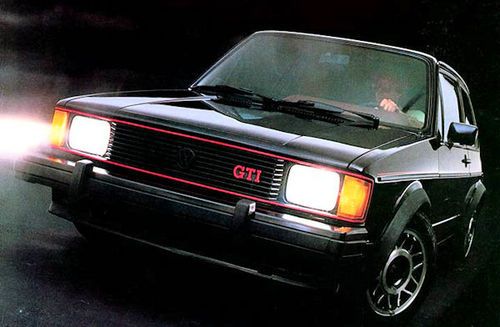 When the Rabbit GTI first appeared in Canada, it featured the 78 hp 1.6L K-Jetronic engine and wide ratio five-speed transmission. It was initially available in red, white, and black. These Canadian cars were German-built and were nearly identical in bodyshell and interior appearance to the 110 hp (82 kW) Golfs built in Europe. Unfortunately for enthusiasts, the entire driveline and running gear was identical to the other Canadian versions. Five-MPH bumpers were fitted as well as anti-intrusion bars within the doors. The towing eye integral to the front of the European car was deleted as the crashworthy bumper's shock absorbers had towing facilities as part of their design and the car had been crash-tested for Canada with the North American front apron. The car was very attractive but drove no better or worse than a Rabbit of the same era. Only with the arrival of the American GTI was a faster Golf available in Canada, and it was down 22 hp (16 kW) compared to the 1.8 litre Golf GTI Mk1. A small number of European specification GTIs made it to Canada under an agreement with the government that allowed foreign soldiers training at Canadian military facilities to bring their personal vehicles with them. As a result of this, VW made available (for many years) all unique European model parts required through VW of Canada. It was possible then, although expensive, to build a "real" GTI. Some enthusiasts did so based on the reputation of the European car.

The Golf MkI was introduced in Mexico as the Volkswagen Caribe in May 1977 as a 5 door hatchback. It came standard with a 4-speed manual gearbox and 1.1 50 HP and 1.6 liter 66 HP engine. The car was an instant success. As the 1978 model year lineup expanded with the 3-door vehicle, it was divided into two different trims: Normal and L. Both trims had a manual, 4-speed, 1.6 liter engine. In 1979 the GL trim was added.

In 1980 the Caribe received rectangular headlamps as well as some new colours. In 1981 the Caribe changed to include many features from the American 1981 Rabbit (an alternate name for the Golf). In 1983 and 1984, due to the financial crisis in Mexico, the Normal version was renamed 'C' and the L was discontinued, leaving the C and GL as the only trims offered. Both versions received a new dashboard from the 1980 European Golf. In 1984 the slow-selling diesel Caribe C was officially dropped, but the Caribe GT appeared, derived from the Golf and Rabbit GTI. This souped-up version featured a 1.8 litre engine with 85 hp (63 kW) and included a carburettor. 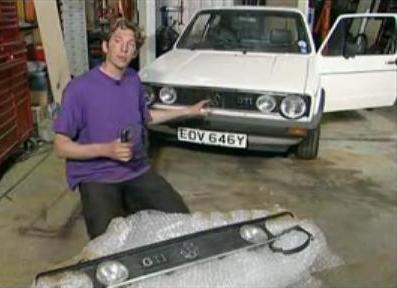