The third-generation Volkswagen Golf Mk3 was a car launched in Europe in November 1991 (though not in the United Kingdom until March 1992),and in North America in the spring of 1993. The delay in North America was due to Volkswagen's decision to supply U.S. and Canadian dealerships with Mk3 Golfs (and A3 Jettas) from the VW plant in Puebla, Mexico. Quality control problems led Volkswagen of America to reject Golfs and Jettas from Mexico; shortly thereafter labor unrest at the plant delayed production there even further. The third-generation Golf and Jetta first appeared in North America as 1993 models in the San Diego, California area and in Canada, then in the autumn in the rest of North America as 1994 models. The Mk3 Cabrio replaced the Volkswagen Cabriolet, which continued the original Golf until 1993, although the original Golf, sold as Rabbit in the United States and Canada ceased sales in 1984. The Mk3 Cabrio continued until the 2002 model year, when Volkswagen replaced it with a convertible version of the Volkswagen New Beetle.

Three-door Golfs of this generation were mostly only available in North America in GTI form. For the first time, an estate was produced, bringing it into line with key competitors such as the Ford Escort and Vauxhall/Opel Astra which had long been available as estates. The GT variants included a 2.8LVR6 engine, and a convertible launched as the Cabrio (Typ 1E).

The Volkswagen Golf Mk3 Cabrio (or Typ 1E) was introduced in 1993. It was facelifted in late 1999 with the front, rear, and steering wheel styling from the Golf Mk4 while still maintaining the body from the Mk3 Cabrio. These Cabrios are often referred to as the Mk3.5 Cabrios. The Volkswagen Golf Cabrio was discontinued in 2002.

A 16-valve version of the third-generation Golf GTI was introduced in 1993. The engine was enlarged to 2.0 L, with power now reaching 150 PS (110 kW/148 hp). While less powered than the VR6, it was still relatively popular with driving enthusiasts in Europe, because it offered similar power without the thirst or tax burden of a 6 cylinder. As with previous versions the Golf Driver took its place as the official GTI-look-alike but with a single-point injected 1.8 L engine.

The Golf Mk3 was also the predecessor of the "diesel craze" that swept through Europe in the late 1990s and early 2000s, when Volkswagen introduced the direct-injection system with the 90 PS (66 kW; 89 hp) Golf TDI in 1993.

The Golf Mk3 was also available in "Ecomatic" form. It was powered with a diesel engine and a clutchless manual transmission. The vehicle would freewheel by opening of the clutch as soon as the accelerator is released, and the engine was switched off after a further 1.5 seconds of inactivity, whether by stopping or coasting. Re-starting the engine simply required depressing the accelerator pedal. VW had previously pioneered similar technology in the VW Polo "Formel E" in the 1980s.

There was also a limited production run of around 250 "CityStromer" vehicles, mainly sold to the German market, which were fully electric vehicles, incorporating 6 batteries in the engine bay, and a further 10 underneath the luggage area. It had a range of approximately 50 km. The vehicle could be filled with a small amount of diesel to provide heat for the cabin.

As had happened with the Mk1 and Mk2, the Mk3 remained available in US for a year after it was discontinued in Europe (1998). The Mk3 continued to be produced for the 1999 model year where it was sold in North and South America. These 1999 Mk3 cars were the last produced in the world and sold alongside the Mk4 in showrooms. 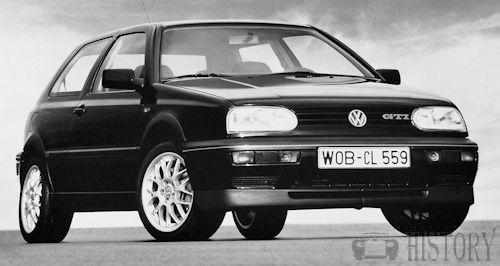 Volkswagen produced a limited quantity of 1000 special-edition 3 and 5-door GTI Anniversary models, celebrating 20 years of the GTI model. This had the usual GTI specification but came equipped with special chequered Recaro front sport seats and matching rear seats bearing the GTI logo, red seat belts front and rear, half-chromed and leather golf ball gear knob, red stitched leather steering wheel and handbrake gaiter. The release knob on the hand brake was also red and silver instrument dials. Floor mats also had red piping along their edges. The red theme continued externally with a red striping on the bumpers and red brake calipers. The wheels were 16" x 7" split rim BBS RS 722 alloys, visually similar to the 15" that were found on VR6 model. Brush stainless steel rear twin tailpipes on the exhaust and smoked front fog and indicator lamps to match the rear lamps. 3 optional extras were made available; electric sunroof, air conditioning and metallic black paintwork. Insurance was based on the standard GTI which made this version a very desirable model. The edition was sold in only 6 colour schemes and the 1000 number figures that were produced was as follows; 600 8 valve models, 150 16 valve models and 250 TDI models.

The diesel model was only produced for the European market and was not sold in the UK. Unfortunately many of the models fell into the UK company car and lease market prior to the second-hand market and its believed only a few hundred still survive. However, another factor in the rarity of Mark 3 Golfs, unlike the excellent build quality of the Mark 2, at least in the UK, is the very low quality steel sourced by VW on some occasions, and used across the range, from entry model to VR6. According to independent mechanics and parts specialists, and MOT testers, the floorpan, both door sills, and rear hatch can suffer severe rot and disintegration, and anybody planning to buy one is advised to check for rot, and holes and patches to the floorpan. 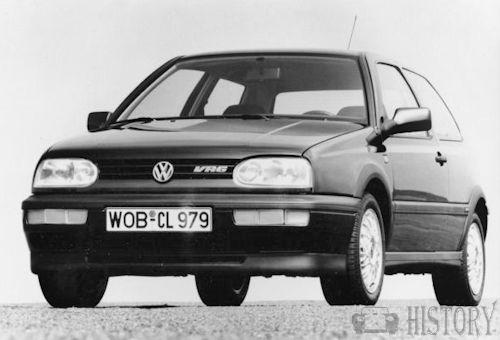 Volkswagen originally created the Design series to tour at International Auto shows. Due to the huge public response of the original four Design series, 60 more were produced. Eventually, the model was released as an option in Europe, but only 264 were made and offered in 1996 in the North American market.

The Harlequins were produced by swapping the body panels of four different colored Golfs. They are usually designated by their base color (the color of the car with no body panels attached). The base color is not repeated on any of the other body parts.

European Car of the Year

The Golf MK3 was voted European Car of the Year for 1992 - the first Volkswagen to win this award. 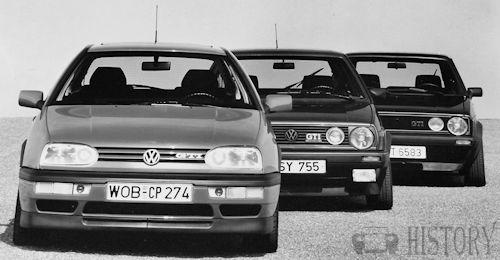