Following the Volkswagen Group's acquisition of Audi in 1964, Volkswagen used new engineering expertise to develop a modern front-wheel drive car with a water-cooled engine, and thus the Passat and Golf (the latter being introduced in 1974) were the first of a new generation of Volkswagen cars. The first Passat was developed partly from the Audi 80/Fox and, until 2005, the two shared a history.

During its development phase, the Passat was designated internally as EA400 (Entwicklungsauftrag 400, or "Development Order 400"), and well before its launch, production of the Volkswagen Type 3 at the Wolfsburg plant had been stopped in order to free up capacity for the new car. Wolfsburg was able to ramp up production carefully: directly before Passat production started the lines were used to assemble small volumes of the car's Audi 80 sibling which had been launched a year earlier.

The nameplate Passat derives from the German word for trade wind — and the period in its history when Volkswagen named vehicles after prominent winds, including also Golf (after the Gulf stream), Jetta (after Jet stream), and Scirocco (after Sirocco). 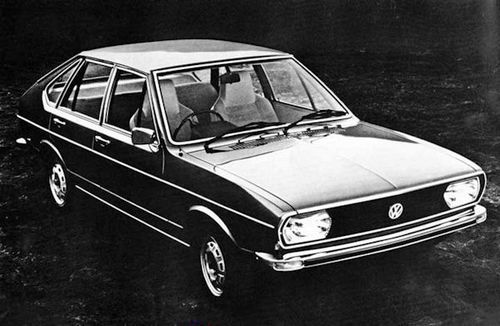 The original Volkswagen Passat was launched in 1973. The body types offered originally were two- and four-door sedans and similar looking three- and five-door versions. Externally all four shared a modern fastback style design, styled by the Italian designer Giorgetto Giugiaro. In essence, the first Passat was a fastback version of the mechanically identical Audi 80 sedan, introduced a year earlier. A five-door station wagon/estate was introduced in 1974. In Europe, the Passat was equipped with two rectangular, two round 7-inch, or four round 5.5-inch headlights depending on specification. The Passat was one of the most modern European family cars at the time, and was intended as a replacement for the aging Volkswagen Type 3 and Type 4.

The second generation Volkswagen Passat was launched in 1981. The platform, named B2, was slightly longer and the car's updated styling was instantly recognisable as a Passat, with the most obvious difference being the rectangular headlights. In addition to the Passat hatchbacks and Variants (estate/wagon), there was also a conventional three-box saloon, which until the 1985 facelift was sold as the Volkswagen Santana in Europe. In North America, the Passat/Santana was sold as the Volkswagen Quantum, available in three-door hatchback, four-door sedan, and a wagon model, but the five-door hatchback was never sold there and the three-door hatchback was dropped after less than two years. The four-wheel drive Syncro version was introduced in October 1984, initially only with the more powerful five-cylinder engine.

The third generation Passat was introduced in March 1988 in Europe, 1990 in North America, and 1995 in South America. The lack of a grille made the car's front end styling reminiscent of older, rear-engined Volkswagens such as the 411, and also doubled as a modern styling trend. The styling was developed from the 1981 aerodynamic (cd 0.25) Auto 2000 concept car. 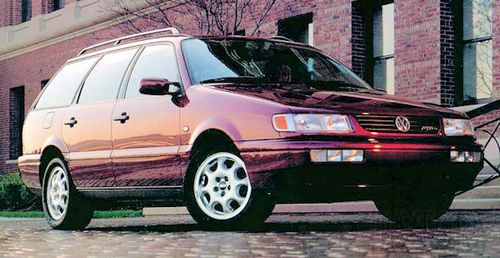 The B3 Passat was heavily facelifted in 1993 and although it was designated B4, it was not an all-new model. The facelift revised external body panels except for the roof and glasshouse, with most obvious exterior change seeing the re-introduction of a grille to match the style of the other same-generation Volkswagen models of the era, such as the Mk3 Golf and Jetta. The interior was mildly updated and included safety equipment such as dual front airbags and seat belt pre-tensioners, although the basic dashboard design remained unchanged.

An all-new Passat, based on the Volkswagen Group B5 platform, was launched in 1996 in Europe, and 1998 in North America. Its PL45 platform was shared with the first-generation "Typ 8D" Audi A4, which was unveiled 2 years earlier, and saw a return to the Passat sharing its longitundinal engine layout platform with Audi's equivalent model for the first time since the second-generation (B2) Passat, which shared its platform with the second-generation "Typ 81" Audi 80/Audi 90 (the A4 is the successor to the Audi 80 line). 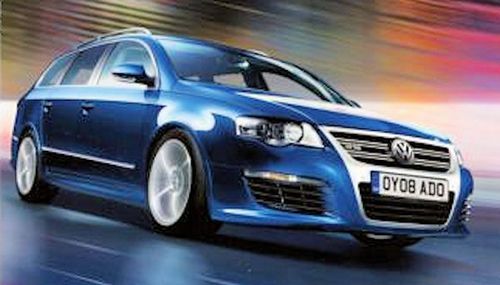 The B6 Passat was first displayed at the Geneva Motor Show in March 2005, and launched in Europe in the summer of 2005. Unlike its predecessor, the B6 Passat no longer shared its platform with Audi's equivalent model (the Audi A4). Based on a modified version of the Mk5 Golf's PQ46 platform, the B6 featured a transverse rather than longitundinal engine layout of its predecessor, like the previous B3 and B4 generations, which were related to the A2 (Golf) platform.

The CC ("Comfort Coupé")is a 4-door "coupé" version of the Passat. It debuted at the 2008 North American International Auto Show in Detroit. Originally aimed at competing with the similarly styled Mercedes CLS, the Passat CC intends to be more stylish and luxurious than the previously released Passat B6. In the U.S., the name "Passat" was dropped, and the car is being sold as "CC".Some options specific to the CC include hands-free parking, lane-departure prevention, intelligent cruise control, and adaptive suspension. Engines offered in the CC mirror those of the regular Passat, with options of the base 2.0-liter turbocharged four-cylinder, or the optional 3.6-liter V-6, which includes 4-motion all-wheel drive. Although the CC is marketed as a more luxurious Passat B6, it comes in with a lower price tag. While the MSRP of a Passat B6 is $28,300, the CC comes with a base price of $27,100.

The B6 Passat was facelifted by Klaus Bischoff and Walter de Silva,and was unveiled at the Paris Motor Show in September 2010. Although designated "B7", the car is not an all-new model. The facelift resulted in new external body panels except for the roof and glasshouse, with the prominent changes to the grille and headlights. Overall height and width dimensions are unchanged from the B6 Passat, while length increases by 4 mm. New features include a fatigue detection system and an automatic "city emergency braking" system. It arrived at dealerships in mid-November 2010.

In October 2011 Volkswagen presented at the 2011 Tokyo Motor Show the Passat Alltrack. The Passat Alltrack bridges the gap between the passenger VW range and the SUV range comprising the Tiguan and Touareg.