The Volkswagen Phaeton /ˈfeɪtən/ FAY-tən is a full-size (F-segment in Europe) luxury sedan/saloon manufactured by German automaker Volkswagen, described by Volkswagen as their "premium class" vehicle. Introduced at the 2002 Geneva Motor Show, the Phaeton is marketed worldwide.

The name Phaeton derives from Phaëton, the son of Phoebus (or Helios) in Greek mythology, by way of the phaeton auto body style and the type of horse-drawn carriage that preceded it.

The Phaeton was conceived by Ferdinand Piëch, then chairman of Volkswagen Group Piëch wanted Volkswagen engineers to create a car that would surpass the German prestige market leaders, Mercedes-Benz and BMW. The decision to release the Phaeton was, in part, a response to Mercedes' decision to compete directly with Volkswagen in the European marketplace with the low-cost A-Class. It was also intended to support the Volkswagen brand image, since the most expensive versions of lesser models, such as the Golf GTI, were starting to cost almost as much as equivalently-sized prestige brands. Although the Volkswagen group already has a direct competitor in the full-sized luxury segment, the Audi A8, the Phaeton is intended to be more of a comfort-oriented limousine like the Mercedes-Benz S-Class and Lexus LS, while the Audi A8 and BMW 7 Series are more sport-oriented.

Initial development of the Phaeton, given the internal project code VW611, began with Piëch giving his engineers a list of ten parameters the car needed to fulfill. Most of these specifications were not made known to the public, but a number of them were told to automotive reporters. One of them was that the Phaeton should be capable of being driven all day at 300 kilometres per hour (186 mph) with an exterior temperature of 50 °C (122 °F) whilst maintaining the interior temperature at 22 °C (72 °F). Piëch requested this even though the Phaeton's top speed was electronically limited to 250 kilometres per hour (155.3 mph). Another requirement was that the car should possess torsional rigidity of 37,000 N·m/degree.

The Phaeton's platform, the Volkswagen Group D1 platform, is shared with the Bentley Continental GT and Bentley Continental Flying Spur. Certain systems, such as the automatic transmission and some engines, are also shared with the Audi A8. The D1 is a stand-alone steel platform specifically developed for the Phaeton and Bentley Continental and not to be confused with Audi's all-aluminium D3 platform. Compared to the Audi A8L 4.2 FSI quattro, the Phaeton is 545 pounds heavier but is still competitive with the lighter A8 in most driving tests, due to the Phaeton's increased engine power (335 hp versus 330) and a shorter axle ratio (3.65:1 versus 3.32). However, the weight gives the Phaeton considerably worse acceleration and poorer fuel economy compared to the A8.

As of 2011[update], the Phaeton has the longest wheelbase in the Volkswagen passenger car line. 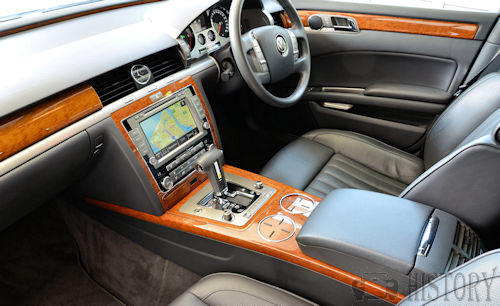 It is a concept car with lengthened body for 6 passengers. It included W12 cylinder engine, and a reinforced chassis, 6-speed Tiptronic automatic transmission, individual climate control for each passenger, front and rear wine coolers, a minibar, multi-color mood lighting, a cigar humidor, two 17-inch monitors, DVD changer in the trunk, 2nd DVD player in the back cabin, and a Bluetooth-enabled computer with a broadband connection.

The vehicle was unveiled in 2005 Middle East International Motor Show.

The Phaeton is hand-assembled in an eco-friendly factory with a glass exterior, the Transparent Factory (German: Gläserne Manufaktur) in Dresden, Germany. This factory also assembled Bentley Continental Flying Spur vehicles destined for the European market until October 2006, when all assembly of the Bentley products was transferred to Crewe, England.

The Phaeton body is fabricated and painted at the Volkswagen works at Zwickau, Germany, and the completed bodies are transported approximately 100 km by special road transport vehicles to the main factory. Most Phaeton engines, the W12 being the notable exception, are built at the VW/Porsche/Audi engine plant in Győr, Hungary.

The vehicle was unveiled in 2010 Beijing International Automotive Exhibition.

The basic equipment across all versions of the Volkswagen Phaeton

The 2011 model year car gets a new front fascia to more closely resemble the current Volkswagen styling direction, first seen on the Golf Mk VI. (Note: the front will not be in black like the Golf, but in chrome.) This includes new LED running lights, bi-xenon headlights and a new bumper with LED fog lights. The rear LED clusters have been altered as well to mimic those found on the recently facelifted Touran, Sharan, and new Touareg. The interior benefits from some new technologies as well, but retains the 2009 MY layout. The Phaeton will have two different versions: a normal wheelbase and long wheelbase. The Phaeton will also offer a five-seat layout or an optional four-seat layout. In the five-seat version, the front seats can be adjusted 12 ways. It will have standard features like all-wheel drive, air suspension, and four-zone automatic climate control. It will also have a multifunction steering wheel that can be ordered in leather or wood-leather.