The Volkswagen B6 Passat debuted at the Geneva Motor Show in March 2006, and launched in Europe in the summer of 2006. The B6 Passat no longer shared its platform with Audi's equivalent model (the Audi A4), and is instead based on a long-wheelbase version of the platform used by the fifth-generation Golf (called Rabbit in the United States & Canada), and its sedan equivalent, the fifth-generation Volkswagen Jetta, and therefore seeing a return to a transverse engine compared to the longitundinal layout of its predecessor. Confusingly, although this model is referred to as the "B6" (or "Typ 3C") Passat it has minimal commonality with the "B6" (Typ 8E) Audi A4, which was based on its own unique platform when it was launched in 2001. 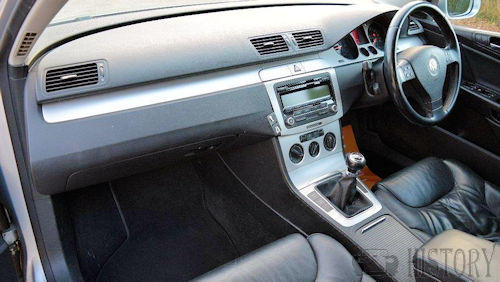 On the four-wheel drive version, called 4motion, the transverse-engine platform dictated a switch from the Torsen centre differential of the B5, to the Haldex Traction multi-plate clutch. The change to the Haldex system also changes the handling closer to a front-wheel drive car, with better fuel economy claimed. Compared to the Torsen, the Haldex can direct torque more unequally to the front wheels (from 100:0 to 50:50 front-to-rear bias), thus providing a wider bias range than the 75:25 to 25:75 of the B5 Passat. Haldex is a reactive-type system, behaving as a front-wheel-drive vehicle until slippage is detected, at which point up to a maximum of 50% of the torque can be transmitted to the rear axle. See the Audi-related quattro (four wheel drive system) article for more information.

In China, the PQ46 Passat was released by FAW-Volkswagen (FAW-VWVolkswagen Group China subsidiary FAW-Volkswagen (FAW-VW) as the Magotan, after Volkswagen's other joint venture in China, Shanghai Volkswagen Automotive(SVW) had decided to continue using the B5 platform for the Passat and the Passat Lingyu (long-wheelbase Passat). Since August 2010 the wagon version of Passat B6 will be offered in China, which is a fully imported model. But this car is simply called Volkswagen Variant in China, in order not to refer the name "Passat" or "Magotan".

It is a concept vehicle capable of using natural gas or conventional petrol fuel. It includes a 1.4-litre TSI 150 PS engine featuring both a supercharger and a turbocharger operating sequentially, 22 kg capacity natural gas tank mounted beneath the boot floor and 31-litre petrol tank.

Production version went on sale at the end of 2008 in mainland Europe, for saloon and estate versions of the Passat.

In July 2008, Volkswagen launched the R36 version in the Middle East.

The CC ("Comfort Coupé") is a 4-door "coupé" version of the Passat. It debuted at the 2008 North American International Auto Show in Detroit. Originally aimed at competing with the similarly styled Mercedes CLS, the Passat CC intends to be more stylish and luxurious than the previously released Passat B6. In the U.S., the name "Passat" was dropped, and the car is being sold as "CC" Some options specific to the CC include hands-free parking, lane-departure prevention, intelligent cruise control, and adaptive suspension. Engines offered in the CC mirror those of the regular Passat, with options of the base 2.0 liter turbocharged four-cylinder, or the optional 3.6 liter V-6, which includes 4-motion all wheel drive. Although the CC is marketed as a more luxurious Passat B6, it comes in with a lower price tag. While the MSRP of a Passat B6 is $28,300, the CC comes with a base price of $27,100.

As in North America, the Passat CC will from the 2012 facelift drop the Passat name in Europe and be called Volkswagen CC.

The B6 Passat was facelifted by Klaus Bischoff and Walter de Silva, and was unveiled at the Paris Motor Show in September 2010. Although designated "B7", the car is not an all-new model. The facelift resulted in new external body panels except for the roof and glasshouse, with the prominent changes to the grille and headlights. Overall height and width dimensions are unchanged from the B6 Passat, while length increases by 4 mm. New features include a fatigue detection system and an automatic "city emergency braking" system. It arrived at dealerships in mid-November 2010.

The interior featured minor detail changes from the B6, although the basic dashboard design remain unchanged.

In India, the B6 version is supposed to be replaced with B7 version. Also the FAW-VW-built Magotan will also be replaced by a long-wheelbase version of the Passat B7. The new model will be exclusive to the Indian market, and at least 100 mm longer than the European B7. The Indian market is also likely to get the B7 which appears to be only a facelift of B6 and not a new platform.

In China, the FAW-VW-built Magotan will also be replaced by a long-wheelbase version of the Passat B7. The new model will be exclusive to the Chinese market, and at least 100 mm longer than the European B7.Engines available for Magotan B7L are ranging from 1.4T, 1.8T to 2.0T, a special-developed EA390 3.0L VR6 FSI engine is opted for the top model.

In October 2011 Volkswagen presented at the 2011 Tokyo Motor Show the Passat Alltrack. The Passat Alltrack bridges the gap between the passenger VW range and the SUV range comprising the Tiguan and Touareg.

The Passat Alltrack has raised ground clearance from 135 to 165 mm which improves approach angle from 13.5 to 16 degrees, departure angle from 11.9 to 13.6 degrees and ramp angle from 9.5 to 12.8 degrees when compared to the standard Passat wagon. Passat Alltrack is the only VW in the passenger range to offer 4Motion with off road driving programme, the off road system works in conjunction with the ABS, electronic differential lock (EDL), DSG & hill descent assist system to control the vehicle in an off road expedition.

The engine range of the Passat Alltrack comprise of two 2.0L TDI with outputs of 103 kW/140 hp & 125 kW/170 hp and two petrol engines, 1.8L producing 118 kW/160 hp and 2.0L TSI producing 155 kW/207 hp. The TDI models come standard with BlueMotion Technology packages with Stop/Start system and battery regeneration mode for recovering braking energy. The two lesser powered engine variants 2.0L TDI and 1.8L TSI are only available in front wheel drive format with a manual 6 speed transmission. The rest of the range with 4Motion has a 6 speed DSG automated manual transmission, except the 2.0L TDI with 103 kW/140 hp has an option of 6 speed manual.

In 2012 at the New York Auto Show, VW showed a Passat Alltrack with 2.0L TDI 125 kW/170 hp under Alltrack Concept nameplate to gauge response for a future market in the offroad wagon segment. 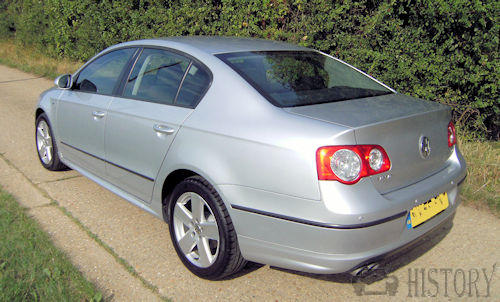