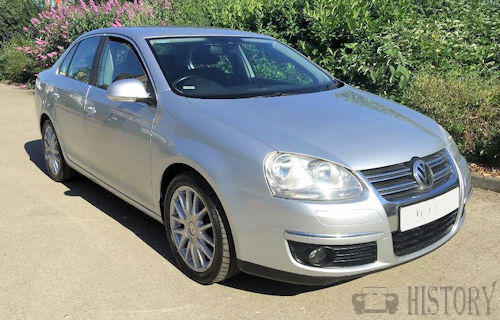 The fifth generation debuted at the Los Angeles Auto Show on 5 January 2005. It was only the second Volkswagen product to make its world debut at a U.S.

The fifth generation car has the widest variety of names of any generation. In most countries, it is referred to as the Jetta. Exceptions to this include "Bora" in Mexico and Colombia, "Vento" in Argentina and Chile, and "Sagitar" in China.The Mark 5 is 170 millimetres (6.7 in) longer, 30 millimetres (1.2 in) wider, and has a 70 millimetres (2.8 in) longer wheelbase than the previous iteration. Interior room has increased from 2.46 cubic metres (87 cu ft) to 2.58 cubic metres (91 cu ft). In particular, rear legroom was increased by 65 millimetres (2.6 in) over the fourth generation. Luggage compartment volume is up to 453 litres (16 cu ft). One major change is the introduction of the first multi-link independent rear suspension in a Jetta. The design of the rear suspension is nearly identical to the one found in the Ford Focus. Volkswagen reportedly hired engineers from Ford who designed the suspension on the Focus.

Styling reflects a new direction for the Volkswagen brand, with a new chrome front grille, first seen on the Golf Mk5 R32, which has spread to other models. Some critics appreciated the new styling, whilst others dismissed it as just as bland as the 4th generation.

The body of the fifth generation uses extensive high strength steel, and use of laser welding is up from 5% to 35% of body parts.This results in double-digit increases in both dynamic and torsional rigidity. Other body innovations include an impact-absorbing front bumper which yields slightly in the event of a collision with a pedestrian, reducing the chance of injury. A new door design allows just the outer panel to be removed and replaced if damaged, rather than the entire door Safety was again enhanced with many active and passive features available or standard. These included side curtain airbags, seat-mounted rear side airbags, new generation Electronic Stability Programme with Anti-Slip Regulation and Brake assist, as well as active head restraints. A Direct-Shift Gearbox (DSG) transmission, available dual-zone automatic climate control, and electro-mechanical power steering are also new innovations.

The fifth generation car has a totally redesigned electrical system. Control modules are used for everything from the radio to the powertrain, transmitting over Controller Area Network (CAN) buses. Transmission of signals is done digitally at 500 kilobits per second, which reduces the number of wires needed, and thus reduces the chance for faults. Cars equipped with halogen headlamps have a 'VW' logo integrated into the bulb shield. In most of the world, the rear lights use light-emitting diodes (LEDs). However, in North America, standard filament bulbs with a different design are used, to comply with FMVSS 108.

The internal combustion engines available are dependent on the destination market. In Europe, a range of the new generation Fuel Stratified Injection (FSI) engines are available. Additionally in that market, the car can be had with an engine known as the 'Twincharger' (TSI). This 1.4 litre petrol engine combines turbo- and supercharging, to make a small but powerful engine with low fuel consumption.The Jetta available in the Americas and the Middle East, is powered by a 2.5-litre 5-cylinder 20-valve engine in most trims. This engine shares its cylinder head design with the V10 engine found in the Lamborghini Gallardo.

When the Mark 5 Jetta was introduced, the Turbocharged Direct Injection (TDI) diesel engine was not offered in five U.S. States due to the tight emission standards promulgated by the California Air Resources Board. In addition to California, four other states adopted the more stringent California standards. Where it was available, it fell into the least-restrictive emission category. That category was removed in 2007, prompting the diesel Jetta to be unavailable for more than a year until the introduction of a new common rail diesel engine, which appeared in August 2008. The introduction was delayed for approximately six months due to technical issues with the new emissions control system.The TDI Clean Diesel engine is rated 140 metric horsepower (103 kW; 138 bhp), and uses advanced features such as a diesel particulate filter and NOx-storage catalyst (vs. AdBlue) to reduce NOx in order to qualify as a Tier II Bin 5 vehicle (equivalent to California's LEV II rating), and thereby allowing it to be sold in all 50 U.S. states. AdBlue (urea injection fluid) is not required, further reducing maintenance requirements.

In the U.S., it was reported in August 2010 that the National Highway Traffic Safety Administration (NHTSA) was investigating 37,889 2009 Jetta TDI over stalling problem. There were complaints to the agency about the Jettas went into limp-home mode and then stalled almost immediately while being driven. Motor Trend reported that there were also complaints about premature failures of its high-pressure fuel pump.

The VW Jetta received the maximum 5 stars in the China NCAP crash tests.

At the 2007 New York International Auto Show, Volkswagen unveiled a station wagon version dubbed the Jetta SportWagen.The Jetta wagon was not sold for the 2006, 2007 and 2008 model years in the United States.

The SportWagen has 930 litres (33 cu ft) of cargo space with the rear seats upright, or 1,894 litres (66.9 cu ft) with the seats folded. One unique option is a panoramic sunroof. The available roof is a full 1.18 square metres (12.7 sq ft) in area, giving both front and rear seat passengers an expansive view of the sky.

The 2010-model Jetta SportWagen is based on the fifth-generation Volkswagen Golf, despite the sixth-generation front facelift.

It can be purchased with either a 6-speed Manual or DSG transmission (DSG includes paddle shifters), and a "Thunderbunny" body kit is optional (and available from VW only on the Cup edition).

The vehicle was unveiled in 2008 SEMA show. The production version went on sale in January 2010 with a base MSRP of $24,990USD (not including destination or options). 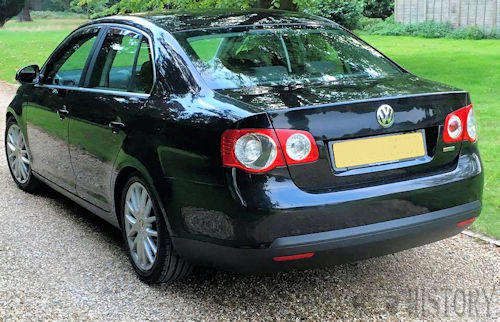