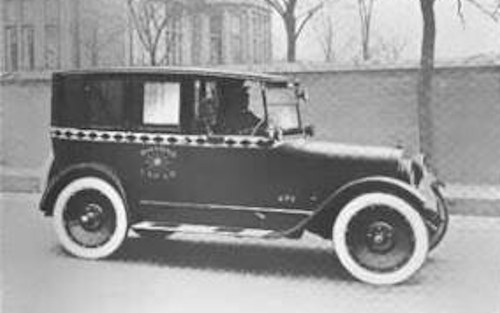 Diamond Taxicab Company was an American manufacturer of taxi automobiles in the 1920s. The brand name was Diamond.

The company was founded in 1922 in the State of New York as a joint venture of Gray Motors Corporation, Apex Motor Corporation and Guy Disc Valve Engine Corporation. The headquarters was in Detroit (Michigan). President of the Society was the US Senator from Oklahoma and Attorney Robert L. Owen (1856-1947). The initiative was initiated by Nat D. Jacoby, head of the New York taxi company Black and White Cab Company. Significant participants included Frank L. Klingensmith, Frank F. Beall and HT Hanover.  Other board members were the engineer OD Heaven Rich as secretary and Fred H. Lewis, president of Lewis Spring & Axle Company. The secured Diamond Taxicab Co. a suitable area.  First, the planned output was 10 vehicles per day.

1922 was a first partial order over 250 Black and White -Taxis one.  was allowed production initially at Elcar Motor Car Company in Elkhart (Indiana). The order of Black and White amounted to a total of 1000 taxis.  Jacoby had now taken control of the company and also launched Diamond. Changes in the Management Board were not noted. Obviously, Jacoby planned a far-reaching reorganization with the founding of a parent company, under the roof of diamond taxi and bus transport companies should be organized. This concept should be transferred to all major US cities. Similarly, the major competitors went Checker Cab and Yellow Cab before dealing with the Checker Cab Manufacturing Company and the Yellow Cab & Coach Manufacturing Company each had their own production facilities secured. However, there were different views, because of Gray Motor such intentions were denied.  Much resistance but it might not have been, because at Apex Motor 's financial situation deteriorated rapidly, leading to its closure early 1,923th Previously, Jacoby had acquired the taxi prototype, including design plans and distribution rights.

The transfer of the first Diamond -Taxis was around August 1922. As a result of the new plans, the taxi was reworked. It was designed more easily and got a smaller engine. In particular, it was designed for two instead of five passengers. Jacoby had found that taxis rarely carried more than two passengers at the same time and expected these measures to lead to a drastic reduction in operating costs, which should largely be passed on to passengers. The fare should sink so instead of the usual US 30-40 cents per mile to 10 cents.  The vehicle now from the Driggs-Seabury Ordnance Corporation in New Haven (Connecticut) are assembled and no longer Diamond. But after Driggs-Seabury was in financial difficulties in November 1923, this company lost the taxi order to the Elcar Motor Car Company in Elkhart (Indiana), which already produced their own taxis under the brand name Elfay , Martel and Royal Martel.

The Diamond Taxi was not made exclusively for Black and White. Like the larger competitors Checker and Yellow with her as franchisors-built Checker Cab and Yellow Jacoby should ensure only a basic set of orders. It seems that the home market was saturated. Plans to manufacture vehicles for eastern regions such as Baltimore, Boston, Philadelphia and Washington, DC have not been implemented. Until the final closure in 1925, Diamond made his own taxi. The production volume amounted to 1000 vehicles [1] [3], whereby it is unclear how many of them were produced for Black and White. That it was more than 250 copies of the first order is unlikely. In January 1925, Klingensmith left Gray Motor, which was about to go bankrupt. That was also the end for Diamond.

AM Graffis, chief engineer at Elcar Motor Company, constructed the first one.  The prototype this was at Apex Motor.  This taxi was typical of the time as a Town - Landaulet designed with open chauffeur compartment and a hood over the back seat. The sheet metal parts were "removable" for easy replacement after an accident can, indicating a bolted body. This is described as "wide" and "low" with "little glass". Jacoby as a connoisseur of the taxi market expressed his wishes. So, the windows were actually smaller than usual, in order to grant the passengers more discretion. He also insisted that the discs be easy to replace. The pads were removed during the morning cleaning. It was a selling price between US $ 1900, - and 1950, a spare wheel, lighting, battery, magneto, starter The engine was a four-cylinder from Herschell-Spillman. The second vehicle is the version adopted by Driggs and the third is a further development of the first, which originated at Elcar.