Automotive manufacturer of Bremen , Indiana,United States from 1969 to 1988. 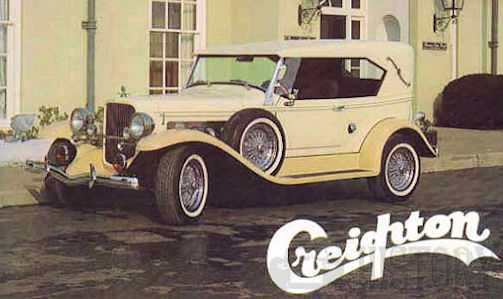 Alvin D. Hildenbrand founded the company in Bremen in 1969 in Indiana with the production of automobiles and kit cars .The brand name was Bremen . By 1988 ended the production. They also imported vehicles from Adamo , GlasPac , Lafer , Puma and Ventura from Brazil.

The model Sebring was similar to the Sterling of California Component Cars , which corresponded to the British Nova . A special feature of this model was the hinged roof instead of side doors. Usually formed a chassis of the VW Beetle 's base. However, Bremen also offered a tubular frame and a V6 engine . The most powerful version had a V6 engine with 3800 cc displacement and a turbocharger .

The Creighton was a convertible in the style of the 1930s with a 105" wheelbase. The engines came from the 2300 cc.4 cylinder Ford Mustang II .

The Mini Mark was also a 1930s-style vehicle, but cheaper because it was built on a VW basis.

The Citation was a VW buggy whose front was similar to the Ford Model T.

The maxi-taxi was the extended version of the citation .