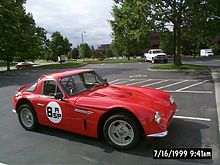 The TVR Griffith Series 400 is a 2-door coupe sports car produced by Griffith Automobile Corporation between 1964 and 1967. It is the successor to the TVR Griffith 200, featuring improved cooling via a larger radiator with twin electric fans, redesigned rear suspension, and a redesigned rear with better visibility and the round taillights sourced from the Ford Cortina Mark I.

The standard engine in the 400 was the more powerful Ford 289 'HiPo' Windsor engine w/271 hp that was available in the Series 200 as an option. The 400 weighed a few more pounds than the 200 due mostly to the new Salisbury independent differential that gave it a higher gear ratio providing it with a higher top speed.

As the Series 400 cars were being produced in early 1965, the entire east coast of the US was crippled by a prolonged dock strike. This not only caused a disruption in the supply of the series 400 bodies that were being shipped from TVR in Blackpool, UK, it also caused a delay in the shipment of the newer body design of the Series 600. Frank Reisner, whose Intermeccanica body works in Turin, Italy, was building the new steel bodied Griffith, was also unable to have the bodies shipped. Jack Griffith attempted to bring his car to the public by having these bodies airlifted across the Atlantic.

With only 59 copies of the 400 and 10 600s off the assembly line at the Griffith factory in Plainview, Long Island, N.Y, USA, the company was dissolved.It's to be noted that Grantur Ltd. of England designed the independent suspension for the TVR automobiles which later became the Griffith 200 and 400. What makes the Griffith 400 a Cobra killer is the unequal wishbone suspension on all four corners and weighing a couple of hundred pounds less than a Cobra. Many people are not aware of the sophisticated Formula One type of suspension system on the Griffith's. Furthermore, with a center of gravity below the ground it is basically a legal race car for the road. As stated above some people refer to the Griffith 400 with its original kamm tail effect as the King of the middle sixties A Production sportscars. See: 2011 Silverstone;Gentlemen Drivers;UK and one will see one blue Griffith 400 beat a host of Shelby AC Cobras,Jaguars,Aston Martins, Corvettes,Ferraris,and Porsches. It's to be noted that the Griffith 400's are so fast that they run the fastest of the qualifying times and usually are with the superfast Ford GT 40's. See: Six hour GT 40 race at 2011 SPA Francorchamp.

Others say that there were 203 1964 Griffith 200's built and that in 1965 there were 58 Griffith 400's built before the end of the Griffith tho a few cars were sold after that as later model year cars. In fact the car was very crude, very lighly built, very cramped inside, very hot and due to being designed originally for various English 4-cylinder engines of roughly 100 hp and then having an engine of more than double the power installed it just was a very crude car that made a fast race car - it had some racing success but had variable reliability. The Griffith was one of the many hibred European cars with American V8 power and some were more successful than others. See also the Iso Rivolta, Shelby AC Cobra, Sunbeam Tiger, Intermeccanica and later the DeTomaso Pantera and several others.

The references made to the Griffith are somewhat factual in performance and body fit but the following facts are part of the complete history of the Griffith Motorcar.

1: The engines used in the Griffith were Ford 289 ci Windsor engines, so called because they were produced in Windsor, Ontario, Canada. These excellent, lightweight engines were available in various displacements and degrees of tune in nearly every model car and truck that Ford built throughout the sixties, seventies, and eighties. The original Griffith, the Series 200, was named because the car was originally powered by a 200 horsepower engine that featured one 2-barrel carburetor, while the 225 hp or the legendary 271 hp 'HiPo' motors with their four barrel carbs were optional.

3: Though the Griffith was produced in a relatively small quantity, total production of the three series being 261, it would provide the hinge-pin for moving the TVR marque from that of a four-cylinder little British sport car to a very overpowered and superior competition vehicle, a reputation that has lasted into the racing records of the 21st century. Reference The Griffith Years by Mike Mooney, Griffith factory test driver