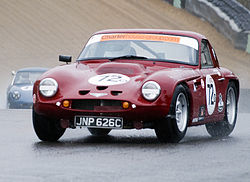 Jack Griffith came up with the idea for the car in 1964, and secured rights to market the cars in the US. Griffith ran a car repair workshop in the US for patrons such as Gerry Sagerman and Mark Donohue who had both driven a TVR Grantura at Sebring International Raceway in 1962. The concept for the Griffith Series 200 originated during a dinner with Carroll Shelby, where Griffith declared he could build a car that could outperform an AC Cobra.

Griffith first attempt was to put the Ford V8 engine from Mark Donohue's AC Cobra into a TVR Grantua. While this did not work, the idea prompted further conversations. Griffith wanted TVR to supply him with modified TVR Grantura chassis, without an engine or transmission, and TVR complied with his request.

In an effort to get the engine and gearbox to fit, some chassis triangulation was removed compared to that of the Grantura Mk 3, and various parts of the chassis were simply hammered until the drivetrain fitted. The brakes were not upgraded either, although slightly wider 185 section tyres were added.

The immense power, short wheelbase, and light weight of the cars allegedly made them difficult to handle. Despite its performance, just 192 Griffith 200s were made in the US, before it was superseded by the TVR Griffith 400 (Griffith Series 400).