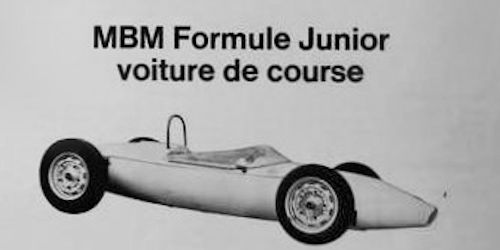 MBM was a Swiss automobile manufacturer, which produced in the early 1960s in small numbers racing cars and in individual copies also road sports cars. The company, led by Peter Monteverdi , is the forerunner of the sports car manufacturer Automobile Monteverdi , which from 1967 built coupes, sedans and SUVs of the upper class for about one and a half decades.

Peter Monteverdi owned in Binningen in the Swiss canton of Basel-Landschaft, a company that developed in the 1960s from a repair shop for trucks to a thriving commercial operation with representations of various European sports car brands. Monteverdi was temporarily licensee for Ferrari , Lancia , Bentley , Jensen and BMW.

Even as a teenager Peter Monteverdi was interested in motorsport. In the 1950s he participated as a racing driver in various events of smaller classes; Overall, he denied by his own account about 80 races. At the same time he began to develop his own racing cars and to have them manufactured in his factory, which he marketed under the name MBM. Some of the designs drove Monteverdi even at motorsport events. In the engine area, he had different partners, who were also considered at times in naming the company.

After a five-year break, Monteverdi 1967, the production of vehicles again, but he changed the market segment: Now emerged upper-class cars with large-volume American engines that were designed as Gran Tourismo vehicles. Initially, Monteverdi also considered marketing it under the name MBM; corresponding sales brochures were printed at the end of 1967. Shortly before the start of series production, the brand name was then switched to Monteverdi . The production of automobiles ended in the early 1980s.

The company traded under the name MBM automobiles mostly. The acronym MBM had different meanings in the course of the existence of the mark. Initially, MBM stood for M onteverdi B asel M antzel, with the last link referring to Albrecht-Wolf Mantzel , a German engineer known for tuning DKW engines and occasionally supplying MBM with machined engines. After Monteverdi had separated from Mantzel, he temporarily moved engines from the German racing driver Gerhard Mitter, who in turn tuned DKW engines. In this short phase, the second M in the brand name for Mitter. When Monteverdi finally turned to other engine manufacturers, MBM became the acronym for M onteverdi B asel M otors.

The focus of the company was on the production of racing sports cars. According to Monteverdi, MBM produced a total of 18 vehicles of different specifications from 1960 to 1962

The first race cars bearing the MBM name were vehicles for Formula Junior . In 1960 and 1961, following a prototype called "Bamosa", four different models, technically related and named types A, B, C and D, appeared. Contemporary race reports and entry lists usually do not pick up this differentiation; they speak for the emergency vehicles only from MBM or MBM-DKW.

The prototype was called Bamosa. She was a euphemism for Ba rarely Mo nteverdi- Sa uter and contained an indication of the temporary contribution from the Swiss racecar constructors Sauter . After initial plans Kurt Sauters company was to supply the bodies for the designed by Peter Monteverdi racing car.

The car had a built at Monteverdi lattice frame and used various mass-produced components: The front suspension was about taken over by Volkswagen , the steering came from a Renault 4CV . Sauter formed a body made of aluminum, which is in the style of contemporary Lotus oriented -models. As a drive was used by Mantzel tuned three-cylinder engine DKW, which made 65 hp. Peter Monteverdi and Hans Herrmann tested the Bamosa in December 1959 at the Hockenheimring, The chassis proved unstable; the car was very twisty. Since Sauter held the technical solutions for Monteverdi's not competitive, the Bamosa was abandoned following the Hockenheim test.Sauter revised the chassis and brought it with unchanged, the Bamosa appropriate body later under its own name at the start.

During the year 1960, Peter Monteverdi designed a racing car in Formula 1 configuration. This was basically a slightly enlarged Formula Junior car, in which a four-cylinder boxer engine of the Porsche 718 (RSK) had been installed. Since Porsche had refused to supply an engine, Monteverdi bought a complete car from Porsche, took out the engine and installed it in his own vehicle.

In 1961, Peter Monteverdi himself took part in a number of Swiss mountain races with his Formula 1 vehicle. In 1961, Monteverdi announced the Grand Prix of the Solitude , a car race near Stuttgart , which was this year for the first time for Formula 1 vehicles tendered. Monteverdi qualified for this last. In the race he came only two laps wide, then he had to give up with engine problems.

In a round race at the Hockenheimring in October 1961, which took place in the run-up to the Grand Prix of Germany , Monteverdi crashed hard. The car was badly damaged. Monteverdi then decided to give up racing immediately. According to some reports, the wreckage of his Formula 1 car was embedded in the basement of his workshop in Basel. The MBM Formula 1 car currently being exhibited in the Monteverdi Museum is a reconstruction.

In 1990 , after he had already abandoned the production of street cars, Peter Monteverdi appeared again in the Formula 1 At the beginning of the season he had taken over the British team Onyx and led him for almost half a year under the name Onyx-Monteverdi (later Monteverdi ).

Before the founding of Automobile Monteverdi in 1967, Peter Monteverdi produced very few street cars. The first designed by him sports car was a coupe based on the Ferrari 750 Monza , which had a fixed roof and gullwing doors . The car was just as unique as the 1960 MBM Sport. The MBM Sport was a Barchetta with a tubular frame and an engine from OSCA , whose whereabouts are unknown.

Monteverdi had bigger ambitions with the 1962 presented MBM Turismo. It was a small closed coupe with tubular frame and a plastic body. The drive was a Ford Anglia engine, which should have made 85 hp. The maximum speed is said to have been 185 km / h. While Peter Monteverdi called the Tourismo a self-construction, automotive historians now believe it was a replica of Heron Plastics' European coupe .  A planned series production did not materialize. 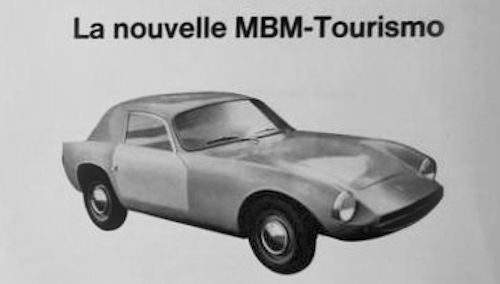