By 1967 Rootes's "Arrow" range was ready. As well as the Hillman Hunter, the range also included a new generation of Sunbeam Rapiers, with fastback coupé bodies and a sporty image. Like the series models, it was a 2-door pillarless hardtop.

The Arrow Rapier – or Fastback, as it came to be known – launched in October 1967,was a smart four-seat coupé based on the chassis of the Hillman Hunter Estate. It was said to bear a resemblance to the contemporary Plymouth Barracuda, a product from Chrysler who by now had a considerable stake in Rootes. However, Rapier stylist Roy Axe insisted that this was not the case. Although the Rapier used the tail lamps and rear valance from the Hunter Estate, the rest of its superstructure was unique.

The Rapier used the Rootes four cylinder, 5-bearing 1725 cc engine, which was tilted slightly to the right to enable a lower bonnet line, in common with the other Arrow models. With its twin Stromberg 150CD carburettors the engine produced 88 bhp (net) at 5200 rpm. Overdrive was standard with the manual gearbox, and Borg-Warner automatic transmission was an optional extra.

The Fastback Rapier continued almost unchanged until 1976, when it was discontinued without replacement. During its lifetime it formed the basis for the more powerful Sunbeam Rapier H120, introduced in October 1968 and identifiable by its boot-lid spoiler and polished sill covers: it shared its Holbay Engineering-tuned 110 bhp engine (with twin Weber carburettors) with the Hillman Hunter GLS. The Rapier was also the basis for the slightly cheaper but similarly bodied, single-carburettor Sunbeam Alpine Fastback introduced in October 1969.Rapier running gear (though not the estate chassis) was also used in the Humber Sceptre, Hillman GT and Hillman Hunter GT models from the Arrow range.

The Sunbeam Alpine Fastback, introduced for 1970, was essentially a Rapier with a simplified specification, developed to plug a gap in the Arrow range above the Singer Vogue. It used the same 1725 cc engine as the Hillman Hunter which, fitted with a single Stromberg 150CD carburettor, developed 74 bhp (net) at 5500 rpm. Transmission options included overdrive on cars with a manual gearbox or a Borg-Warner automatic transmission.

The Alpine, though well equipped, was less sporty in style than the Rapier. It had a wooden dashboard with fewer instruments, instead of the Rapier's cowled plastic one, and wood instead of metal on the transmission tunnel; subjectively looking more luxurious rather than less sporty. There were also different wheel trims, no aluminium sill finishers (nor the polished ones of the H120) and no vinyl trim on its C pillars. Above all at GBP1086 in the UK it was significantly cheaper than the GBP1200 Rapier.

The Fastback Alpine was discontinued in 1975, before the Rapier and H120.

To produce an even faster car than the Fastback Rapier, Rootes developed the H120. Based on the Rapier, the H120 had a more powerful version of the 1725 cc engine specially developed by Holbay Racing Engines. It produced 108 bhp (gross) at 5200 rpm and was fitted with a special cylinder head, high lift camshaft, tuned length four-branch exhaust manifold, special distributor and twin Weber 40DCOE carburetters. To enhance the driving experience, the H120 had a close ratio gearbox, a heavy duty overdrive and a high ratio rear axle. Automatic transmission was not an option.

To add to its sporty image, the H120 was given wider Rostyle wheels, broad side flashes, polished sill covers, a matt black radiator grille and a new boot lid incorporating a faired-in spoiler. To complete the package, H120 badges appeared on the front wings and in the centre of the grille.

The H120 was discontinued with the Fastback Rapier in 1976. 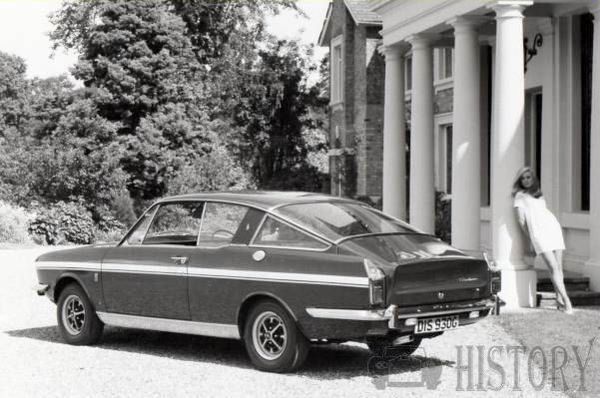