The Toyota 86 is a GT sports coupé developed jointly by Japanese automobile manufacturers Toyota and Subaru. It features a boxer engine, front-engine, rear-wheel-drive layout and 2+2 seating.

The 86 is sold under three different brands associated with its creators: Toyota (Toyota 86 in Japan, South Africa and Australia and Toyota GT86 in Europe and both names in New Zealand), Subaru (Subaru BRZ) and Scion (Scion FR-S for the United States and Canada).

"86" (pronounced "eight-six" or Hachi-Roku (ハチロク), more commonly pronounced as "eighty-six") refers to the Toyota AE86, a popular and well-regarded series of rear-wheel drive sports coupes and hatchbacks sold as the Toyota Sprinter Trueno and Toyota Corolla Levin from 1983 to 1987. The 86 has been described as the spiritual successor to the original AE86 by journalists as well as by Toyota itself. The heritage of the Toyota 86 can also be traced back to the Toyota 2000GT, Toyota's classic front engine, rear-drive sports car with a 2.0 litre engine along with the Toyota Sports 800, Toyota's first sports car. Coincidentally, the bore and stroke of the engine is also 86 mm.

The significance of the reference to the series AE86 was that both the Trueno and Levin of this series were the last with rear wheel drive; the following Sprinter Trueno and Corolla Levin series AE92 were released with front wheel drive thereafter. The previous Corolla Levin and Sprinter Trueno were performance enhanced trim packages of the Corolla and Sprinter for each generation of the Levin and Trueno; the current platform is unique and not related to the current Corolla or variants.

Originally, Subaru had rejected the plans of a rear wheel drive sports coupe, due to the rear wheel drive set up, and did not want to be part of the project, predominantly selling all wheel drive vehicles. However, Subaru did plan to provide the engine. Eventually the project came to a 6 month halt and was suspended before being revived again. Toyota eventually invited journalist and Subaru engineers to a vehicle test of its first 2008 prototype to show what it was capable of, which is believed to be one reason that Subaru changed their minds, being impressed with what they saw. This prototype led to the development of the FT-86 which was revealed in 2009.

It is expected that the Toyota and Subaru versions will be styled similarly on the outside, with the Subaru version getting different head and tail lights and a different hood. It has a 2.0 litre naturally aspirated boxer engine mated to a Subaru 6-speed manual transmission. The concept is fitted with brakes from Advics, a joint venture company formed between Aisin Seiki, Denso, Sumitomo Electric and Toyota.

According to chief engineer Tetsuya Tada, the unique shoujyouhi red colour was based on the colour of a Japanese monkey's backside

The FT-86 was first shown at the October 2009 Tokyo Motor Show and the first showing outside of Japan was at the March 2010 Geneva Motor Show.

It is a concept vehicle in which the production-ready Subaru BRZ was based on. It includes the 2.0-litre Subaru Boxer engine with Toyota's D-4S direct injection and port injection technology. It's often called the "BOXER Sports Car Architecture II" by Subaru. It has a hexagonal-design front air dam to distinguish itself from the Toyota 86, including HID projector-style headlamps, LED tail lights and 19-inch wheels.

The vehicle was unveiled at the 64th Frankfurt Motor Show.

The vehicle was unveiled in 2011 Los Angeles International Auto Show.

The vehicles were unveiled at the 2012 Tokyo Auto Salon.

Initially, the 86 and its sister models were featured with a Subaru-sourced naturally aspirated 2.0 L flat-4 boxer gasoline engine (Toyota engine code 4U-GSE, Subaru engine code FA20) that delivers 200 PS (147 kW; 197 hp) which includes a D-4S direct injection system from Toyota. The models were offered with two six-speed transmissions: a manual and an automatic with paddle shifters. The weight of the 86 is 1,180 to 1,250 kilograms (2,600 to 2,760 lb) depending on specification and equipment.

The Subaru BRZ is the second FR car from Subaru, after the Subaru 1500. "BRZ" stands for Boxer engine, Rear-wheel drive and Z being the ultimate letter.

Production version was originally planned to go on sale in 2012 spring.

The Subaru BRZ differs mainly in its front end, where the grille has an hexagonal shape versus an inverted trapezoid in the Toyota and Scion. The headlight design also differs between the two vehicles, the BRZ has wraparound LED parking lights where as the 86 has angled LED DRL's(Daytime Running Lights).

When questioned about differences between the Subaru BRZ and the Scion FR-S, Scion hinted at the FR-S being tuned more for sport, meaning the Subaru could have a softer ride than its Scion counterpart.

North American model comes in two trim packages, labeled as Premium and Limited. The Premium is the equivalent of the North American Scion FR-S with the addition of satellite navigation and HID headlights, while the Limited adds extra features such as heated seats and exterior mirrors, dual-zone climate control, and keyless ignition.

The Australian BRZ is placed between the GT and GTS 86 models and priced accordingly. It is equipped with the 17" wheels and larger brakes of the GTS, with the cloth seats of the GT as standard and leather as optional. Individual to the BRZ are its bi-xenon headlights with 2 pairs of LED daytime running lights, its front bumper design, external trim on the front quarter panels and interior dash trim in satin finish silver instead of the 86 GTS' carbon fibre look inserts. Where the BRZ falls behind the 86s is the standard audio system's headunit, a lower cost Toyota unit without Bluetooth capability and the exposed spare wheel in the boot. Mechanically the BRZ is differentiated from the 86 GTS by 10% stiffer spring rate of the front coils and dampening to match. Subaru suggests this is to give the car a more neutral cornering feel, as opposed to the 86s drift aspirations.

TMCA announced that from September 2012 production 86s built for Australia will no longer feature a full size spare tyre as standard equipment on the 86. This includes vehicles that were already ordered based on the original specification. TMCA have stated all 86 orders will be refunded if the purchaser does not wish to accept delivery of the vehicle in the new specification. Subaru have stated their vehicle will continue to be delivered with a full size spare tyre, but without a carpeted cover, which is available at extra cost.

It is a race car version of Subaru BRZ for the GT300 class of Super GT tournament.

The vehicle was unveiled in 2011 Tokyo Motor Show, followed by 2013 Tokyo Auto Salon.

The vehicle was unveiled in 2013 Tokyo Auto Salon.

It is a race car version of Subaru BRZ for the Toyota 86/Subaru BRZ one-make race, for Japan market. Built by RA Racing, it included:

The Toyota 86 was designed around a front-mounted boxer engine, rear-wheel drive configuration. The flat architecture of the boxer engine allows it to be mounted low, dropping the center of gravity down, resulting in sporty handling characteristics. The exterior design of the 86 was inspired by the Toyota 2000GT's extremely low-to-the-ground profile and long, sleek hood. The total concept of the car was most inspired by the Toyota AE86 which originally utilized lightweight design combined with modest engine power along with the front-engine, rear-wheel drive design that the 86 has. According to the 86's designers, "The goal was to create an authentic rear-wheel drive sports car with compelling style, exceptionally balanced performance and handling, flexible utility and surprising MPG." The car's design was inspired by previous Toyota sports cars including the Toyota Sports 800, Toyota 2000GT, and Toyota AE86. When asked about the TRD version of the car, the lead engineer Mr. Tada said "There is definitely going to be a more TRD oriented variant down the line. However any of the parts that would be standard on the TRD model will fit on your current Toyota 86 so there is no need to wait."

The Toyota-designated 4U-GSE engine is a naturally aspirated four-cylinder engine that uses Subaru's horizontally opposed boxer engine as well as Toyota's D-4S injection system which uses both direct and port injection. The engine has a 12.5:1 compression ratio and a bore and stroke of 86 mm (3.4 in) that results in 200 horsepower (149 kW; 203 PS) at 7,000 rpm for the FR-S and BRZ, and 197 horsepower (147 kW; 200 PS) for the Toyota variant, and 151 lb·ft (205 N·m) of torque at 6,000 rpm for all three vehicles. As part of the 86's low-weight design, the car utilizes an aluminum hood, a solid roof, and a trunk design as opposed to a hatchback.

The boxer engine sits as far back and as low as possible in the engine bay for a weight distribution of 53% in front and 47% in the rear. The low-sitting engine provides a lower center of gravity, allowing the engine to sit lower than the Nissan GTR and just 0.6 inches higher than the Lexus LFA.

The vehicles use 17 in (43 cm) diameter wheels, 7 in (18 cm) wide. The wheels are lightweight and wrapped in Michelin tyres (similar to those that are found on an upgraded Toyota Prius) but different diameter and width of 215/45. All three cars feature ventilated disc brakes at all four corners with two piston-opposed calipers in the front and single caliper design in the rear, and are equipped with MacPherson suspension in the front and double wishbones in the rear. 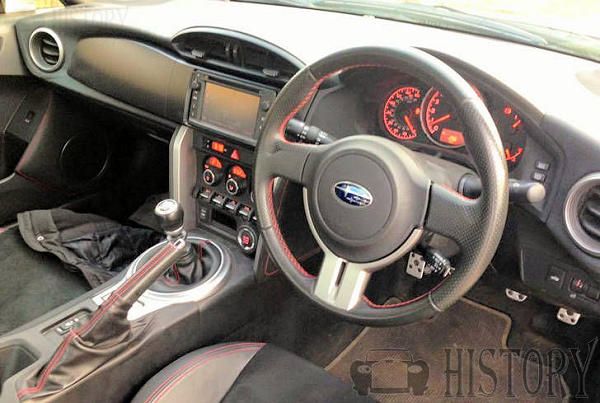 The interior features a 2+2 seating configuration, which utilizes low mounted front seats. The rear seats fold down enabling increased storage space for larger items.Three interior variations exist, the FR-S has cloth seats with all black interior trim that features a "T" or "faux carbon fiber" pattern, the e-brake boot is devoid of the red stitching found on the shift boot. The BRZ has two available interiors, one identical to the FR-S but with silver dash highlights (instead of the faux carbon), a red stitched e-brake boot, the red seat inserts are skipped, black gauge faces instead of white and a touch-screen navigation head unit; the second option upgrades to leather & alcantara heated seats, automatic HVAC controls, and a push-button start.

Toyota FT-86 was built in Subaru's Gunma factory in Japan.

Production of Subaru BRZ and Toyota 86 in Subaru Gunma Main Plant began in 2012, following the line-off ceremony at the plant.

Scion FR-S was used as the official vehicle of the 2013 Toyota Pro/Celebrity Race. 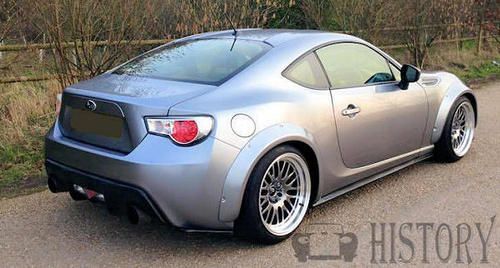