The Subaru Stella is a Japanese automobile produced by Subaru starting June 2006. The Stella is based on the same architecture as the Subaru R2. Has a 4-door hatchback, It can be considered as a direct replacement of the Subaru Pleo despite the fact the Pleo is still currently in production, and is Subaru's re-entry into the market segment dominated by the Suzuki Wagon R and the Daihatsu Move, hoping to recapture market share after the R2's less-than-expected sales performance. The Stella's dimensions are more parking structure friendly where vehicle stacking is utilized over the Pleo.

The name "Stella" is Italian for "star", a reference to the Subaru logo.

Due to the investment of Toyota, the future production status of the Stella is in question as Toyota has announced that Subaru kei cars will be replaced in model year 2010, with Toyota already selling a Toyota vehicle rebadged as a Subaru, currently called the Subaru Dex. The second-generation Stella is a rebadged Daihatsu Move, introduced in Japan May 11, 2011.

In June 2008 Subaru unveiled an electric concept vehicle combining the Stella platform with the electric drive from the Subaru R1e, which uses TEPCO lithium-ion batteries 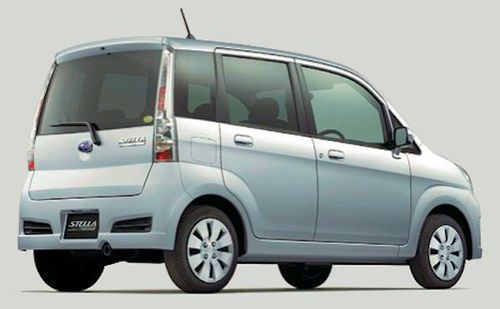