Traviq is usually referred to as Zafira A, as is customary for Opel models. Developed with the aid of Porsche, the Zafira was first shown in concept form at the 1997 Frankfurt Auto Show and entered series production in January 1999, with sales beginning in April.

The sale of the Zafira as a Subaru created a conflict with previously established Yanase Co., Ltd. retail dealerships, in that Yanase was already selling Opel products, like the Zafira. When production of the Traviq ended, Yanase continued to import Opel products into Japan until 2006.

The car was based on the same platform as the 1998 Astra G and shared much in common with that car. The Zafira A body was used in GM/Opel's concept hydrogen-powered fuel cell vehicle the HydroGen3. Offered with a series of petrol engines and initially a single diesel offering, the "X" engines were replaced by the newer "Z" engine generation in 2000.These featured variable intake manifolds and were able to meet Euro 3 emissions standards.

The Opel Zafira has seven seats arranged in three rows, the back row of which can be folded into the floor to create more space, individually or together, rather than requiring that the extra seats be physically removed from the vehicle. The system was named Flex 7. In TüV's ranking of the quality of three-year-old cars, the Zafira was by far the best Opel, only slightly behind the winning Ford Focus.

The Opel Zafira A was replaced by Zafira B in Europe, but was still sold in most other markets until 2012 (albet that its cousin the Chevrolet Astra was discontinued in 2011), except for Australia and New Zealand, where the model was cancelled altogether. The Zafira was sold in the Philippines from 2001 to 2005, being the last European-based Opel car to be sold in the Philippines after they stopped selling the Opel Astra in 2003.

The Zafira was sold in Japan from 2001 through 2004 as the Traviq, where it was cancelled and replaced later in 2008 by the Subaru Exiga - developed from the Subaru Legacy platform. According to Subaru, the name was a combination of the words "travel" and "quick", however, the word more closely resembles the English word "traffic".

Due to the exterior dimensions exceeding Japanese government regulations for vehicles defined as "compact", Japanese buyers were liable for additional taxes. The Traviq was originally only available with the bigger 2.2 litre engine, although a 1.8 L, lower-priced alternative was added in July 2003.The engines used were not Subaru supplied boxer engines, but were conventional in line units that were uncharasteristic to market recognized Subaru products, and all-wheel-drive technology was also not available. 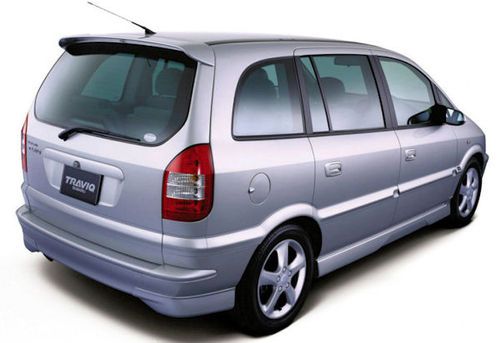