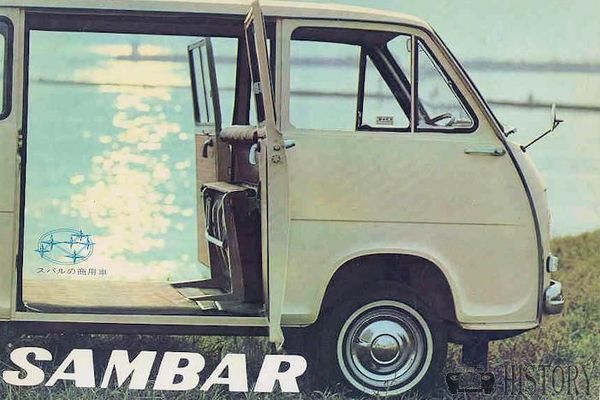 The Subaru Sambar is an compact van built by automaker Subaru for the Japanese market. It is Japan's first Keitora (軽トラ), shorthand for "kei class truck" and is still in production. The Sambar is available in both microvan and Kei truck (Pickup truck style) to fulfill the Kei car guidelines. Still popular in the domestic market, the Sambar continues to be produced in Japan, China, Korea, as well as in Finland with a joint venture with Elcat Automotive.

The current 2008 Subaru Sambar model is still using the Sixth Generation chassis and body with updated fascia. It was the first Kei truck in Japan that used a cabover design, with the passenger cabin over the engine. 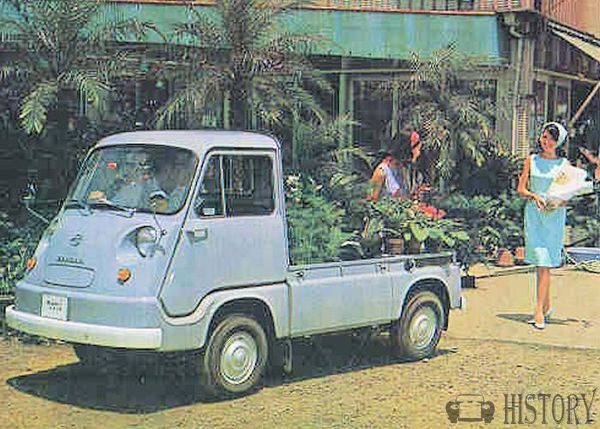 From the very beginning in 1961, the Sambar uses 4-wheel independent suspension and a rear engine rear drive powertrain that helps keep the vehicles weight balanced. It was based on the Subaru 360 platform and it was introduced at the 1960 Tokyo Motor Show in both private purchase and commercial versions. The Chassis uses a ladder frame construction, using a torsion bar trailing arm suspension in the back. The reverse gearshift position was a left pattern selection, instead of a right pattern selection. The engine, called the EK series, was accessed from an access hatch inside the vehicle. The front doors opened in the same fashion as the 360, meaning the doors opened backwards, with the rear passenger doors opening conventionally, causing the hinges for all doors to be centrally located, with a rear hatch in back. Bunk beds could be installed as an option for outdoor camping use.

The Sambar was created for the market segment that desired a Subaru 360 that was able to carry small loads, such as for commercial delivery usage. The nickname for this version is the "kuchibiru" Sambar. 1961 saw competition in form of the front-engined Suzulight Carry which placed the engine in front of the driver but also adopted the cabover approach in 1966, and the Daihatsu Hijet cabover appeared in 1964.

The redesigned Sambar appeared in January 1966 with a fresh new appearance, with a truck version introduced. The nickname for this generation is "baban" Sambar.

A raised roof for extended headroom was added to the options list in 1968. Starting with the 1970 model year, the engine was now accessed from outside the vehicle, and the front doors were conventionally hinged. To enhance safety a full padded dash pad was introduced, sharing the dashboard panel from the new R-2.

A styling upgrade was also done, adding a faux grille to the front of the vehicle that had no function other than a more modern appearance, as well as bringing the corporate look of the all new compact Subaru Leone.

The third generation appeared 10 February 1973, this one nicknamed the "Tsutomu Tsuyoshi" Sambar due to an advertising campaign at the time. The first series still carried a two-stroke two-cylinder 356 cc engine but by now water-cooled. The engine code was EK34, the truck received the K71 model code while the van was called K81.

As of February 1976, the engine was upgraded to the EK21 four-stroke water-cooled version introduced in the Rex to reduce emissions. This model saw the introduction of an electric window washer pump to improve driver visibility. Because of regulations changes, only three months later the engine was again upgraded with a 490 cc displacement (EK22) engine of a similar layout for the Sambar 5 (K75 truck, K76 panel van, K85 van). This was naturally sold as the Subaru 500 in export markets.This was in turn soon replaced by a full 550 cc (EK23) model, the K77/87 of March 1977. In export, the Sambar 550 was known as the Subaru 600 and then the Subaru 700, with a 665 cc version of the EK engine.

This model saw the introduction of a sliding side door added on both sides (although a version without the driver's side door remained available), with a full "B" pillar to enhance body stiffness instead of the approach used by the Nissan Prairie which had the front and rear doors interlock together. Minor horsepower improvements were introduced in 1977 along with an increase in the width of the vehicle. A sunroof was added to the options list in 1979. 4WD was introduced as an option in 1980, on both the van and truck bodystyles, conciding with the same feature being offered on the Subaru Rex.

May 9, 1982 is when the fourth generation model appeared (KR), also introducing the non-commercial Sambar Try (KT). The suspension was upgraded to a four-wheel independent layout with MacPherson struts for the front wheels. The wheel size increased from 10 inches to 12 inches, thereby accommodating larger drum brakes used at all four wheels. The 4WD was available with a dual-range transmission.

January 9, 1987 saw an extended roof feature available both with the Sambar Try trim level with the commercial version available with the standard height roof. An electric clutch was added to the options list as did disc brakes for the front wheels. Full-time 4WD was available towards the end of this generations product cycle. In April 1989, a six-valve engine producing 25 kW (34 PS) joined the regular engine, itself downgraded to 28 PS. The EN05 four-cylinder engine used in the Rex was never fitted to the KR/KT Sambar, as it would require lots of reengineering to a soon to be replaced platform. The Domingo was available with the 3-cylinder EF10 1000 cc engine starting in 1983.

A bigger version of the Sambar was available in Europe from 1983 with larger engines, the Sambar went by several names, such as the Subaru Sumo, Libero, (Japanese: Domingo) and Columbuss starting in 1983. The small-bodied version went by the name of Subaru 700 in the few markets where it was available.

The primary difference between the Sambar and the larger-engined variants is the extension of both the front and rear bumpers to aid in occupant protection. The larger Domingo (and its various iterations) isn't considered "kei class" because the dimensions exceed the requirements and the engine displacement is larger than regulations allow. 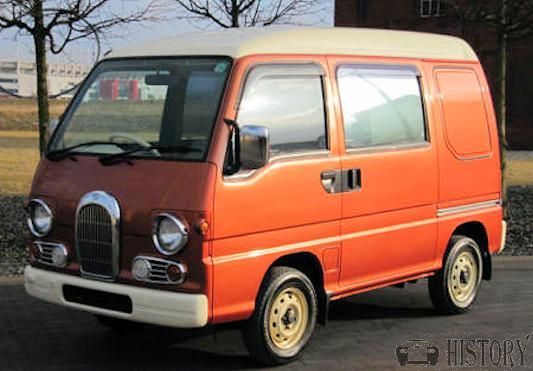 The fifth generation Sambar was introduced in 1990. Engine regulations for displacement size were increased and the Sambar's engine was upgraded to 660 cc. For the 4WD version it sold as Subaru Dias Wagon as a permanent trim model. Commercials in Japan used Kuniko Yamada.

The tradition of using the engine in Subaru's kei car offering, the Subaru Vivio's engine was shared in this version of the Sambar, the EN07. The engines piston amount increased to four cylinders and 55 PS (54 bhp) was available with an optional supercharger and intercooler package, coupled with fuel injection. An automatic transmission was offered in the form of Subaru's ECVT system in tandem with full-time 4WD and a viscous coupling differential.

1994 saw a full model change with a body similar to the Domingo, with the EF12 three-cylinder engine's displacement increased to 1200 cc and SOHC borrowed from the Subaru Justy. A maximum seating capacity of seven was possible. October 1995 saw the elimination of the ECVT transmission due to drivability issues and a 3-speed automatic was available instead, coupled to the EMPi 46 PS (45 bhp) engine.

Special edition appearance packages were offered including a retro "Dias Classic", later available on the Sambar truck, influenced by the Subaru Vivio Bistro.

The sixth generation was available for purchase May 2, 1999, and in 1998 kei class vehicle size regulations allowed for an increase in body size. The 4WD Dias is now only offered with a 3-speed automatic transmission, with the supercharger optioned engine power output increased to 58 PS (57 bhp). Carburetors are no longer used on the current version of the Subaru EN engine for the entire product line, and the EF engine is no longer manufactured.

On June 26, 2007 in the Japanese newspaper Nikkan Kogyo saw an article claiming that due to the investment by Toyota in Fuji Heavy Industries, the parent company of Subaru, that all kei class vehicles made by Subaru would end and be replaced by Toyota-owned Daihatsu models, rebadged as Subarus, which didn't go over well with traditional Subaru customers, especially loyal customers of the Sambar, the first microvan introduced in Japan. The Sambar's Daihatsu competitor is the Atrai and the Hijet. September 2009, the Sambar was replaced with the Subaru Dias Wagon, a re-badged version of the Daihatsu Atrai van. 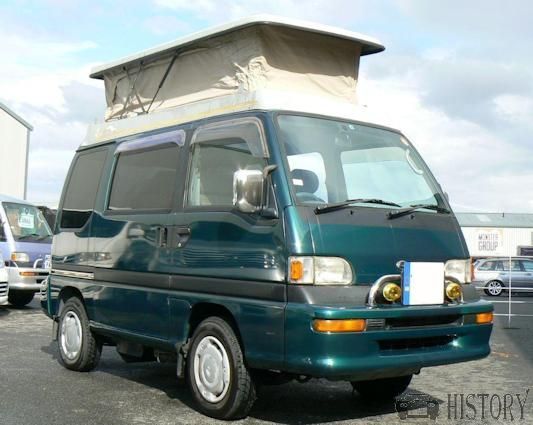