Subaru revealed the third generation Impreza at the New York Auto Show on April 2, 2007—both the standard naturally aspirated Impreza and turbocharged WRX versions were revealed  The high-performance WRX STI debuted in October 2007. Initially, the new Impreza was offered as a five-door hatchback (designated GH), with the four-door sedan (designated GE) introduced in 2008. The wide-body variants of the hatchback and sedan are labelled GR and GV, respectively. Dimensionally, this version is wider by 56 mm (2.2 in) and increases track by approximately 38 millimetres (1.5 in). Although first adopted by the STI, the wide-body platform was later utilized by the regular WRX range.

The third series of Impreza is slightly longer, wider and offers a longer wheelbase. Two Subaru traditions were discontinued with the new model: the parking light switch atop the steering column is no longer present, and for the first time the windows have frames to improve noise, vibration, and harshness levels. Subaru made an effort to control the weight of the new chassis. Despite the increase in size, stiffness, and safety equipment, the car's weight is similar to the previous generation. The front suspension uses a MacPherson strut setup, while the rear features a new double wishbone suspension. 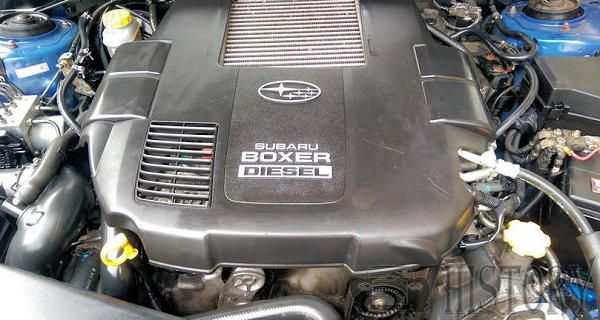 In the Japanese domestic market the range comprised the 1.5-liter 15S, plus the 2.0-liter 20S and turbocharged S-GT, both using the 2.0-liter engine. Japanese dealers retailed the hatchback initially, with the sedan body variant arriving in autumn 2008 as the Impreza Anesis. This generation represented the first time that the Impreza was no longer in compliance with Japanese government regulations concerning exterior dimensions. Japanese specification models are fitted with an engine start button.

North America received only the 2.5-liter models. Released to the United States market for the 2008 model year, the model range consists of the 2.5i, the turbocharged WRX, and the Outback Sport that Subaru marketed as a separate model line. The naturally aspirated models are electronically limited from surpassing 190 km/h (120 mph). For 2009, a new 2.5 GT trim arrived to the market with the turbocharged 167 kW; 227 PS (224 hp) engine from the 2008 model WRX (this 2009 WRX received a boost in power). While automatic transmission was not available with the WRX, the 2.5 GT did gain an optional four-speed automatic. In the Canadian market, the base Impreza 2.5i received upgrades for the 2009 model year, including rear disc brakes, electronic stability control, and body-colored door handles—features previously only found on the 2.5 Sport and more expensive trims.

Safety of the car has been increased with range wide inclusion of electronic stability control as standard in many markets. When the Insurance Institute for Highway Safety (IIHS) in the US crash-tested the five-door Impreza, the organization granted the Impreza the highest ranking available. ANCAP in Australia tested the Impreza where it scored 34.66 out of 37 points, or the full five-star rating in the occupant safety crash test; the Impreza also scored a four-star pedestrian safety test.

The Impreza range received a facelift in late 2009 for the 2010 model year, gaining a new grille insert. 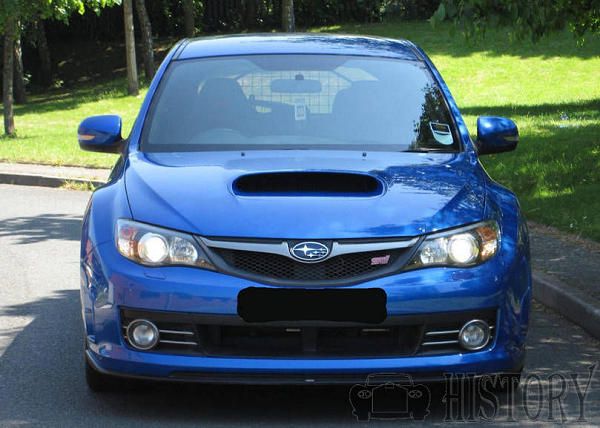 Subaru debuted the turbocharged WRX performance variant of the third generation series alongside the mainstream naturally aspirated models on April 2, 2007. For this generation, most markets adopted the abbreviated name "Subaru WRX", although the Japanese and North American markets retained the full "Subaru Impreza WRX" title. The 2.5-liter EJ255 engine is largely unchanged internally. Changes in the engine compartment consist primarily of a fourth generation Legacy GT style intake manifold and intercooler. The TD04 turbo remains from the previous generation, however it has been adjusted to fit the new intake design. Power output consists of 169 kW (227 hp) and 320 N·m (236 lb·ft) from its 2.5-liter engine. It was offered in either a five-speed manual, or 4 speed automatic. The five-speed manual transmission was changed to the same found in the fourth-generation Legacy GT. The rear limited slip differential has been discarded in exchange for the new VDC (Vehicle Dynamics Control) system. The weight of the car also has been lightened and gives the WRX a 0 to 100 km/h (0 to 62 mph) time of 5.8 seconds. In contrast, curb weight of the standard Impreza model is around 27.2 kg (60 lb) heavier. The STI (3,395 lbs) is heavier than the WRX (3,174- 3,240 lbs depending on trim) due to a more robust transmission, rear differential and other chassis reinforcements. For the US market, the WRX was offered in "base", Premium, and Limited trim levels. In Australia, the WRX is available as a sedan or hatchback. An optional premium package adds the satellite navigation with DVD player and 7-inch screen, leather upholstery and a sunroof.

Further changes in 2010 for year model 2011 saw the WRX gain the wide-body shell from the STI, as well as the addition of quad muffler tips with diffuser. The new model gains 15 kilograms (33 lb). Firmer rear sub-frame bushings and wider 17-inch wheels contribute to improved traction.

Debuting at the Tokyo Auto Show in October 2007, WRX STI versions build further on the standard WRX cars. The STI available in Japan is fitted with the 2.0-liter EJ207 engine with twin scroll turbocharger generating 227 kW (308 PS). Export markets receive the higher-displacement 2.5-liter EJ257 unit with the single-scroll VF48 turbocharger rated at 221 kW (300 PS) and 407 N·m (300 lb·ft) of torque. The turbocharger directs air through a larger top-mount intercooler which has lost the red "STI" that was on previous generations.

Like the standard WRX, the third generation model was shortened to "Subaru WRX STI", with the Japanese and North American markets notably abstaining from this convention. To differentiate the STI from the regular WRX, Subaru opted to manufacture the STI with a wider body and therefore track—as noted by the flared wheel arches. Furthermore, Subaru utilized aluminum suspension components for the STI. Electronic modifications include a multi-mode electronic stability control with "normal", "traction", and "off" modes; Subaru Intelligent-Drive (SI-Drive) with three modes: "intelligent", "sport", and "sport sharp"; and multi-mode driver controlled center differential (DCCD). The DCCD enables driver to switch between manual and automated torque distribution ratio of the center differential. This distribution can vary from 35/65 to 50/50 front/rear.

In 2010 for the 2011 model year, the WRX STI became available as a four-door. The most noticeable feature on the STI sedan is a large rear spoiler. Australia also received the 2011 model year STI as a sedan to complement the hatchback released in 2008. Australian STIs were offered in standard form, plus the STI spec.R. An electric sunroof, leather upholstery, satellite navigation, and BBS wheels are standard on the spec.R, while Recaro seats are optional.

A facelift of the STI arrived in 2010 for the 2011 model year, distinguished by a new front bumper. Tweaks to the suspension—stiffer springs, larger anti-roll bars, new pillow ball bushings on the front lower arms, as well as wider standard tires—had the effect of improved handling.

It is a concept vehicle based on the Impreza WRX STI hatchback with upgraded springs and shocks, revised suspension bits, lightweight 12-spoke wheels, undisclosed engine tweaks and a slightly reworked exterior.

The vehicle was unveiled in Motorsport Japan 2008.

It is a limited (900 units) version of Impreza WRX STI for Japan market. It included engine, suspension, and body parts improvement over the regular model. The ball bearing on the turbine axle was modified to reduce friction, the ECU retuned for better response, and an intercooler water spray fitted. The cross member, suspension and power steering were also improved for better handling and body rigidity. An aluminum hood, laminar window glass, and a lighter battery helped to reduce weight.

It is a version of WRX STI with a five-speed semi-automatic, steering wheel-mounted paddle shifter. The vehicle went on sale initially in Japan and Singapore, and later also in Hong Kong, and later in Thailand, Indonesia, and Australia in 2011.

Subaru announced, on September 10, 2008, that the 380S variation would not be produced, due to homologation and specification difficulties. However, the regular 330S model did enter production as the "WRX STI Type UK". 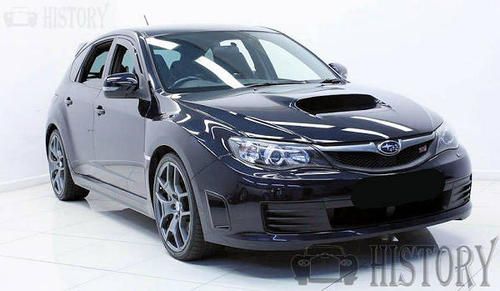 It is a limited (300 units) version of Impreza WRX STI sedan for Japan market.

It is a version of Impreza WRX STI A-Line 4-door sedan and 5-door hatchback for Japan market. 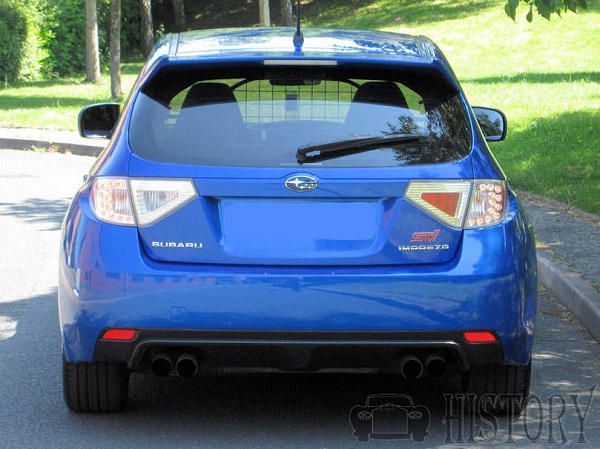