Subaru introduced the "New Age" Impreza to the world market in 2000. Larger in size compared to the previous iteration, the sedan increased its width by 40 millimetres (1.6 in), while the hatchback notably increased by just 5 millimetres (0.2 in)—placing the two variants in different Japanese classification categories. The coupe body style from the first generation did not reappear for the new series. However, the off-road appearance package that included contrasting-colored bumpers did carry over forward. Marketed as a separate model line, this North American-only variant was, as before, badged Subaru Outback Sport.

Although the headlamp styling of the "New Age" Impreza was considered polarizing, improvements to the car brought greater mainstream acceptance. Subaru updated the Impreza's fascia in 2002 with more rectangular headlamps. In 2005, Subaru introduced a second facelift which introduced Subaru's new corporate face—including the controversial "jet intake and wings" grille design.

An anomalous relative to the second generation Impreza is the Saab 9-2X. Manufactured by Subaru between 2004 and 2005, the Saab retailed only in the North American market for the 2005 and 2006 model years.To better integrate with the Saab design language, the 9-2X received redesign of the front- and rear styling and various minor tweaks.

The second generation of the Subaru Impreza is a compact automobile, manufactured between 2000 and 2007 by Subaru in Ota, Gunma, Japan. As with its first generation predecessor, Subaru split the range into four-door sedan and five-door hatchback body variants; the firm did not carry forward the previous coupe style. Mainstream versions received naturally aspirated 1.5-, 1.6-, 2.0-, or 2.5-liter flat-four engines, with the performance oriented "WRX" and "WRX STI" models uprated to turbocharged versions of the two latter options. Like most Subaru models of similar vintage, all-wheel drive tended to be offered as standard in export markets, with front-wheel drive also available in Japan.

Introduced as the "New Age" Impreza, the polarizing headlamp styling divided critics who were quick to designate the model as the "bug eye" Impreza. A subsequent facelift in 2002 toned down this frontal styling, but a second facelift in 2005—characterized by an aviation-inspired three-part mesh grille—also attracted controversy.

Built on a significantly modified version of the first generation platform, the new Impreza followed much the same formula as its predecessor, including a similarly contoured silhouette. Despite this, the front-end styling—distinguished by ovoid headlamps—attracted significant controversy. Body dimensions for the sedan increased by 45 millimetres (1.8 in) in length, 40 millimetres (1.6 in) in width, and 25 millimetres (1.0 in) in height; wheelbase increased by 5 millimetres (0.2 in). To satisfy Japanese vehicle size tax regulations, the width of the hatchback increased by just 5 millimetres (0.2 in) to 1,695 millimetres (66.7 in) and therefore remaining in the limit "5" classification. As Subaru had intended to homologate the sedan chassis for rallying, the decision to increase the width of the sedan—which placed it into the higher taxed number "3" division—brought added stability. Likewise, the 20-millimetre (0.8 in) increase in track for the sedan also worked the aid handling, with the hatchback gaining just 5 millimetres (0.2 in). Other main improvements to the chassis included a 120 percent increase in torsional rigidity; mainly due to revisions in front subframe design. The suspension retained its basic McPherson strut in the front and rear, although Subaru altered the geometry.

The GD chassis gains nearly 200 kilograms (441 lb) in weight over the GC chassis. Subaru claims that compared to the previous model, the GD chassis is 148 percent and 82 percent stiffer in torsional and beam rigidity, respectively. This stiffness is primarily due to the addition of a steel "ring" which encircles the cabin at the B-pillar. While the stiffness was increased for passenger safety, it has the added benefit of providing more stability for motorsports events. Firehouse magazine notes that the Jaws of Life need to cut the Subaru's B-pillars at certain points in order to cut through the car frame.In terms of safety, the GD chassis scored much higher than the GC chassis and earned a "Good" rating (highest mark) from the IIHS's offset crash test. 4 stars front driver, 5 star front passenger and 4 star side safety ratings from the NHTSA.

In Subaru's home market of Japan, the Impreza range started with the 1.5i—powered by the 1.5-liter EJ15 SOHC engine and paired with a manual transmission or optional automatic. Subaru fitted a DOHC version of the same engine to the automatic-only 1.5R, which also featured an active valve control system. For both models, front- and all-wheel drive versions were available. Starting from 2006, Subaru phased out the EJ15 engine in favour of the new EL15.

Subaru released this generation of Impreza to North America in 2001 for the 2002 model year. The release of the 169 kW (230 PS; 227 bhp) 2.0-liter turbocharged Impreza WRX, did not occur until the 2002 model year, and the Impreza WRX STI was delayed until the 2004 model year. The US version of the STI includes various departures from the Japanese and European counterparts, such as a turbocharged 2.5-liter EJ257 engine, rather than the twin scroll turbo 2.0 L engine sold elsewhere. All 2006 American Imprezas use some form of the 2.5-liter EJ25 engine since naturally aspirated and turbo charged are available.

The Outback Sport was sold in Australia for model years 2001–2007, but it was renamed as the Impreza RV with the same color scheme as the American version.The Australian version had a dual-range manual transmission, not available in the USA. The Impreza was Wheels magazine's Car of the Year for 2000.

After mixed reaction to the round headlight design, in 2001 Subaru enlisted the help of Peter Stevens of Prodrive, who updated the car's fascia in 2002 (2003 in the US for the 2004 model year), with more rectangular headlamps. For the US market, the facelifted Impreza was offered as 2.5 RS Sedan and TS Wagon, 2.5 Outback Sport Wagon, WRX Sedan and Wagon, and the new WRX STI Sedan. Sport Package was optional for the RS, and the WRX could be ordered with Premium Package. The RS, TS, Outback Sport, and WRX are available with manual or automatic transmission, while the sole transmission for the STI is 6-speed manual.

In 2005, Subaru made their AVCS standard on all engines used in the Impreza.

From June 2005 in Japan (2006 model year) Imprezas have been redesigned, along with new headlights, taillights, and bumpers. Greek designer Andreas Zapatinas, formerly of Alfa Romeo, penned the updated front-end in 2004. The facelift introduced Subaru's new corporate face, including its controversial "jet intake and wings" grille design that first appeared on the Subaru R2 kei car. The new corporate face chose this style to pay homage to their aircraft manufacturing roots, the Nakajima Aircraft Company.

In December 2000, the Subaru updated the WRX to the second generation. The GDA WRX model also retained the 5-speed manual transmission gearbox design from the GC8. Subaru later released a new 6-speed gearbox for the STi model GDB that is significantly stronger.

The GD chassis along with the WRX and STI underwent two styling changes in its life cycle. The original styling applied to A & B. Initially this design proved to be rather unpopular which prompted a more conventional design for the applied C, D & E models. The second facelift applied to the F & G versions. 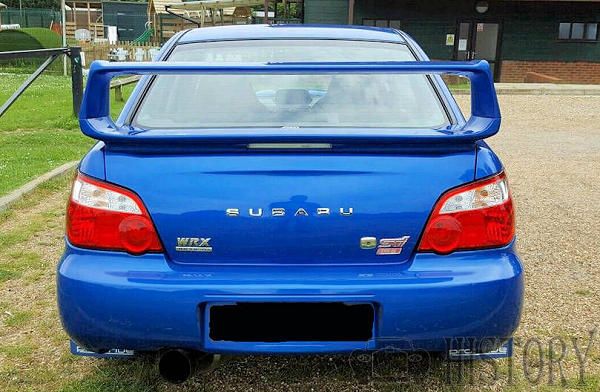 The WRX STi gained 17" x 7.5" alloy wheels over the previous 16" x 7" wheels. The 5 speed manual transmission (reputed to be one of the car's weakpoints) was changed to an STi engineered 6 speed manual transmission. The engine was retained from the Version 6 STi and still retains the semi-closed deck block and is still labeled as the EJ207, however the engines did gain Variable Valve Timing (AVCS) further improving their low end torque production. The interior was updated with a STi logo on the gauge. The STi's tachometer also has a red shift light. The STi's and optioned Type RA STi have received Brembo 4 piston front and 2 piston rear brakes while the bare-bones Type RA STi still carried the Subaru 4 piston front and 2 piston rear brakes. Externally, the STis had larger hood scoops and had foglight covers with STi embossed on them. The DCCD was updated so it can work with anti-lock brakes. During braking, when the ABS is on, the DCCD will set itself to open-mode (no locking).

The version nomenclature was dropped from the name. Japanese and other auto-enthusiasts often refer to the chassis as GDB/GDF (the STi has a 'B' or 'F'(for USDM models) whereas the regular WRX had an 'A'). The fourth character of the VIN gives the revision (A to F where G is the 2007 version).

2005 STis received the long awaited DCCD control available in other markets, as well as a slight wheelbase increase to match the Japanese-spec WRX STi Spec-C and has 280 PS (210 kW; 280 hp). 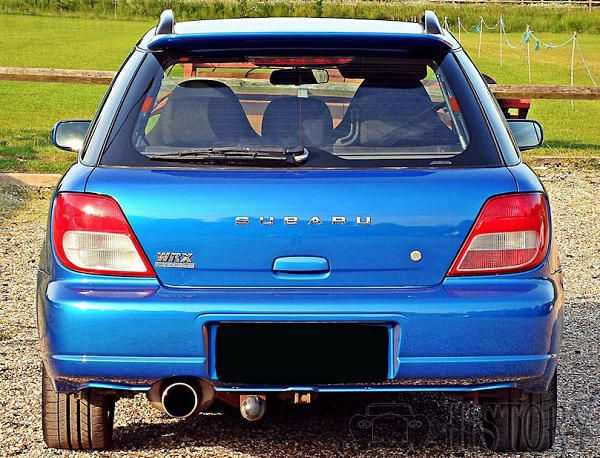 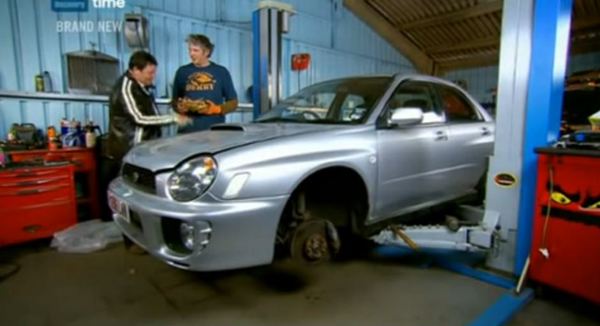