The third generation (KG/KN) was presented in November 1986 with the commercial spec Rex Combi with either three or five doors. The sedan version, intended for private use, was added a month later. In addition to an SOHC two-valve engine with 30 PS (22 kW), a version with three valves per cylinder (two intake and one exhaust) and 36 PS (26 kW) was also available. There was no turbo version of the new Rex. A two-speed automatic transmission was also available, as was a part time 4WD system. "Twin Viscuous" full time 4WD with a limited slip differential for the rear axle was made available in February 1987. From this point all four-wheel drives received the more powerful three-valve engine. A CVT transmission was added June 1987, called ECVT. 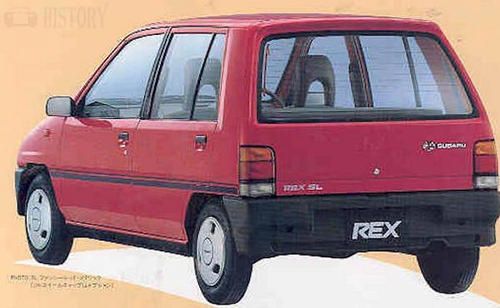 A supercharged version with an intercooler and electronic fuel injection was added to the options list March 1988 as a response to the success of the Alto Works and Mira TR-XX. The output of the engine increased to 55 PS (40 kW). A supercharger meant less lag than for a turbo, although specific output tended to be somewhat lower than the competition. This was available for both the 3- and 5-door versions. May 1988 saw an available electrically deployed canvas top added to the 3-door. 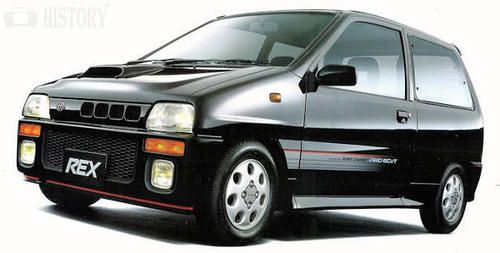 June 1989 saw a facelift and the replacement of the EK series engine to the four-cylinder EN05 "Clover 4" with 38 PS (28 kW) available to the standard engine and 61 PS (45 kW) from the supercharged engine. This was the first Kei four-cylinder since the Mazda Carol, and was unique to the class. This, the KH1/2 series Rex (KP1/2 for the commercial Rex Combis), remained available in combination with the ECVT transmission and four-wheel-drive versions, but the two-speed automatic was dropped. In July, export versions (M70 in Europe, Sherpa in Australia) received the same changes and switched from the 665 cc 37 PS (27 kW) two-cylinder to become the M80 in Europe and the Fiori in Australia. This iteration was uncommonly short-lived, as in March 1990 another facelift followed, with a 660 cc version of the EN engine (EN07) and an extended, more rounded nose because of new Kei regulations taking effect. These external differences did not appear in the Australian market until August, and in Europe (Mini Jumbo, M80) by early 1991.This, which was to be the last Rex, received chassis codes KH3 (FF sedan), KH4 (4WD sedan), KP3 (FF commercial), and KP4 (4WD commercial). This generation Rex was marketed as the Viki in certain Southeast Asian markets. 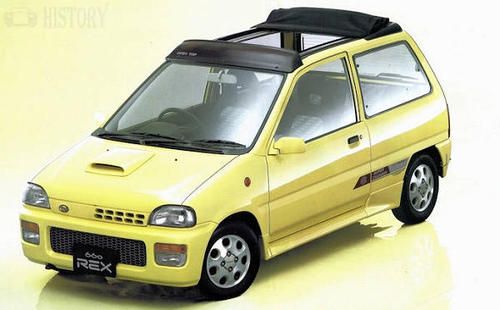 Rex is also a common nickname for the high-performance Subaru Impreza WRX, especially in Australia where the actual Rex was originally marketed as the Sherpa and then as the Fiori. The Fiori derivative (sold as such from summer 1989) was also equipped with pink and blue pinstriping from the factory, and a two year, 50,000 km warranty was offered when new. Equipped with a different engine, the Fiori had Subaru's 758 cc carburetted four-cylinder EN08 powerplant. This engine, producing 42 PS (31 kW) at 6,000 rpm, was also used in those European markets that received the Rex. In Europe it was rebadged M80 to reflect the engine displacement. The M80 was available as a three or a five-door, in DL and SDX versions, with the SDX receiving a standard five-speed manual. Top speed was 125 km/h for four-speeds, 130 km/h for five-speeds.

The end for the Rex came in March 1992, when it was replaced by the Vivio. A total of 1,902,811 Subaru Rexes were built in its lifetime. Recently the Rex has become somewhat of a cult car in Japan, being popular in front-wheel-drive drift events.

Chinese Yunque (Guizhou Aircraft Industry Corporation) built the second generation Subaru Rex under license as the Yunque GHK 7060 between 1991 and 2005. There were also GHK 7060A 'Free Wind' and GHK 7071A 'WOW' iterations, featuring interesting bodykits. 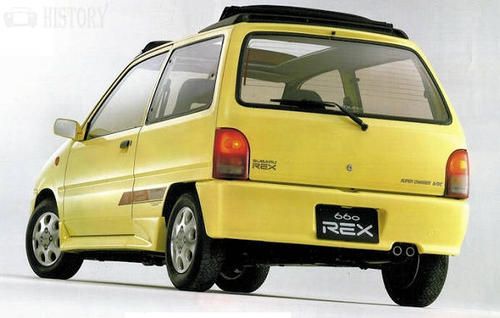