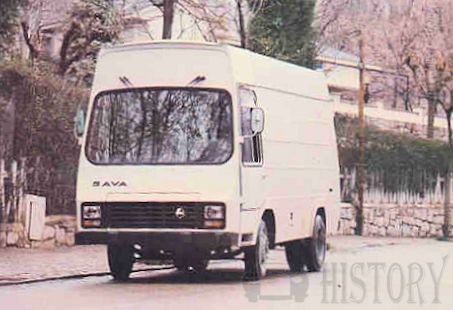 Sociedad Anónima de Vehículos Automoviles (SAVA) was a Spanish producer of light and medium commercial vehicles, based in Valladolid.It was founded under the name of FADA  and in 1952 it began to build motorcycles.

In 1957 SAVA was created in a new factory in Valladolid. In the new facilities, the firm continued with the manufacture of motocarros and was a pioneer in the construction of plastic cabinets for them. In 1959 they built the first vans with Barreiros engines , the well-known Sava P-58.

For a short period they also assembled the GPS-12 truck of the French company Berliet , marketed as Sava-Berliet , with a load of up to 24 tons. At the moment, the production was very diversified, because besides the Berliet, they manufactured the FH-800 , SH-400 , SH-450  And SH-550 .At the beginning of the 60s they began to manufacture cabins of their own design and from then on, only the Sava logo was used.

In 1965 the production of the J4 van began under English license. With several aesthetic modifications, it remained in production until at least 1988 , already under the Pegaso brand. The Cosmos van was also introduced in 1968 .

At the end of the 1960s, Enasa , manufacturer of the Pegaso trucks , bought SAVA, although the brand continued to be used until the following year, after which the vehicles were sold as Pegaso. As a result, it stopped manufacturing heavy trucks - which made it the competition - and reduced its range of vans.In 1968 removed the truck S-211 . Its evolution (S-221, S-212 ... up to model S-551) was in production until the absorption of Pegaso by Iveco. In 1972 the last new range appeared, with the box square Cosmos.

Production of these SAVA vans ended in 1990 when the ENASA company was acquired.