Automotive manufacturer of Spain from 1953 on 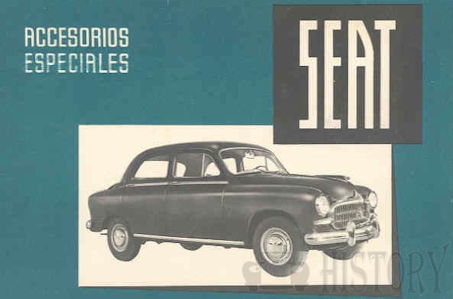 Seat, SA  is a 1950 based automobile manufacturing company based in Martorell . It belongs today to the Volkswagen AG .

On May 9, 1950 as S ociedad E Spanola de A utomóviles de T urismo, SA ( "Spanish Society of passenger cars") in the Industrial Park of Barcelona , the Zona Franca founded. The 600 million pesetas contributed 51 per cent to the national holding Instituto Nacional de Industria under Franquism , 42 per cent to Spanish banks and 7 per cent to Fiat . After the factory opening on June 5, 1953 ran on 13 November, the first car, a Seat 1400 based on the Fiat 1400 from the band of the state automobile plant.

In 1982 began a cooperation with Volkswagen AG , which gradually developed until 1986 to a complete takeover of Seat by Volkswagen. Since 1986 Seat belongs to the Volkswagen Group .

All vehicles until 1984 were licensed production of the Fiat Group and thus almost identical with models of the brands Fiat and Lancia . So also bodies were largely identical. This is a concept that Seat has largely pursued with the production of the models Exeo ( Audi A4 ), Toledo ( Škoda Rapid ) or Alhambra ( VW Sharan ) later.

At Seat, vehicles are also produced for other brands, with the model Q3 being produced for Audi in Martorell and the Polo model being produced in Pamplona for Volkswagen . The Ateca and Toledo models are manufactured and partially developed by Škoda Auto in the Czech Republic.

The Sociedad Española de Automóviles de Turismo SA (SEAT) was founded on 9 May 1950 by the Instituto Nacional de Industria (Industrial Institute) with a nominal capital of 600 million pesetas (3.6 million euros). The Industrial Institute held a majority of 51 percent, with six Spanish banks holding 42 percent and Fiat 7 percent. With the founding of Seat, the foundation stone was laid for the first plant in the industrial zone Zona Franca in Barcelona, ​​which was opened on 5 June 1953.

The first model was a Seat 1400 A, of which at the beginning 5 pieces per day were manufactured. With the Seat 600 presented the young brand in 1957 the Spanish counterpart to the VW Beetle. With the Seat 600, many Spaniards could afford their own vehicle for the first time.

In 1964, the administration of Barcelona moved to a new administrative building in the Spanish capital Madrid. Seat employed meanwhile over 10,000 coworkers.

At this stage, as a state-owned company, Seat was largely geared to the domestic market, which was protected by high import tariffs until the 1970s, and was the undisputed market leader. Due to this orientation and the license requirements of Fiat export business until the early 1970s was insignificant, before the first exports were made mainly in the Benelux countries and Finland. As early as 1973, Seat exported more than 78,000 units to other European countries. In the same year Seat began building the Centro Technico in Martorell, Spain, and became rally champion in Spain. In order to further expand vehicle production, Seat took over in 1974 the work of Leyland Authi in Pamplona, ​​Spain and moved the production of the Seat 124 there.

Seat built in these decades exclusively in license vehicles from Fiat . The brand logo was modeled on that of Fiat, with the difference that instead of inclined diamonds squares were used. The competitors on the domestic market were all licensees or joint ventures of foreign companies, including Renault (in Spain Fasa ), Citroën , Land Rover  / Suzuki (in Spain Santana (Metalúrgica de Santa Ana) ). The reason for this was enormous tariffs on foreign new vehicles during the Franco periodand limited import quotas. These made the import of foreign new cars almost impossible. The Spanish market for self-developed product lines would have been very small. Most popular model of Seat during this period was the Seat 600 , lovingly Seiscientos or Catalan Siscents called. Almost all Spanish taxis at that time were Seat 1500 , called Milquinientos for short . 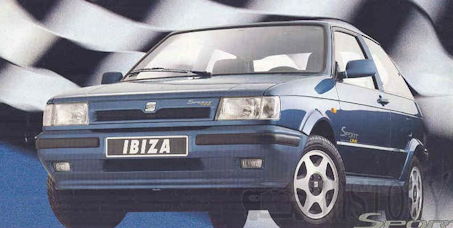 Seat introduced a new corporate identity with the blue corporate logo . It came to a rift with Fiat, because Fiat did not want to participate in a capital increase to restructure. The Seat Ronda and the Seat Fura , which were largely identical with the Italian models Fiat Ritmo and Fiat 127 , were declared as independent models. Seat introduced the Ibiza as the first independently developed model. The kinship was limited only to the chassis and some engines, but independently of the licensor Fiat (with the help of Porsche) were further developed. The foundation stone in Martorellwas laid. Seat and Volkswagen concluded on September 30, 1982 a production and economic agreement. Seat began the market development towards Europe.

Seat began in 1984 with the production of the VW Polo in Pamplona and the Passat in the plant Zona Franca, which was a result of the two years previously agreed agreement. In addition, Seat took over the marketing and sale of vehicles of the brands Audi and Volkswagen in Spain.

The cooperation with Volkswagen developed into a 75% participation. Seat Sport appeared for the first time in the motorsport scene. Volkswagen expanded its stake in Seat to 99.99 percent. The Sociedad Española de Automóviles de Turismo became Seat SA

To increase its production capacity, Seat laid the foundation for its new plant in Martorell in 1989, which was to be the most modern automobile plant in Europe after completion. After 34 months of construction and an investment of 400 billion pesetas, the then King Juan Carlos and then CEO of the Volkswagen Group, Ferdinand Piëch, opened the plant on 22 February 1993. In the financial year 1993, Seat reported a loss of 151 billion pesetas (1.8 Billion DM).

The 1992 Summer Olympics in Barcelona supported Seat as one of the sponsors. In addition, the first-generation Seat Toledo became the official Olympic car. In order to further increase the export share, Seat began in May 1995 with the Seat Cordoba the market entry in Brazil. Due to the company's financial problems, the workforce was reduced to 12,600 employees in the same year.

The first Cupra (Cup Racing) model of the brand was presented at the Paris Motor Show in 1996 as the Seat Ibiza Cupra. The Ibiza Cupra should be the street version of the Seat Ibiza Kit Car introduced in the same year. With the Ibiza Kit Car Seat took part in the FIA ​​World Rally Championship and won the victory in the two-liter class. In the two following years Seat was able to continue the winning streak.

With a new design and sporty models, Seat occupies a place in the Audi brand group . In 2001, Seat adopted with a victory in the three-city rally of the German Rally Championship from motorsport .

58,997 Seat new vehicles were newly registered in 2003 in Germany, a market share of 1.76 percent. The highest export growth was achieved by Seat in addition to Germany in Great Britain , where with 35,000 new registrations (+21 percent), a record result was achieved. In Spain Seat grew with 148,100 new registrations by 3.2 percent. Seat also recorded significant growth in Croatia , Slovakia and Hungary . In total, the company produced 460,040 seat vehicles at the Martorell plant and other Volkswagen Group production facilities , 2.1 percent more than in 2002. 460,151 vehicles were sold to end customers.

Seat returned to international motor racing with the Toledo Cupra at the European Touring Car Championship ( ETCC ) of the FIA . In the same year Seat launched a new one make cup concept. The Leon Supercopa championship is not only decided in the circuit race, but also includes long-distance races and a mountain championship. Seat achieved a profit of € 135 million in the 2003 financial year. The Altea is the first seat that has been developed since the integration of the Spanish brand into the new Audi brand group in 2002.

On 1 March 2005, the prototype of the new Seat Leon with 147 kW engine (200 hp) was presented at the Geneva Motor Show. Special features of the prototype are four cameras, whose image on two monitors in the vehicle complement the rearview mirrors and improve the all-round visibility.

Seat presented the new Seat Ibiza (internal 6J) to the public on May 22, 2008 . It is the first vehicle in the Volkswagen Group to be based on the new small-car platform of the then-coming Polo.

With the Seat Exeo Seat introduced in 2009, the already announced in 2007 sedan based on the 2004 built from 2004 to 2008 Audi A4 . A station wagon model has been on the market since summer 2009. At the IAA in Frankfurt was the first prototype of the Ibiza ST called IBZ, the mini-station wagon came on the market in 2010.

2010 to today - New Models and Restructuring

In May 2010, Seat SA celebrated its 60th birthday and launched the second generation of the Alhambra. In addition, the current Ibiza series has been expanded to include the Ibiza ST (SportsTourer). With the introduction of the Seat Mii end of 2011 Seat rose since the end of the Arosa series back into the class of micro cars. The Seat Mii is an adaptation of the VW Up! and belongs to the New Small Familywithin the Volkswagen Group.

At the Geneva Motor Show 2012 Seat presented the facelift of the Seat Ibiza and a near-series study of the next Seat Toledo . While the Ibiza was already orderable shortly after the presentation, the launch of the on the Škoda Rapid based Toledo will take place only in early 2013. The third generation of the Seat Leon celebrated its premiere on 27 September at the Paris Motor Show and came on 24 November 2012 to the dealers. The Leon is the first model with the new brand logo. 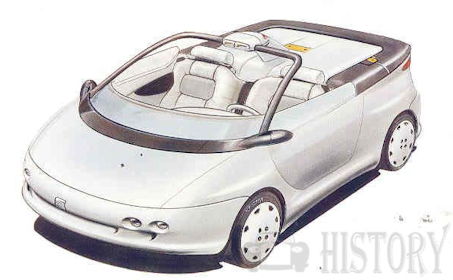