The Mégane II was launched in September 2002, and marked a completely new fresh start. The two cars bear very little resemblance, the new vehicle having been inspired by the manufacturer's new design language first seen in the Avantime. The new Mégane was voted European Car of the Year for 2003, fighting off stiff competition from Japan's Mazda 6 and PSA's Citroën C3, and achieved a 5-star safety rating in the EuroNCAP crash tests,the first small family carto do so.

The Mégane II and the Laguna were both showcases for a great deal of innovative technologies Renault launched at the beginning of the 2000s; the Renault Card keyless ignition system, standard on the Mégane II, was a first in this class and has since been widely adopted. Similarly, the option of a panoramic glass sunroof is another area in which Renault led where others followed.

In Brazil, Renault launched a flex-fuel version, called "Hi-Flex", which is able to run either with unleaded gasoline (petrol) or ethanol. Like the Brazilian Scénic and Clio versions, the Mégane's engine can work with any mix of gasoline and ethanol, due to the use of an electronic control module. The flex version has a 16V 109 hp (110 PS) (113 hp (115 PS) with ethanol) 1.6-litre inline-four engine developed and produced in Brazil, but the 2.0-litre version does not allow ethanol use, because its engine is made in France.

As with the previous Mégane, the range of models is wide; there is a three and five door hatchback available, named "Sport Hatch" and "Hatch" respectively, there is a 4-door saloon/sedan (Sport Saloon), a five-door estate (Sport Tourer / Grandtour), and to replace both the Mégane Coupe and Convertible, a new retractable hardtop coupe designed by Karmann.

The RenaultSport (RS) versions of the 3-door and 5-door Megane hatchbacks were introduced, equipped with a turbocharged petrol2.0 L 16v engine producing 225 PS (165 kW; 222 hp). Along with the engine, changes were made to the front and rear suspension geometry to improve handling, and the model features a deeper, wider front bumper. The Mégane Renault Sport competes in the hot hatchsegment of the market.

The model was revised in 2006, with changes in interior trim, specification levels and most notably, a new front nose. A new front suspension system borrowed from the Mégane 2.0 225 PS (165 kW; 222 hp) was adopted, improving the driving performance. Also, the Nissan Sentra B16 is based on the 2006 platform of the Renault Megane.

During its first full year of sales, the Mégane II topped the French sales charts, with 198,874 registered in 2003. It has also sold very well in Britain, being the nation's fourth most popular car in 2005 and the nation's fifth-most popular car in 2004 and 2006. In 2007, however, it dipped to eighth place with just over 55,000 examples being sold.

In 2010 it was reported that the Megane II had the highest rate of MOT failures in the UK for cars first taking the test in 2007. While in German ADACbreakdown statistics, the Megane scored very well, surpassing such cars as the Ford Focus, Honda Civic and Opel/Vauxhall Astra. The 2008 model achieved third place in its class after the BMW 1 and Audi A3. 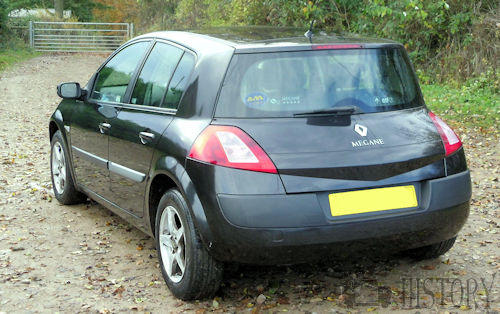