The Opel Manta is a sports passenger car of Adam Opel AG . The first Manta (Manta A) came in September 1970 on the market. The car is the coupe version of the two months later featured sedan Opel Ascona A with the same platform . With this coupe with water-cooled four-cylinder front engine and rear-wheel drive Opel competed with the built since late 1968 Ford Capri .

Under the working title "Project 1450" was developed in the late 1960s at Opel a rival model for the end of 1968 introduced Ford Capri . It emerged from the presented in September 1970 in Timmendorfer beach manta coupe, whose sedan version Ascona was presented two months later in Turin (Italy) in November 1970.

The success of the Mustang and the Capri Ford competitor General Motors did not idly, and so relatively short notice of the introduced in the autumn of 1966 Chevrolet Camaro was designed in response to the Ford Mustang, while Opel's Manta was targeted against the Capri.In autumn 1962, a model which has been Chevrolet Corvette named Stingray ( Stingray ) provided. Accordingly, the Mantarochen was allegedly named after the Opel Manta . In fact, commissioned by this in-plant project "longnose coupe" designer George Gallion was inspired by video footage and photos that Jacques Cousteau had made in the Red Sea by a Manta Ray.

From the beginning, the Opel advertising tried to stylize the technically strongly based on the Ascona sedan Manta to sporty men's car.The shape with the low waistline, a long bonnet and short tail gave the Manta a sporty look. The car followed the trend towards the end of the 1960s:

Initially, the Manta advertising slogan "Manta - developed from the European automotive tradition" was presented in the advertisement. Later with: "Opel Manta. Because you understand something about driving, or because you understand something about driving "and" Opel Manta. If ordinary cars are too boring for you. " The target group consisted primarily of young people. Opel offered with the initially three engines an alternative to the traditionally designed models such as the recordor the Ascona .

The Manta A had a self-supporting steel body with shock-absorbing rear and front end. From September 1970, the versions Manta, Manta L and Manta SR were available.The front wheels were suspended individually on unequal length wishbones with coil springs, telescopic shock absorbers and torsion bar stabilizer .

Rear axle was a rigid drawbar axle with coil springs as in 1967 Kadett B. This was also referred to by Opel as "central joint axis". The rear part of the propeller shaft from the universal joint was guided in a support tube, which was rigidly connected to the housing of the differential gear.

The Manta A was a fully synchronized four-speed gearbox with short gear shift on the center console installed, which was referred to in advertising as "sports circuit".

The Opel Manta was delivered in all versions as a five-seat sports coupe. Particularly noteworthy were the elongated, front-hinged bonnet and the rear end with four round taillights, the wide doors with frameless windows and the black grille with four round headlights. While Manta and Manta L were still delivered with hubcaps, the Manta SR had standard wheelless steel "sport wheels". The inmates of the Manta sat in a security cell with shock-absorbing safety steering column. The seats were well formed and comfortable. For a surcharge, a vinyl roof was available, but promoted the corrosion, as accumulated under the bonding moisture.

From October 1970 to July 1975, the Manta was sold under the name Opel 1900 (model years 1971/72) and Opel Manta (from model year 1973) in the United States. On offer were the Sport Coupe called base model, the rally as sporty made-up variant and from autumn 1973 the luxury with more equipment, corduroy covers and four-spoke steel sports wheels. All models were powered by Opel 1.9-liter four-cylinder, which at a compression of 7.6: 1 here 76 DIN horsepower (56 kW) made; for the model year 1975, the machine received a Bosch injection and thus came to 82 DIN horsepower (60 kW). Of the 1900 series (including Ascona A) about 170,000 units were sold in the US.

For engine selection included the above with manual and automatic transmission (for the 1.2-liter S-engine, there was only the manual transmission).

The Manta SR was the "rally version" of the Manta L for the sporty clientele. It differs from the other versions by other rims, a matte black bonnet and black side stripes ("rally stripes"). The instrumentation includes a tachometer and an additional console with clock, ammeter and oil pressure gauge; the front passenger sun visor of the SR does not have a make-up mirror. The SR was only offered with 80 hp and 90 hp engines, with the latter resulting in a change in the overall ratio to improved acceleration and increased mountaineering capability; for the SR equipment, the automatic transmission was not offered.

In March 1974, the Manta GT / E supplemented the model series. Its 1.9-liter engine produced thanks to electronically controlled intake manifold injection (Bosch L-Jetronic ) 77 kW (105 hp), which gave the GT / E a top speed of 188 km / h (according to factory specifications). Opposite the Manta SR, the GT / E has wider black side stripes, black window borders, which can not be seen on the photo below, special GT / E lettering, a front spoiler and a slightly lowered body. Because of the only one-year construction period of the GT / E only 5252 pieces were sold - for 12,500 DM, the last copies ran as Manta Black Magic with black paint and yellow / red stripes on front spoiler and sideline from the band.

A performance-enhanced model with the model name TE2800 was made by the Belgian company Transeurope Engineering, which filed for bankruptcy in 1975, in an edition of 79 pieces by the 2.8-liter engine of the Commodore was installed in the Manta. The engine produced a maximum of 105 kW (143 hp) and the vehicle reached a top speed of almost 200 km / h. The price was just under 20,000 DM. The TE was distributed through the company Irmscher.

The English dealer Opel Team (DOT) developed the DOT Turbo Manta, which was introduced in 1974. Only 28 units were built because the manufacturer of the turbocharger filed for bankruptcy. About seven have been preserved.

Opel itself tested a turbo version of the 1.9-liter engine based on the "low-lead" engine of the US Manta with 78 hp and built for testing purposes about 10 pieces. But the unsatisfactory response and the abrupt onset of the turbocharger (especially dangerous in turns, as the slight manta erupted quickly) meant the end for the turbo manta. No street legal turbo manta is known. 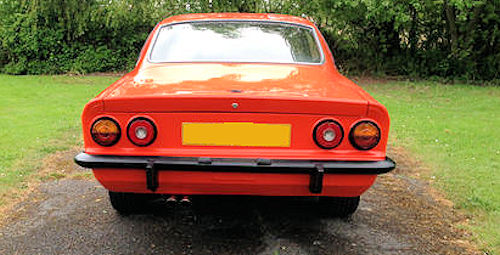