In August 1975, the Manta B was ready.Like its predecessor, this was again the coupe variant of the simultaneously presented Opel Ascona B and was technically largely the same. Both models were based on the ground group of their predecessors, the GM-H platform, which was redesigned for this generation of vehicles.

The Manta B had a longer wheelbase and a more elongated shape, large rectangular headlights and a built-in roll bar in the body. First there were the versions Manta, Manta L, Manta Berlinetta, Manta SR and Manta GT / E. Engine ratings ranged from 40 kW (55 hp) in the 1.2 N to 77 kW (105 hp) in the 1.9 E of the GT / E. External features of the GT / E were again the standard front spoiler, the matt black painted bonnet and black window surrounds. He had a sporty chassis with gas pressure shock absorbers. There was a sports steering wheel and additional instruments. In the Manta SR only the middle part of the bonnet was painted black.

For the model year 1978, the 1.9-S and 1.9-E engines were replaced by 2.0-liter engines. These engines were also in the Ascona and record, the injection engine in the Kadett C Coupé. The power ranged from 66 kW (90 hp) in the 2.0 N over 74 kW (100 hp) in the 2.0 S up to 81 kW (110 hp) in the 2.0 E. The latter was until the end of production of the Manta B. By far the most ordered engine by far and delighted the testers at its appearance with performance that matched or surpassed the nominally stronger Capri 2.3 S. The new engines had hydraulic tappets , which made the adjustment of the valve clearance unnecessary.

In October 1978, the Manta CC (Combi-Coupé) came with a large tailgate as Opel Monza. This was in the same equipment and with the same engines as the notchback Manta. The CC hatch was more expensive than the corresponding notchback variant.

In April 1979, the new engines with overhead camshaft also arrived in the Manta series . These engines had Opel for the 1979 Opel Kadett D presenteddeveloped. Feature of the new generation of engines were cross-flow cylinder heads made of light metal with overhead camshaft, the engine block was still made of gray cast iron.

The Manta initially offered a 1.3-liter engine with 44 kW (60 hp) and 55 kW (75 hp). The 1.6N, 1.9N and 2.0N 66 kW (90 hp) engines also remained in the program. Also on offer were the 2.0 S and the 2.0 E. New entry model was now the Manta GT-J. Externally, he corresponded largely to the GT / E, he also had a standard front spoiler, black window surrounds and could optionally be ordered with a matte black hood. In the interior there was a sports steering wheel and in addition tachometer, oil pressure gauge and voltmeter. The GT-J also had a sporty suspension, but without the gas pressure shock absorbers of the GT / E. The GT-J was recognizable by the corresponding lettering and characteristic side stripes. It was available with either the 1.3-S (55 kW, 75 hp) or the 2.0-S engine (74 kW, 100 hp).

The spring of 1980 brought a little facelift with it. Externally, the new models differed by black, plastic-coated bumpers from its predecessors with chrome bumpers. The Manta 2.0 S SR with 74 kW (100 hp) received on the rear panel a matte black paint, which extended between and around the taillights. The engine with intake manifold injection was now available not only in the Manta GT / E, but also in the "civilian" versions (Manta E). 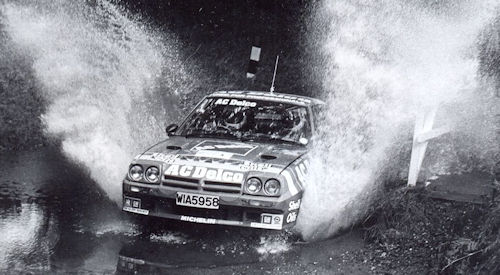 At the Geneva Motor Show in March 1981, the Manta 400 was introduced, this was the successor to the successful rally vehicle Ascona 400, in which Walter Röhrl 1982 driver world champion. The Manta 400 was actually a pure competition vehicle, which due to motor sport regulations of the then group Bbut in a quantity of at least 200 vehicles also in the normal market had to be offered. The Manta 400 was powered by a 2.4-liter engine with light metal cylinder head, four valves per cylinder and two overhead camshafts. As standard, the 960 kg rally car produced 106 kW (144 hp), but depending on the level of expansion, it could also be up to 200 kW (about 275 hp). Disc brakes on all wheels (ventilated in front) and a limited slip differential were included. By 1984, 245 copies of the Manta 400 were made. The buyer could choose between the so-called "narrow" body or the rally wide version with a wider GRPFront fenders and fender flares also made of GRP at the rear wheel arches. It also had wider tires: on the rear axle up to 285 mm wide tires on 15-inch Ronal wheels, on the front there were 225 mm wide tires. These tires, as well as the fender flares, made the vehicle look beefier. In addition, a prototype of the Manta 400 was built on the basis of the CC, which looked similar to the Irmscher i2800 and had the complete technology of the Manta 400.

In May 1982, the "new Manta" was at the dealers. Behind it hid only a facelift, with elements of the rally version of the Manta 400. There were now four cooling air openings instead of two. The spoiler bumper front and rear bumper were made of plastic and painted in the body color. The taillight housings were now black, not reddish brown.

On the GT / E side plastic skirts and a painted rear spoiler were added. The days of black hoods and rally stripes were over, chrome parts were sought on the new models now in vain. There were also new-design wheels and a slightly redesigned interior. Since spring 1981, Recaro sports seats were standard on the GT / E.Manta and Manta CC could in versions GT / J , Berlinetta and GT / E are ordered. The following engines were available: 1.3 S OHC (75 hp), a new 1.8-S OHC engine (90 hp).

From autumn 1982, a five-speed gearbox was available, which was standard in the GT / E. The 2.0 E engine was from then on equipped with the Bosch LE-Jetronic, electronic ignition and fuel cut. From autumn 1983, only the Manta GT and the Manta GT / E were on offer. The Manta GT replaced the previous GT / J and was now the entry level model. The 2.0 S engine was eliminated.

From April 1985, the Manta GSi Exclusiv was available, which was not available as a CC. This special model refined by Irmscher had special upholstery in the interior as well as a three-spoke leather steering wheel. The front was decorated with round twin headlights. Initially only the finishes Monacoblau or Dakargold were available. The alloy wheels had a special design (anthracite with silver edge) and a three-piece painted rear spoiler was standard. Between the taillights was a black bezel, and the license plate was integrated into the rear bumper. For a surcharge, a rear apron was available.In the summer of 1985 new upholstery fabrics were introduced, otherwise there were no changes.

From autumn 1986 accounted for the 1.3-S engine. Now only the Manta GT 1.8 S with 90 hp and the Manta GSi with 110 hp was on offer. From the summer of 1987 onwards, it was finally only possible to order the Manta GSI with 81 kW (110 hp), as well as the CC. Only the special model Exclusiv was still in the program as a further equipment variant. Optionally, the 2.0-E engine was also available with unregulated catalyst (Euronorm E1), This then made 107 hp.

In the meantime, some other special models were on offer, all of which were refined by the company Irmscher and some of which were also available through the Opel dealers. So the Manta i200 , which was available in white or astral silver paint with blue-red side stripes (Rothmans decor) and large rear wing . Built according to Irmscher 3074 copies. He was equipped with a slightly tuned 2.0-E engine, which made 92 kW (125 hp).

In addition, there were still exotic Irmscher special models, such as the Manta i240 with a 2.4-liter engine, of which only just under 600 vehicles were made. Particularly rare is the Manta i300 with the 3.0-liter six-cylinder from the Senator / Monza, of which only 27 copies originated.

In August 1988, the production of the Manta was finally discontinued after a total of 1,056,436 copies. With 13 years of production, the Manta B was the longest produced Opel model so far.Was succeeded at the IAA presented in 1989 and sold June 1990 Opel Calibra , which on the midsize sedan Vectra A based.

In motorsport , a Manta B achieved cult status, which since 23 April 1994 regularly participates in the 24-hour race at the Nürburgring . It is a vehicle of the model year 1981 due to the parts made of carbon fiber reinforced plastic blank weighs 930 kg, and by increasing the cubic capacity of 1.8 to 2 liters, and further engine tuning about 165 kW (225 hp). Another feature of the car piloted by owner Hans-Olaf Beckmann and former DTM driver Volker Strycek is the foxtail on the roof antenna.

As in August 1988, the last Manta B off the line, his technique was outdated with the originating from the Kadett B of 1967 rigid axle ( central joint axis ) and produced since 1965 CIH engines, although he in the last years with unregulated catalystand 5 -Gang- transmission was fitted. For Opel, the Manta was a success: from both model series together 1,056,436 cars were built.