The Kadett E (Vauxhall Astra Mark 2 in the United Kingdom) was introduced in August 1984, and was voted the 1985 European Car of the Year. The 1984 model was also developed into a more conventional three-box design with a boot (trunk),

The Opel Kadett E is a type of vehicle of the compact class the Adam Opel AG, which from August 1984 to May 1993 as a successor to the Opel Kadett D. It was the fifth model of the produced since mid-1962 series Opel Kadett / Astra. In the UK, this generation was already marketed as Vauxhall Astra. In just under nine years, a total of 3,779,289 copies ran off the line.

The cadet E was the last compact car from Opel in Germany with the traditional name Kadett. The successor model was named Astra (Astra F), while Vauxhall already sold the cadet in the UK under this name. In South Africa, the Astra F was further sold under the name Opel Kadett F.

At its market launch in August 1984, both the three or five-door hatchback versions, as well as the five-door station wagon. The latter was also offered in the three-door version as a van without rear side windows. The fifth generation of the Opel Kadett E came in 1984 as the successor to the Opel Kadett (D) on the market. It was offered with gasoline engines from 1.2 to 2.0 litres and a capacity of 40 to 115 kW and diesel engines with 1.5 to 1.7 litres and a capacity of 40 to 60 kW.

The cadet E also served as the basis for the January 1986 to July 1994 produced box van with the model’s name Opel Combo. While the van has the shape of the caravan, the combo with higher roof, longer wheelbase, rear leaf spring axle and its rear doors opening to the side. Transmission

The chassis of the Kadett E was only slightly modified from the previous model Kadett D taken. As a typical front-wheel drive compact car, it has independent suspension on MacPherson struts with lower wishbones front and a torsion beam rear axle. The gearbox has manual four-speed and five-speed vehicle transmissions. With some engines, a three-speed automatic transmission THM 125 of the parent company General Motors was available.

In May 1987, the last version, the Cabriolet was launched on the market, which was designed and built by Bertone. Because of its optimized in the wind tunnel streamlined body.

From model year 1988 the trip odometer and the quartz watch, as standard on all models available. In February 1989, the series received a facelift, which is externally recognizable by the smaller radiator grille.

In July 1991, the production of the last cadet series was completed. His successor got the name " Astra ". The only model variant remained until May 1993, the convertible in the program, before it was replaced in late summer by the open version of the Astra.

The Opel Kadett E was only offered with front transversely mounted four-cylinder engines. Except for the GSi 16V with two overhead camshafts and 16 valves and the 1.2-liter OHV engine, they have an overhead camshaft and eight valves:

badged as the Vauxhall Belmont in the United Kingdom, launched at Frankfurt 1985. This was awarded the 1985 Semperit Irish Car of the Year in Ireland. There was a station wagon called the "Caravan" available, with either three or five doors. In South Africa, the Kadett notchback was sold as the Opel Monza, along with a convertible. This replaced the Opel Ascona.

A convertible version was also available, for the first time in 1987, built by Bertone of Torino/Italy, bringing it to line with competitors, such as the Ford Escort and Volkswagen Golf. For the 1988 model, capacities were raised to from 1.3 to 1.4 litres.The convertible variant of the Kadett E produced at Bertone in Turin was from August 1991 and equipped in weaker engine variants with the body details of the cadet GSi.Due to production problems of the successor Astra Cabrio, the cadet convertible was produced until May 1993, while the production of the other models was discontinued in July 1991. Shortly before the end of production there were only special models of the cadet convertible.

In the fall of 1986 a new 1,998 cc engine replaced the 1.8 hitherto used on the GSi and Vauxhall Astra GTE in many markets, although the 1.8 continued to be sold in some places. In 1988, a 16-valve twin-cam version was developed for a high-performance GSi/GTE model, yielding 156 PS (115 kW) in non-catalyzed form, six less horsepower with a catalytic converter fitted. 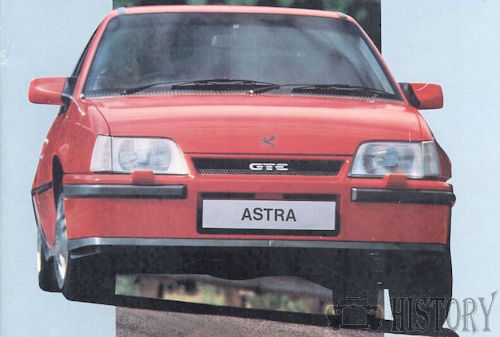 While criticized for a lack of refinement, the GSi 16V was also lauded as the most powerful car available in its class at the time. Aside from the "16V" badging, it could be told from an eight-valve GSi by its twin rectangular exhaust pipes.

The Kadett E has been seen as a grey import in the United Kingdom, but it is quite rare compared to its badge engineered sister, the Vauxhall Astra Mk II. It was never officially sold in Britain, and by 1989, General Motors was only marketing the Vauxhall brand in the United Kingdom, although Astras assembled at Vauxhall's Ellesmere Port plant were exported to the rest of Europe badged as Opel Kadetts. There was also a van version with a raised roof, called the Opel Kadett Combo.

The car was also sold under the following names:

The Kadett E was introduced in Brazil as the Chevrolet Kadett, but the three-door station wagon (later also five-door) was called the Chevrolet Ipanema. Brazilian production commenced in April 1989, with the Ipanema being added in October of the same year. From 1992 Brazilian Kadetts/Ipanemas received fuel injection. Brazilian cars received either 1.8 or 2.0-litre petrol fours.

In the early 1990s, South African Kadett GSi's were further upgraded based on their success in production car racing and initially 500 special units were built as road cars for homologation purposes. This was a minimum requirement for entry into the Stannic Group N races. They went against BMW's 325iS (A 2.7 litre homologation special from BMW). They featured more aggressive 276-degree camshafts made by Schrick with 2 different settings for timing overlap (110° and 107°), revised intake and exhaust modifications (4-in-1 branch manifold and freeflow exhaust), Irmscher spring kit, modified engine management system by Promotec, a limited slip differential developed by Andre Verwey and special Aluett 7Jx15-inch ET35 alloy wheels, they were nicknamed the "Superboss" and held the world record for the most torque per litre (114 Nm per litre) for a naturally aspirated car until 2009 being beaten by the Ferrari 458 (117 Nm per litre). After the first 500 units were produced, many more were built to satisfy public demand.

The Kadett E formed the basis of the Daewoo LeMans (later known as the Daewoo Cielo, Racer and Nexia) in South Korea, Nexia being the hatchback version), which was sold in the United States and New Zealand as the Pontiac LeMans, and in Canada (initially) as the Passport Optima. LeMans sales ended in 1993. The Nexia is still being produced at UzDaewoo plant in Asaka, Uzbekistan. The Cielo was last being produced at Automobile Craiova, a semi-independent (from GM) plant in Craiova, Romania. Their license expired in the fall of 2006. 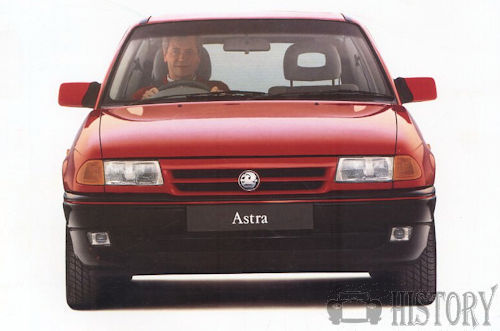