The Opel Monza is a sports coupe of the car manufacturer Opel , which was built from February 1978 to June 1986. It was derived as a three-door coupe from the Opel Senator A and also experienced the same model care measures.

In September 1977 Opel presented the models Senator and Monza at the IAA in Frankfurt, which then came in April 1978 on the market.Sharing the same layout as the Senator A1 Initially, the 2.8 -liter carburetor and the 3.0 -l injection engine were available, followed in the summer of 1978, a 3.0 -liter petrol engine, with the first generation the larger 3.0E engines in the Monza A1 did suffer from overheating problems in parked traffic. The Senator is a saloon sedan with four doors, while the Monza a three-door coupe , with a large tailgate, which on a base assembly with a shorter by 25 mm wheelbase is based, the smaller the model series record E and Commodore Coriginates. The striking B-pillar of the Monza is designed as a roll bar. The Rekord E1 supply of parts such as seats,and various other items such as guages and other trim, later all parts of the interior were coloured and more plush.

The first version of the Monza A1 was built almost unchanged until April 1981.4-speed manual gearbox from Getrag (264) was fitted to early cars later car came fitted with the 5-speed manual Getrag (265) depending on model. Then in May 1981  (as the same time the Senator), the intermediate model comes with A1 + flow cheaper outside mirrors, a modified dashboard and new fabric covers, but that was not provided with bumpers made of chromed steel.

Also, the Monza received the 2.5-liter injection engine of the Commodore C, which came here to 100 kW (136 hp) performance (the Commodore: 96 kW / 130 hp) and the 2.8 S replaced. The 3.0 S remained until July 1982 in the program The"S" version came with LSD 15-inch Ronal alloy wheels. Until the revision in November 1982, only in-line six-cylinder engines were installed. 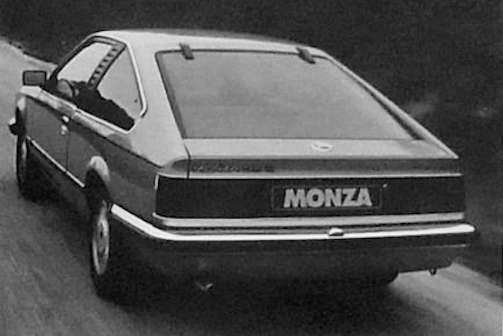