The Morris LD-Van Just like its predecessor and the smaller Morris J-type, it was a van fitted with two front sliding doors in cab-over with 1000 kg (LD1) and 1500 kg (LD2) payload.

The 2199 cc petrol engine with 34 kW power and 97 Nm max torque.Engine was placed between the driver's and front passenger's seats to create a level floor and transmit power to the rear axle via a four-speed manual transmission. As a result, in addition to the van and minibus, the sturdy chassis with four crossbeams could be used for a variety of bodies. Thus, in addition to an ambulance  was offered ex factory, while various bodies were produced by other manufacturers.

After Morris merged with the Austin Motor Company in 1952 to become British Motor Corporation , BMC decided to discontinue its own commercial vehicle development and production from Austin. Thus, after the Austin K8 was discontinued in December 1954, the Austin 1000/1500 kg van was produced using badge engineering .

In January 1956, the LD1 with petrol engine cost £ 722 incl. Purchase Tax, The purchase tax was a 33% tax on commercial vehicles introduced in May 1950, with the exception of ambulances and various municipal and emergency vehicles. The LD2 with gasoline engine launched at £758 . The surcharge for the diesel engine was 36 or 37 pounds. After the purchase tax was abolished, prices in June 1959 were £ 694 and £ 728 for the gasoline engine and £ 799 and £ 833 for the diesel engine.

A major overhaul took place in April 1960 with a now synchronized 4-speed manual transmission among other minor technical changes and modified grille. The type designation was now on the one-ton payload model LD4 (gasoline) and LD04 (diesel) and similarly the 1.5 ton models LD5 and LD05. As part of a restructuring in the commercial vehicle sector from 1961 models LD-M20 one ton and LD-M30 1.5 ton based on the English name for payload in Cwt.

1963 was a revision of the engines to more power and lower fuel consumption. The dashboard and parts of the interior has been modernized. However, the most noticeable was the revised front with a more pleasing and modern design. Similarly, the model name was changed to 240 / 260LD and 340 / 350LD, indicating the total weight after subtracting zero. Due to new regulations and modified tires for higher carrying weight, the total weight of the 350 LD changed to just over 3600 kg. At the same time, the series was also offered as a BMC LD Van . After the start of the Austin JU 250 In 1967, the production of the Austin model was reduced in the same year to the range of 2.6 tonnes total weight model 260 LD. 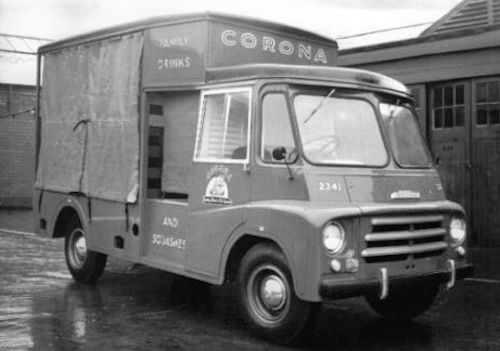