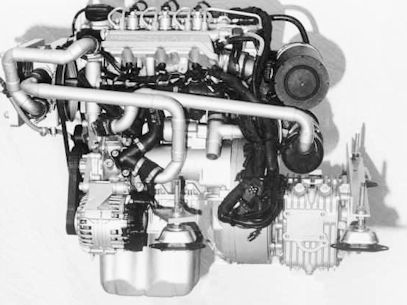 The engine type OM 660 is a diesel engine from Mercedes-Benz with a capacity of 799 cc used in the Smart range. The production of the three-cylinder in - line engine began in 1998 in the former DaimlerChrysler -Werk Berlin-Marienfelde , before the production was moved in 2007 in Thuringia Kölleda to Daimler subsidiary MDC Power was relocated. The final assembly is carried out on behalf of Smart by ThyssenKrupp Automotive in one of the four branches of the cross-shaped Smartville plant in Hambach (Lorraine).

The engine has a turbocharger with a maximum boost pressure of 0.8 bar, two valves per cylinder and a camshaft in the cylinder head .

With its capacity of initially 30 kW (41 hp) at 4200 min -1 it is one of the less powerful and efficient car engines. The smart cars equipped with this unit ( coupé and convertible two-seater model ForTwo) bear the name CDI at the rear, which is used at Mercedes-Benz for all vehicles with common rail direct injection . The internal model designation OM 660 is derived from that used in Mercedes vehicles for diesel engines O el M for chronologically consecutive numbering.

The engine is a so-called block engine . Locked with the engine is the gearbox , which is an electrically controlled and programmable by different software equipment in several variants and operable semi-automatic transmission. The principle Baubauskostengleichen automatic dialing versions of the same block engine concept are marketed as superior and sold to end customers for a significant additional price.

A criticism of this drive concept was the sluggish shift behavior of the automatic in the early years of the Smart. By changing the gearbox design, this topic can now be regarded as a constructive solution.

After the elimination of the three-liter vehicles of the VW Group ( VW Lupo 3L diesel, Audi A2 TDI) is the smart engine with a nominal consumption of 3.3 liters of diesel per 100 km of the most economical (as of mid-2007) car production engine in running production.

For the new edition of the "Smart ForTwo" with 20 centimeters more length started in 2007, the performance of the small diesel engine was increased to 33 kW (45 hp) and in the course of model maintenance from model year 2011 to 40 kW (54 hp). The power increase is achieved by a new common-rail injection system with 1600 bar minimum injector pressure. With an emissions of less than 90 grams of CO 2 , this engine type is well positioned in the current environmental protection discussion.

Just like the smart gasoline engine M 160 (also developed by Mercedes-Benz), the OM 660 is offered by the supplier Ecofly as an aircraft engine for ultralight and light aircraft as well as for motor gliders. Among other things, it is used in the B & F FK 9 . For this purpose, Ecofly has developed a complete electronic conversion kit with the support of Mercedes-Benz. With the model variant 'FK9 smart' of the B & F FK 9, for the first time an ultralight aircraft was equipped as standard with smart engines at B & F Technik Vertriebs GmbH.