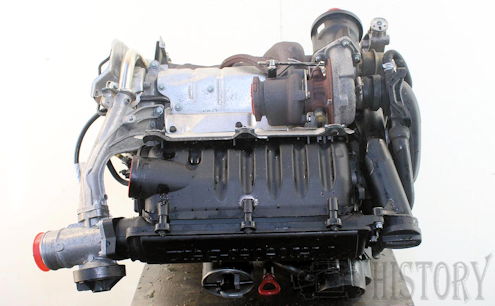 The OM 668 has a common-rail injection . In contrast to the simultaneously built gasoline engine M 166 in four-valve technology (16V). The valve control of the two overhead camshafts via a timing chain (duplex roller chain ), which drives the intake camshaft; From there, a spur gear drives the exhaust camshaft. Another (single) roller chain connects the crankshaft to the oil pump. All variants are with engine charging and - with the exception of 44 kW / 60 hp engines - intercoolerfitted. The then smallest diesel engine from Mercedes has a capacity of 1689 cc (bore 80 mm × stroke 84 mm).

In both models, the transversely mounted engine drives the front wheels ( front wheel drive ). As with the gasoline engine power is transmitted via a five-speed manual or a five-speed automatic transmission.

Mechanically, the engines are all the same, but the first A 160 CDI has no intercooler. For model maintenance, only the camshaft and the turbocharger were revised, which is why the performance increased slightly. The torque did not increase, because the A 170 CDI was throttled with regard to the weakly dimensioned clutch in the torque.

Through this throttling, the power can be increased to about 88 kW (120 hp) and the torque to over 200 Nm with just a few interventions in the engine electronics ( chip tuning ). The already long service life of the engine does not suffer from this; However, the weak A-class clutch is exposed to very high loads.