The car was initially available as a four-door sedan (sedan) and two-door coupe. This had the same four-cylinder OHC series engine in Europe with 1,586 cc and 75 hp (55 kW) as the 616. Engine power was transmitted to the rear wheels via a manual four-speed mid-gear transmission and a propeller shaft.

In 1976, the first model update. With the most important change for Europe was the new engine with 1272 cc and 60 hp (44 kW) instead of the (initially available) 1.6 -liter R4 engine could be ordered. Cosmetic changes involved round headlamps instead of the previous rectangular headlamps, minor retouchings on the bodywork trim, and new-design rims. As an additional body variant , a 5-door station wagon was offered under the name Variable . The sedan with 1.3-l R4 engine could be ordered on request with a three-speed automatic.

From 1972 to 1978, the Mazda 818 was offered in all body styles with dual-disc Wankel engine and modified body front than RX-3 . This model variant has not been available in all markets and has been sold in Japan, the USA, Australia and New Zealand under the model name Savanna .1979, The 818 Coupe or RX-3 coupe was replaced with the new Mazda RX-7 , the sedan was replaced by the new Mazda 626 and the estate by the new Mazda 929 .

The Mazda RX-3 was a built from 1972 to 1978  model of the Japanese car manufacturer Mazda with twin-disc rotary engine of 491 or 573 cc chamber volume. Offered were a four-door sedan, a two-door coupe and a five-door station wagon. The RX-3 was a trim and engine variant of the Mazda 818 . In Japan, the model was sold under the name Mazda Savanna . 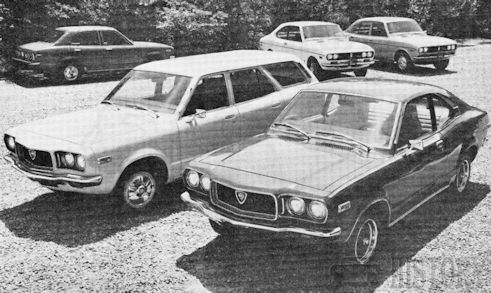