Series 1 (1978–1980) is commonly referred to as the "SA22C" from the first alphanumerics of the vehicle identification number. This series of RX-7 had exposed steel bumpers and a high-mounted indentation-located license plate, called by Werner Buhrer of Road & Track magazine a "Baroque depression." In Japan it was introduced in March 1978, replacing the Savanna RX-3. The lead designer at Mazda was Matasaburo Maeda, whose son Ikuo would go on to design the Mazda2 and Mazda RX-8.

In May 1980, Mazda released 2,500 special North American models known as the LS (Leather Sport). This package was essentially an uprated GS model with added LS badges on each B-pillar, special striping, and LS-only gold anodized wheels (with polished outer face and wheel rim). All LS editions came equipped with special LS-only full brown leather upholstery, leather wrapped steering wheel, leather wrapped shift knob, removable sunroof, LS-specific four-speaker AM/FM stereo radio with power antenna (though listed as a six speaker stereo, as the two rear dual voice coil speakers were counted as four speakers in total), remote power door side mirrors, and other standard GS equipment. Two primary options were also available; a three-speed JATCO 3N71B automatic transmission and air conditioning. Other GS options such as cassette tape deck, splash guards, padded center console arm rest and others could be added by the dealer. The LS model was only ever available in three different exterior colors: Aurora White (1,000 made), Brilliant Black (1,000 made) and Solar Gold (500 made). Production estimates in parenthesis are widely accepted estimations per color, though no official production records are known to exist or to have been released, aside from the total combined production figure of 2,500 units.

The Series 2 (1981–1983) had integrated plastic-covered bumpers, wide black rubber body side moldings, wraparound taillights and updated engine control components. The GSL package provided optional four-wheel disc brakes, front ventilated (Australian model) and clutch-type rear limited slip differential (LSD). Known as the "FB" in North America after the US Department of Transportation mandated 17 digit Vehicle Identification Number changeover. For various other markets worldwide, the 1981–1985 RX-7 retained the 'SA22C' VIN prefix. In the UK, the 1978–1980 series 1 cars carried the SA code on the vehicle VIN but all later cars (1981–1983 series 3 & 1984–1985 series 3) carried the FB code and these first generation RX7's are known as the "FB". The license-plate surround looks much like Buhrer's "Styling Impressions."

The Series 3 (1984–1985) featured an updated lower front fascia. North American models received a different instrument cluster (the NA S3 RX-7 is the only rotary-engined car to not have a centrally mounted tachometer). GSL package was continued into this series, but Mazda introduced the GSL-SE sub-model. The GSL-SE had a fuel-injected 1.3 L 13B RE-EGI engine producing 135 hp (101 kW) and 135 lb·ft (183 N·m). GSL-SEs had much the same options as the GSL (clutch-type rear LSD and rear disc brakes), but the brake rotors were larger, allowing Mazda to use the more common lug nuts (versus bolts), and a new bolt pattern of 4x114.3 (4x4.5"). Also, they had upgraded suspension with stiffer springs and shocks. The external oil cooler was reintroduced, after being dropped in the 1983 model-year for the controversial "beehive" water-oil heat exchanger.

In 1985 Mazda released the RX7 Finale in Australia. This was the last of the series and brought out in limited numbers. The Finale featured power options and a brass plaque mentioning the number the car was as well as "Last of a legend" on the plaque. The finale had special stickers and a blacked out section between the window & rear hatch.

The handling and acceleration of the car were noted to be of a high caliber for its day. This generation RX-7 had "live axle" 4-link rear suspension with Watt's linkage, a 50/50 weight ratio, and weighed under 2,500 lb (1,100 kg). It was the lightest generation of RX-7 ever produced. 12A-powered models accelerated from 0–60 mph in 9.2 s, and turned 0.779 g (7.64 m/s²) laterally on a skidpad. The 12A engine produced 100 hp (75 kW) at 6,000 rpm, allowing the car to reach speeds of over 120 miles per hour (190 km/h). Because of the smoothness inherent in the Wankel rotary engine, little vibration or harshness was experienced at high engine speeds, so a buzzer was fitted to the tachometer to warn the driver when the 7,000 rpm redline was approaching.

The 12A engine has a long thin shaped combustion chamber, having a large surface area in relation to its volume. Therefore, combustion is cool, giving few oxides of nitrogen. However, the combustion is also incomplete, so there are large amounts of partly burned hydrocarbons and carbon monoxide. The exhaust is hot enough for combustion of these to continue into the exhaust. An engine driven pump supplies air into the exhaust to complete the burn of these chemicals. This is done in the "thermal reactor" chamber where the exhaust manifold would normally be on a conventional engine. Under certain conditions the pump injects air into the thermal reactor and at other times air is pumped through injectors into the exhaust ports. This fresh air is needed for more efficient and cleaner burning of the air/fuel mixture.

Options and models varied from country to country. The gauge layout and interior styling in the Series 3 was only changed for North American versions. Additionally, North America was the only market to have offered the first generation RX-7 with the fuel-injected 13B, model GSL-SE. Sales of the first generation RX-7 were strong, with a total of 474,565 first generation cars produced; 377,878 (nearly eighty percent) were sold in the United States alone. In 2004, Sports Car International named this car seventh on their list of Top Sports Cars of the 1970s. In 1983, the RX-7 would appear on Car and Driver magazine's Ten Best list for the first time in 20 years. 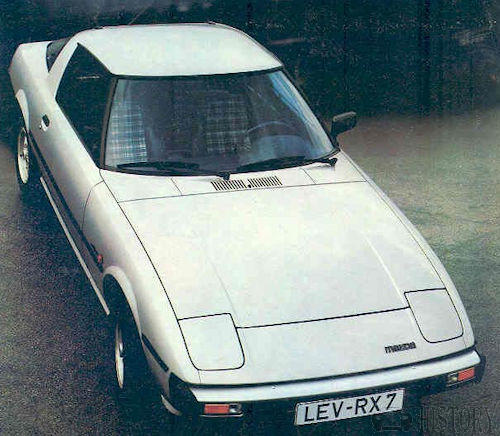 Following the introduction of the first turbocharged rotary engine in the Luce/Cosmo, a similar, also fuel injected and non-intercooled 12A turbo engine was made available for the top-end model of the series 3 in Japan. It was introduced in September 1983. Power is 165 PS (121 kW) JIS at 6,500 rpm. While the peak power figures were only somewhat higher than those of the engine used in the Luce/Cosmo, the new "Impact Turbo" was developed specifically to deal with the different exhaust gas characteristics of a rotary engine. Both rotor vanes of the turbine were remodelled and made smaller, and the turbine had a twenty percent higher speed than a turbo intended for a conventional engine. The Savanna Turbo was short-lived, as the next generation RX-7 was just around the corner. 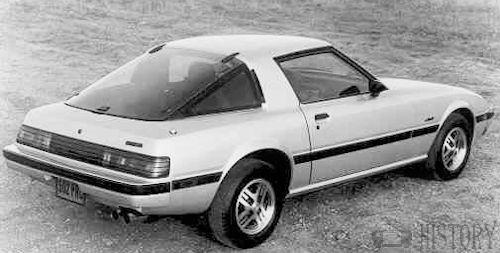