The Lamborghini Aventador is a mid-engined sports car produced by the Italian manufacturer Automobili Lamborghini.

Launched on 28 February 2011 at the Geneva Motor Show, five months after its initial unveiling in Sant'Agata Bolognese, the vehicle, internally codenamed LB834, was designed to replace the ten-year-old Murciélago as the new flagship model.

Soon after the Aventador unveiling, Lamborghini announced that it had already sold over 12 of the production vehicles, with deliveries starting in the second half of 2011.

The Aventador was designed by Lamborghini Centro Stile under the directorship of Italian designer Filippo Perini. Similar to the earlier limited-edition Lamborghini Reventon, its heavy use of sharp creases and planar surfaces are indicative of Lamborghini's contemporary styling direction which were directly inspired by the aircraft of the United States Military's Stealth Fighter Program, namely the F-117A Nighthawk and the F-22 Raptor.

In keeping with Lamborghini tradition, the Aventador is also named after a fighting bull. Aventador was a bull that fought particularly valiantly in the bull ring of Saragossa, Spain in 1993.

Production will be limited to 4,000 units (4,099 Murciélagos were built). The molds used to make the carbon-fibre monocoque are expected to last 500 units each and only 8 have been made. The base price of the Aventador is $393,695.

Its transmission, a single-clutch seven-speed semi-automatic, is built by Graziano Trasmissioni. Despite being single-clutch, gear-shifts are accomplished in 50 milliseconds.

The new, electronically controlled, all-wheel drive system is developed and supplied by the Swedish company Haldex Traction, offering traction and handling capabilities based on their 4th generation technology.

The removable roof consists of two carbon fiber panels, weighing 6 kg (13 lb) each, which required the reinforcement of the rear pillar to compensate for the loss of structural integrity as well as to accommodate the rollover protection and ventilations systems for the engine. The panels are of easy removal and are stored in the front luggage compartment. The Aventador Roadster has a unique engine cover design and an attachable wind deflector to improve cabin airflow at high speed as well as a gloss black finish in the A-pillars, windshield header, roof panels, and rear window area. The car has a US$441,600 base price. With a total weight of 1,625 kg (3,583 lb) it's only 50 kg (110 lb) heavier than the coupé (the weight of the roof, plus additional stiffening in the sills and A-pillars).

Six months after unveiling the Aventador, plans for a roadster version were leaked by the U.S. EPA after it included the model on a data sheet on its website. Lamborghini officially unveiled the Aventador J to the world at the 2012 Geneva Motor Show. The roofless and windowless concept car uses the same V12 engine as the standard Aventador, producing 700 hp through a lightweight seven-speed automated transmission. The car does not have air conditioning or radio to save further weight for a total of 3,472 pounds (1,575 kg). The car presented at the Geneva show was the only unit to be produced, and was sold for US$2.8 million. Another Limited Edition model was made for Shaikh Al Yahyaa and was sold at an unknown price. The car was specially made for a close relation.

The J designation was thought to have come from Appendix J in the FIA rulebook that describes the technical specifications of race cars. However, during an interview with designer Filippo Perini, it was revealed that the 'J' actually stands for Jota, in reference to a 1970s one off Lamborghini Miura Jota, which also conformed to the FIA's Appendix J regulations.

It is a version of Aventador LP 700-4 coupé with blue and white body colour scheme from Boeing 787 Dreamliner, pitch-black wheels.

The vehicle was unveiled in 2012 Aerospace & Defense Supplier Summit.

The coupe was unveiled in 2013 Shanghai Motor Show.

The roadster was unveiled in 2013 Quail Motorsports Gathering.

An Aventador was made for Bologna Airport with white body colour, red and white chequered flag decals on the sides, a light bar on the roof and 'FOLLOW ME' written on the hood.

The vehicle was unveiled in Bologna Airport between 6 May 2013 and 19 May 2013 and was used to guide aircraft around the airport. It was also used in Heathrow Airport, London, as an airport vehicle for a single day.

Automotive magazines such as Car and Driver and Motor Trend reviewed the Aventador. Car and Driver titled their article "The best Lamborghini ever." Motor Trend described it as "the friendliest V-12 supercar in the world." Praise for Lamborghini's all-new V-12 powerplant centered on the engine's responsiveness, torque, and smooth power output. Criticism centered mainly around the Aventador's unrefined single-disc clutch.

On 31 July 2011, the Aventador was reviewed by the motorsport show Top Gear. Host Richard Hammond was impressed with the performance and handling of the car. His biggest complaint was a nostalgic poke at the Aventador's accessible temperament, implying that it left him longing for the "danger" associated with driving previous Lamborghini supercars The Aventador posted the fifth fastest time ever recorded on the Top Gear test track with a time of 1:16.5, beating the $2,000,000 Bugatti Veyron Super Sport, the Ferrari Enzo, the Porsche 911 GT3, and other supercars from around the world. In season 18 of the program, cohost Jeremy Clarkson said that the Aventador is better than the Ferrari 458 Italia (which they had previously called the best super car ever), describing it as being "£200,000 worth of dreams." The Aventador won the "Supercar of the Year 2011" from Top Gear.

BMC Switzerland produced a limited (50 units) edition of Lamborghini 50th Anniversary Edition impec bicycles inspired by the Lamborghini Aventador. The vehicle was sold for €25,000 (US$32,000) via international BMC or Lamborghini dealer network, with delivery done by the dealer. 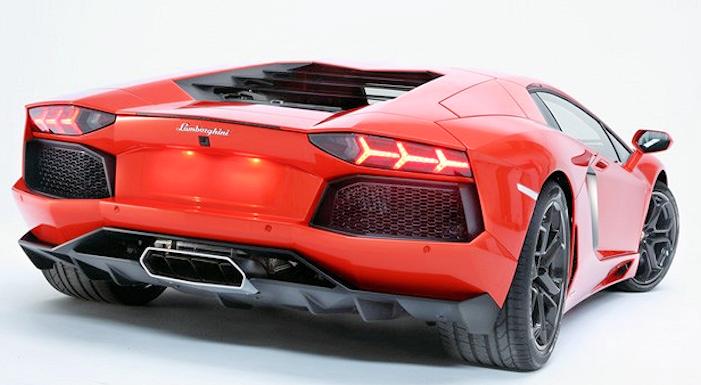 More information on
Lamborghini Aventador car history and specs From 2011